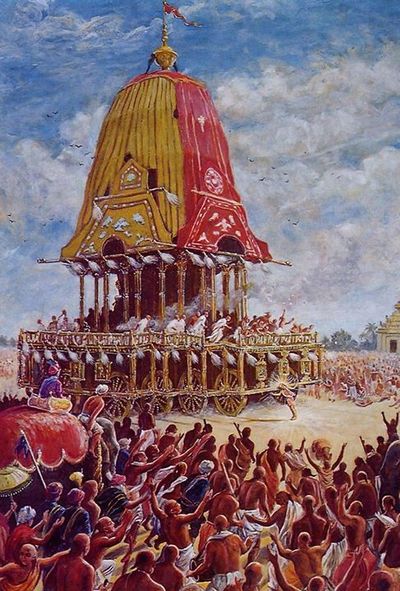 On the auspicious day of Jagannatha Ratha-yatra in Puri, two of Lord Chaitanya’s most confidential associates, Srila Svarupa Damodara Gosvami and Srila Sivananda Sena, left this world to return to the supreme abode.

“Svarupa Gosani is the most intimate associate of the Lord. He therefore knows all these topics well.” (Cc Adi 4.105)

In the purport to this verse, Srila Prabhupada tells us about Svarupa Damodara’s historyand identity: “Prior to the Lord’s acceptance of the renounced order, Purusottama Bhattacarya, a resident of Navadvipa, desired to enter the renounced order of life. Therefore he left home and went to Benares, where he accepted the position of brahmacarya from a Mayavadi sannyasi. When he became a brahmacari, he was given the name Sri Damodara Svarupa. He left Benares shortly thereafter, without taking sannyasa, and he came to Nilacala, Jagannatha Puri, where Lord Caitanya was staying. He met Caitanya Mahaprabhu there and dedicated his life for the service of the Lord. He became Lord Caitanya’s secretary and constant companion. He used to enhance the pleasure potency of the Lord by singing appropriate songs, which were very much appreciated.”

In the context of Lord Chaitanya’s experience of the Ratha-yatra in Puri, Sri Caitanya-caritamrta (Madhya13.168) confirms:

“Svarupa Damodara used to sing exactly according to the ecstatic emotion of the Lord. Whenever a particular mellow was being tasted by Sri Caitanya Mahaprabhu, Svarupa Damodara would personify it by singing.”

Srila Prabhupada’s purport continues: “Svarupa Damodara could understand the secret mission of Lord Caitanya, and it was by his grace only that all the devotees of Lord Caitanya could know the real purpose of the Lord.

Sivananda Sena is another confidential associate of the Lord who also assisted Him in His pastimes, especially at the time of the Puri Ratha-yatra. He is one of the important branches of the Chaitanya tree.

“Sivananda Sena, the twenty-fourth branch of the tree, was an extremely confidential servant of Lord Caitanya Mahaprabhu. Everyone who went to Jagannatha Puri to visit Lord Caitanya took shelter and guidance from Sri Sivananda Sena.

“Every year he took a party of devotees from Bengal to Jagannatha Puri to visit Lord Caitanya. He maintained the entire party as they journeyed on the road.” (Cc Adi 10.54–55)

In a purport in the same part of Sri Caitanya-caritamrta (Adi 10.60), which describes Sivananda Sena, Srila Prabhupada writes, “Srila Sivananda Sena has been described by Srila Bhaktisiddhanta Sarasvati Maharaja as follows: ‘Sivananda Sena was a resident of Kumarahatta, which is also known as Halisahara, and was a great devotee of the Lord. About one and a half miles from Kumarahatta is another village, known as Kancadapada, in which there are Gaura-Gopala Deities installed by Sivananda Sena, who also established a temple of Krsnaraya that is still existing. Sivananda Sena was the father of Paramananda Sena, who was also known as Puri dasa or Kavi-karnapura. Paramananda Sena wrote in his Gaura-ganoddesa-dipika (176) that two of the gopis of Vrndavana, whose former names were Vira and Duti, combined to become his father. Srila Sivananda Sena guided all the devotees of Lord Caitanya who went from Bengal to Jagannatha Puri, and he personally bore all the expenses for their journey. This is described in the Caitanya-caritamrta, Madhya-lila, Chapter Sixteen, verses 19 through 27. Srila Sivananda Sena had three sons, named Caitanya dasa, Ramadasa, and Paramananda. As mentioned above, this last son later became Kavi-karnapura and wrote the Gaura-ganoddesa-dipika. His spiritual master was Srinatha Pandita, who was Sivananda Sena’s priest. Due to Vasudeva Datta’s lavish spending, Sivananda Sena was engaged to supervise his expenditures.’

“Once, while going to Jagannatha Puri, all the devotees had to stay underneath a tree, without the shelter of a house or even a shed, and Nityananda Prabhu became very angry, as if He were greatly disturbed by hunger. Thus He cursed Sivananda’s sons to die. Sivananda’s wife was very much aggrieved at this, and she began to cry. She very seriously thought that since her sons had been cursed by Nityananda Prabhu, certainly they would die. When Sivananda later returned and saw his wife crying, he said, ‘Why are you crying? Let us all die if Sri Nityananda Prabhu desires.’ When Sivananda Sena returned and Srila Nityananda Prabhu saw him, the Lord kicked him severely, complaining that He was very hungry, and asked why he had not arranged for His food. Such is the behavior of the Lord with His devotees. Srila Nityananda Prabhu behaved like an ordinary hungry man, as if completely dependent on the arrangements of Sivananda Sena.

“A nephew of Sivananda Sena’s named Srikanta left the company in protest of Nityananda Prabhu’s curse and went directly to Sri Caitanya Mahaprabhu at Jagannatha Puri, where the Lord pacified him. On that occasion, Lord Caitanya Mahaprabhu allowed His toe to be sucked by Puri dasa, who was then a child. It is by the order of Caitanya Mahaprabhu that he could immediately compose Sanskrit verses. During the misunderstanding with Sivananda’s family, Sri Caitanya Mahaprabhu ordered His personal attendant, Govinda, to give them all the remnants of His food. This is described in Antya-lila, Chapter Twelve, verse 53.”

As Svarupa Damodara Gosvami is considered to be the incarnation of Lalita-devi, the direct expansion of Srimati Radharani and one of Her most confidential gopi friends, Sivananda Sena is considered to be the incarnation of two gopis of Vrindavan in krsna-lila. In Lord Chaitanya’s pastimes, Sivananda Sena played the part of a householder. He was very concerned for the welfare of all the devotees, and every year he would make the arrangements for the devotees to travel from Bengal to Jagannatha Puri during the rainy season to meet Sri Chaitanya Mahaprabhu. He took care of them in every respect. He would arrange for their transportation, accommodations, and prasada. Although they mainly walked, when they came to rivers that they had to cross by boat, he would pay the tolls and taxes. From his example we can understand the importance of service to the Vaishnavas. Sivananda Sena pleased Sri Chaitanya Mahaprabhu to the greatest extent just by being a humble servant of the Vaishnavas—not only by being a humble servant, but by being expert in his service of taking care of them and pleasing them.

Sri Caitanya-caritamrta, Antya-lila, Chapter One begins by describing how all the devotees departed together for Jagannatha Puri. They assembled in Navadvipa, offered respects to Sachimata, and then prepared to leave.