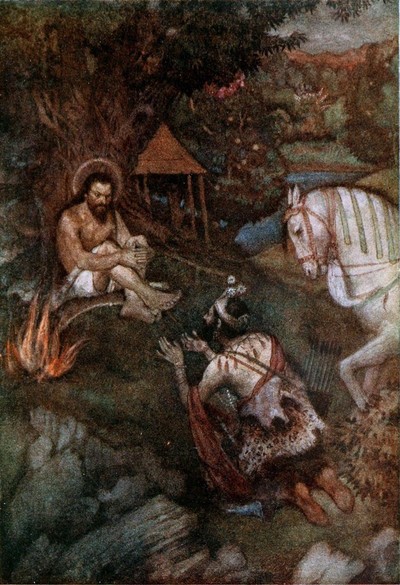 We may be surprised to learn that many things we consider as acts of spiritual advancement in Krishna consciousness, like tapasya or austerity, are actually acts of selfishness, and will impede our real growth. Even following the four regulative principles in certain ways, can divert us.

“So this austerity is called tapasya, denial, self-denial” (class on SB. 5.5.1 in Vrndavana, Oct 23, 1976). To give up certain forms of selfishness is required to progress in spiritual life, and this is usually accompanied by some discomfort and hurt; or should it be? If we do not know how austerity works for us, then our transition from lust to love can be a most tortuous affair. But, as they say: “no pain, no gain”

At one stage during early Christian times, self-denial meant to avoid taking a bath. Anything enhancing the bodily appearance was considered sinful. In fact, to be dirty and dirtier was a sign of holiness. The more lice that crawled over the body – which were called pearls of God – the more saintly one became. St Paula said of the time: “The purity of the body, and its garments, means the impurity of the soul” (Havelock Ellis, Studies in the psychology of sex, Vol. IV, p 31).

I remember as a young devotee while staying at Chaitanya College, I went out on sankirtana daily with a senior devotee. During the bitter cold of mid-winter, this devotee would never allow the heater in the car to be put on. Rather, he kept the ventilators open to let the cold air inside, “to encourage us to keep off the bodily platform”. Was there not such a thing as utilising everything in Krishna’s service? Was this act of austerity selfless, or selfish?

Sometimes while out on travelling sankirtana, living in cramped conditions in transit vans, I would wake up in the morning with a fever and temperature. In order again, to “keep off the bodily platform”, to bathe from a bucket of icy cold water was the order of the day, though Ayur Veda says not to. Despite the fact that those times were very austere, I look back on those days with a sense of worth. They were happy times. Do austerity and happiness go well together?

As we go forward in spiritual life, the differences between renunciation and austerity, sacrifice and charity, and their proper or improper usage, can mean the difference between a soft and a hard heart. If the gopis of Vrndavana are the acme of self-denial in all respects, how far can we go to deny ourselves, within reason, to become cent per cent Krishna conscious? How far up the devotional ladder does our selfishness extend?

It is true to say that so long as we fall short of the goal of Krishna-prema, there must be some selfishness somewhere within us. “…On the other hand, one who desires some material benefit in exchange for devotional service cannot be your pure devotee. Indeed, he is no better than a merchant who wants profit in exchange for service’ (SB 7.10.4)

In the Brhad-Bhagavatamrta, we are taken on a fascinating journey and meet with different devotees, who all seem to think their own position lower than that of other devotees they recommend Sri Narada Muni go and visit. After all, these are all unique cases of being hard on oneself. From the brahmana who gave lavishly in charity, to King Indradyumna, Lord Indra, Lord Brahma and Lord Siva, we come up to the level of karma-misra-bhakti and jnana-misra-bhakti.

Next, we visit Sri Prahlada Maharaja who is described as being in santa-rasa. He mentions his inability to engage in direct service to the Lord, hence his recommendation for Sri Narada to visit Sri Hanuman who is situated in dasya-rasa. Incidentally, Lord Chaitanya would describe this level of devotion as “Very good, very good…” Next, we visit the Pandavas, the Yadus, Sri Uddhava, and then the gopis of Vrndavana.

When Sri Ramananda Raya describes the different levels of devotional attainment to Sri Chaitanya Mahaprabhu, beginning with varnashrama-dharma, to BG 18.66, BG 18.54, the Lord rejected all these saying they were external. Then this verse of Lord Brahma was quoted: “My dear Lord, those devotees who have thrown away the impersonal conception of the Absolute Truth and have therefore abandoned discussing empiric philosophical truths should hear from self-realized devotees about Your holy name, form, pastimes and qualities. They should completely follow the principles of devotional service and remain free from illicit sex, gambling, intoxication, and animal slaughter. Surrendering themselves fully with body, words, and mind, they can live in any ashrama or social status. Indeed, You are conquered by such persons, although You are always unconquerable” (SB 10.14.3).

It is interesting how Srila Prabhupada introduced the four regulative principles in this verse, especially as Lord Brahma begun our Brahma-Madhva-Gaudya sampradaya. Here Lord Chaitanya said of the verse: “It is alright…” From the Lord’s unlimited vantage point, He would see anyone beginning his or her devotional career from this “alright” level as: “You are doing just fine…its alright, keep going now…my dear devotee Srila Prabhupada has set you on the right path…just follow”. Besides, anyone can capture the Lord from this level.

“Sri Chaitanya Mahaprabhu actually accepted this verse (jnane prayasam) as the basic principle of perfection. One has to practice this principle in order to make further progress. When further progress is actually made, one comes to the platform of ecstatic loving service to the Lord” (CC Madhya 8.68 purport).

It is not that Srila Prabhupada set on us an “alright” path. When Sri Ramananda Raya reached up to the spontaneous level of devotion, Lord Chaitanya also said, “It is alright…” When the level of dasya-rasa was described, then Lord Chaitanya said; “Very good, very good, but go further” The lesson we learn is that until we have developed stayi-bhava from santa-rasa onwards, some selfish motives must still be plaguing our hearts.

When we learn of the extreme renunciation of say, the six Goswamis of Vrndavana, theirs was a natural and blissful form of self-denial. It was practical. For instance, let us suppose we are having a terrific japa session and are relishing the chanting, the last thing we want is any interference, like going to the bathroom, or any other impingement. If however we position ourselves stealthily, regulate our habits, and reduce food intake and so on, this voluntary minimisation or tapasya should help to ensure more trouble free japa. It need not be a painful procedure.

On the other hand, if a devotee is not relishing the chanting, and has little or no taste, the chanting can become a laborious, if not unbearable effort, and to follow the four regulative principles on top of that, will make life appear like a tough, austere, and painful survival regime. This is the opposite of happy and joyful self-denial.

If while in the painful mode of living we follow the four regulative principles for fear of going to hell, this is not self-denial, but self-reward. If we put ourselves into a situation that is troubling for us, or inconvenient without good reason, that is also self-reward. “Without such spiritual knowledge, simple detachment from material conditions is but another side of material existence. From the spiritual point of view, it is all external” (CC Madhya 8.64 purport).

Such niyamagrahah behaviour will only cause us to waver in our devotion. We make far more advancement when we willingly perform service for the Lord and His devotees, than to be told to do so. The positive willingness to self-deny in proportion to our spiritual engagement, makes the notion of devotional service being fearful or painful absurd.

Knowing that we have to deny ourselves more and more as we advance, there is one legitimate desire we are allowed to harbour; that is to always remain healthy both physically and mentally. “Life’s desires should never be directed towards sense gratification. One should desire only a healthy life, or self-preservation, since a human being is meant for inquiry about the Absolute Truth. Nothing else should be the goal of one’s works” (SB 1.2.10).

For however long we have been here in this world – anadi – all of our self-centered plans have kept us here as greedy merchants of pleasure. If with a greater pleasure of buying into Lord Chaitanya’s scheme, though it is free, we capture His attention and become like blissful madmen, that too is quite “alright” and even better by His standards.