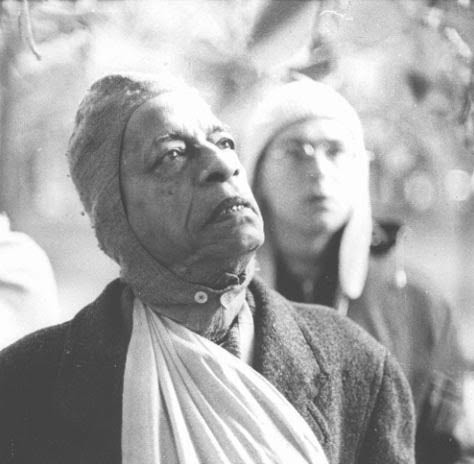 On July 29, 1971, Srila Prabhupada was interviewed on television at the University of Gainesville in Florida (which His Divine Grace described as “a remote corner of the world, thousands of miles from the birthplace of Lord Caitanya”). At one point, Srila Prabhupada was asked the following question:

Interviewer: How would I recognize a true follower of the Krishna consciousness movement by his behavior? What would his traits be? What would his outward expressions be?

Srila Prabhupada: He’d be a very perfect gentleman, that’s all. You could not find any fault in him.

What’s particularly striking about his reply is that Srila Prabhupada never mentioned any external symptoms such as dress, title, social position, or even what religious or spiritual practices one followed. His evidence was the result — or fruit — of spiritual advancement. As Prabhupada often said, “You can judge a thing by its result.”

Earlier in the conversation, Srila Prabhupada informed the interviewer that “We are not concerned with how one man deals with another man.” Rather surprised, the interviewer inquired, “Isn’t that part of your Krishna consciousness movement?” Srila Prabhupada replied, “No, this is not important because we know that as soon as one understands how to deal with God, he will automatically deal very nicely with others.”

In the early 70’s, I remember hearing a conversation where Srila Prabhupada warned the devotees about the dangers of “party spirit.” He said that it could ruin everything. At the time, who could have imagined the possibility of Prabhupada’s movement splitting into various factions? It was inconceivable, but obviously a lot has transpired over the years since then. Who can deny that we haven’t had our ups and downs and that we haven’t made some mistakes along the way? We’ve all gone through changes, but hopefully we’ve matured and gained some wisdom as well. For many of us, our youthful idealism has given way to a more reserved attitude in our views and dealings. There are probably few among us who haven’t spent many sleepless nights trying to figure out how we can actually get it right for Srila Prabhupada. How many times did he instruct us all to get along? But how in the world are we going to do it?

While leafing through a selection of Prabhupada’s letters recently, I came across the following statement:

“Perhaps you know that there are many political parties in a country, but when the country’s total responsibility has to be executed, they become combined. To have some little disagreements amongst yourselves is not very unnatural because we are all individual beings. But as we are all working on behalf of Krishna we should always forget our personal interests and see to the prime cause.”

Here, in a short paragraph, Srila Prabhupada dispels all doubts about how we should interact with one another as aspiring Vaisnavas serving his great mission. It is said that a swan is able to extract the milk (or essence) from a mixture of milk and water. Since Prabhupada is forever the supreme swanlike devotee, his words, books, letters and conversations all contain the very essence of truth. And the truth is always simple, never complicated:

“Although there may be some difficulties within our society, these things are not very important. What is important is that we should simply fix our mind on Krishna’s Lotus Feet. This is His instruction in the Bhagavad-gita. So we associate with one another so that we can assist each other in hearing and chanting about Krishna. That is the purpose of our Society.”

Lord Krishna Himself confirms in the Bhagavad-gita that a wise person (panditah) sees every living being with equal vision (sama-darsinah). He or she makes no distinctions on the basis of bodily identification or designation. Srila Prabhupada said that when making an analogy one should gather together as many similarities as possible to draw a conclusion. Using this logic we can easily understand that we each have so much in common. We’re all eternal spirit souls, part and parcel of the Supreme Lord. In the process of transmigrating from one body to another we have reached the human form of life. In this particular lifetime we have come in contact with Srila Prabhupada, a pure unalloyed devotee of Krishna who is described in the scriptures as the “mercy incarnation of the Lord.” We have each adopted (to one degree or another) the process of reviving our true spiritual nature through the practice of Krishna consciousness as revealed to us by His Divine Grace Srila Prabhupada. These similarities alone far eclipse any temporary differences based on the body or mind. As Prabhupada clearly advised: “To have some little disagreements among yourselves is not very unnatural because we are all individual beings. But as we are working on behalf of Krishna, we should always forget our personal interests and see to the prime cause.”

So ultimately it’s this “prime cause” or higher vision of Krishna consciousness that we are after. Differences are there, most certainly, but they pale in comparison to the wonderful spiritual commonalities that we all share. By focusing on these simple but eternal truths so kindly revealed to us by Srila Prabhupada, we can look forward to further progress in Krishna consciousness both individually and collectively.