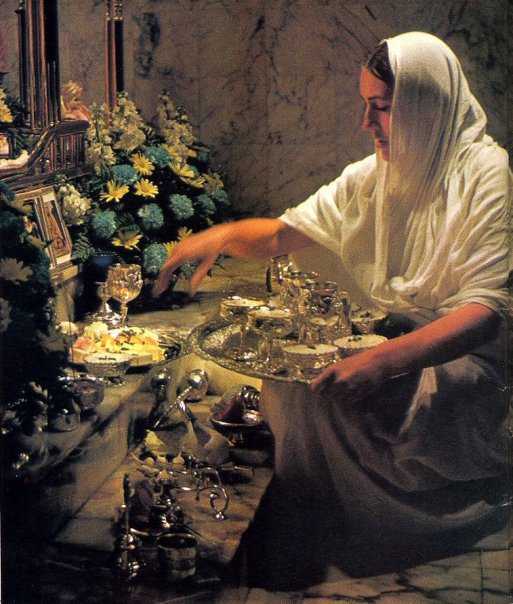 This is her writing from back in the eighties:

This is something I compiled:

Here in Los Angeles we are remembering the unique book distribution of Lavangalatika devi dasi, ACBS, that inspired everyone. She would regularly access areas of the world that no distributor had considered yet. I used to think of her as a secret agent. Now she has accessed the spiritual world. She just recently left us to go to Krishna.

A full-time distributor of the seventies and eighties, Lavangalatika was very devoted to Srila Prabhupada and would go out seven days a week on sankirtana. Although we would see her at managla-artika we rarely saw her for the rest of the day. She did a lot of books, she averaged in the thousands of dollars every week in her collection, and with her proper English accent, she was very personal, with a funny high spirit and bright blue eyes. Her father was an officer in the military during the British occupation of India. She took the support of the temple and the BBT as a personal responsibility.

She distributed Srila Prabhupada’s books at truck stops, ship wharves, on the docked ships, at military bases, Las Vegas casinos, and in the L.A. airport. She brought Russian language books into various foreign countries wherever she could find a Russian population outside of the communist Soviet Union. When the famous “Alaska Pipeline” was being built she would pack books onto the plane and go to Alaska for a month at a time to meet migrant working people there.

Prabhupada told the devotees to recite this sloka as a means of selling the first canto:
“This Bhagavata-purana is as brilliant as the sun and it has arisen in the age of Kali to dissipate the dense darkness of ignorance. Persons who have lost their vision due to the dense darkness shall get help from this Purana.”
So when I went to learn how to do book distribution with her at LAX, I witnessed her sell book after book by reciting that sloka to travelers so impressed by her enthusiasm they naturally took the Bhagavatam.

The following is a distribution story from her godsister, Nartaki, who visited her in her last days:

Nartaki said to Lavangalatika: “You have been our Sankirtan companion and friend in LA for so many years and you were certainly our leader in terms of devotion to our Guru Maharaja and his mission, determination, conviction and great courage. Remember, one time at LAX International Airport you were distributing Bhagavad-Gitas to people in a tour group to go see Disneyland, Universal Studios, Hollywood etc. You gathered them all, gave them each a Bhagavad Gita and told them of the importance of this scripture from India. They were happy, gave a donation and left. After a few minutes they came back, saying their tour guide told them that the book distributors are not authorized to be at LAX. They wanted to give the books back and take the money back. You neither gave the money back nor took the books, but stood up on a bench and gave a loud speech.

‘Dear Ladies and Gentlemen: not only are we fully authorized to be present here today, but also are we giving you a most valuable book called Bhagavad-Gita, a 5000 year old literature about Yoga, Meditation and Self-realization, with wisdom for our modern day to day life. You are very welcome to keep this book and bring it as a gift for your family. Do not listen to the ill advice of others who have selfish motivations. Hare Krishna.’

“You were so convinced and determined that even the Tour guide was stunned and did not dare to retaliate. With a smile on your face you stepped down from the bench, went to the book box, got more books and kept distributing.

“Though Lavangalatika was very ill, she opened her eyes wide and …..I couldn’t believe it…., a little luster came back and she had a mischievous smile on her face. But she didn’t say anything, because she was weak.”

Lavangalatika devi dasi left her body in her small village home in the interior of Maharashtra near Roha. She spent the final twenty-five years of her life keeping a goshala and rescuing cows. Her eco-friendly farm was powered by cow dung methane. She is survived by her devoted husband Prakash and her beloved son, Dwarkadisha, ACBSP.