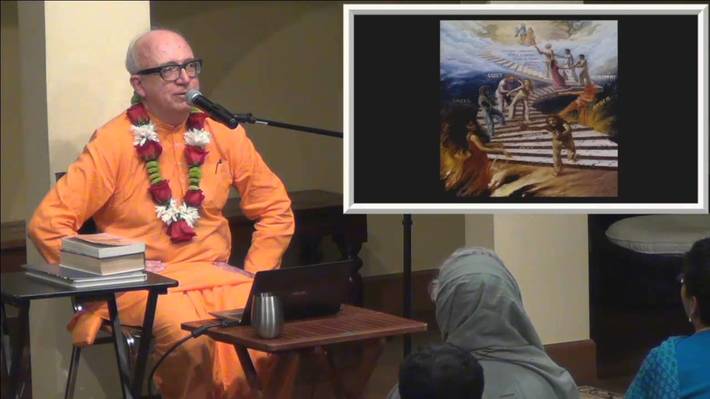 Krishna Kripa Das: [Drutakarma Prabhu read a paper about how to position oneself as a scientist and as a devotee in which he asked a lot of relevant questions. I asked him for the paper, and I insert it here:]

“Science and Krishna Consciousness: Questions on How to Position Oneself”

For anyone seeking to engage with modern science as a devotee of Krishna, specifically as a member of the International Society for Krishna Consciousness, the question of positioning becomes important.

1. What is my actual identity, and how do I position myself publicly in relationship to it?

These preliminary questions on positioning lead to other questions.

2. How does a practitioner of Krishna consciousness interested in science position himself in relation to the traditional system of Vedic epistemology? A brief summary of this epistemology involves three pramanas, or sources of knowledge: pratyaksa (sense perception), anumana (logical inference), and sabda (verbal testimony, specifically, the statements of sastra). Modern secular science is based primarily on pratyaksa and anumana, which are limited and imperfect. The statements of sastra, properly understood, are taken as expressions of truth. I am here giving a basic simple understanding. There are of course many nuances and subtleties. But the point is that a devotee interested in science will have to position himself or herself in relationship to this basic epistemology, especially when it involves apparent contradictions between the provisional conclusions of modern secular science and the statements of sastra.

Here one has to also position oneself in relation to traditional Vaishnava hermeneutical principles for understanding the statements of sastra. The default position is to take the direct, dictionary meaning of the words (the mukhya vrtti) rather than taking secondary meanings or indirect interpretations. Again there are nuances and subtleties, but whatever the case, one will have to define one’s position in relation to these hermeneutical principles.

3. How does a practitioner of Krishna consciousness interested in science position himself or herself in relation to the core texts of the Krishna consciousness movement, such as the Srimad-Bhagavatam? This question is of course related to the epistemological and hermeneutical questions just mentioned. Practitioners of Krishna consciousness generally accept the statements of sastra as evidence, a valid source of knowledge about this world as well as the spiritual world. Modern secular science does not. One approach might be to position oneself as a scientist and, while making no explicit mention of sastra, do research that results in findings that are in fact consistent with sastra, without mentioning sastra. Or one could openly position oneself as an advocate of the Vedic worldview as a source of true knowledge about the observable world, and propose that the findings of scientific research, properly understood, are consistent with the Vedic worldview, which should encourage respect for and faith in the Vedic literature. One way to accomplish this, while respecting the position of secular science that scripture is not evidence, is to propose: “If what the Vedic literature says is true, then we should expect to see X.” And then show we do see X. Another option, which I personally do not favor, is that we adjust our reading of sastra to conform to the current consensus in secular science. My main point is that one has to position oneself in this regard.

4. How does the practitioner of Krishna consciousness interested in science position himself in relationship to Srila Prabhupada and his statements about science? Any member of the International Society for Krishna Consciousness, whether a professional scientist or a devotee interested in science, has to position himself in relation to Srila Prabhupada in this regard. Ideally, this should be done taking into account the full range of Srila Prabhupada’s statements about science and scientists. Some of his statements were more positive, some more negative. It would be incorrect to take the more negative statements as representative of his whole point of view, just as it would be incorrect to take his more positive and conciliatory states as representative of his whole point of view. I believe it is possible to formulate a coherent overall picture. But the main thing is that one will have to position oneself in relation to some realistic depiction of Srila Prabhupada’s views on science. Some of us will be doing this as direct disciples of Srila Prabhupada and others as granddisciples.

5. How does the practitioner of Krishna consciousness interested in science position himself in relationship to the previous acaryas? What do we do in cases where there appears to be some contradiction between the statements made by Srila Prabhupada about science and those made by another acarya? The default position for a member of ISKCON is to defer to Srila Prabhupada. In any case, the point is that one will have to position oneself in this regard. Ideally, the decision will be made based on a truly comprehensive understanding of both the statements of Srila Prabhupada and those of the previous acaryas.

6. How does a member of ISKCON interested in science position himself in relation to other members of ISKCON who have previously made contributions to science and Krishna consciousness? How can previous contributions be fairly evaluated, how can there be building on foundations without blind following or imitation, how can there be respectful correction of mistakes, identification of shortcomings, or expressions of disagreement? Similar questions arise in the positioning of the older contributors in relation to the newer contributors. How can the new contributions be properly evaluated, so that new contributions that may differ from older ones are not rejected just for that reason alone, and not for any actual shortcomings?

7. How does a member of ISKCON seriously interested in science position himself in relationship to the existing science groups and organizations in ISKCON the various Bhaktivedanta Institute branches, other organizations for science and Krishna consciousness? Is one already a member of one of these institutes or groups? If so, how should your group relate to the others? Should there be more unity? Should there be more diversity? Or perhaps one chooses to remain independent of any group.

8. How does a member of ISKCON seriously involved in science position himself in relationship to ISKCON as a whole? This of course will depend on the other positioning decisions one has made. For example, has one positioned oneself as a member of an ISKCON science group? Or is one independent? Whatever the case, the question of the position of science within ISKCON arises. To what extent should efforts related to science be supported by ISKCON, including financially? What priority did science have in Srila Prabhupada’s strategic vision for ISKCON?

9. Getting back to questions related to individual efforts, it seems a member of ISKCON seriously involved in science must ask, “What do I personally want to accomplish? What aspect of the Vedic worldview would I like to see introduced into the world of science? And how exactly am I going to do that? Who will my audience be, and how do I intend to reach that audience?” The question of audience is important. Will my audience be professional secular scientists? Will my audience be devotee scientists? Will my audience be the general public? Or all three. And again one has to consider positioning. Do I position myself as an independent researcher and make all these decisions on my own, or do I consult others or make such decisions collectively as part of a group, or even take direction from someone?

I can give answers to all these questions, recognizing that others may answer them in a different way. But are these the right questions?