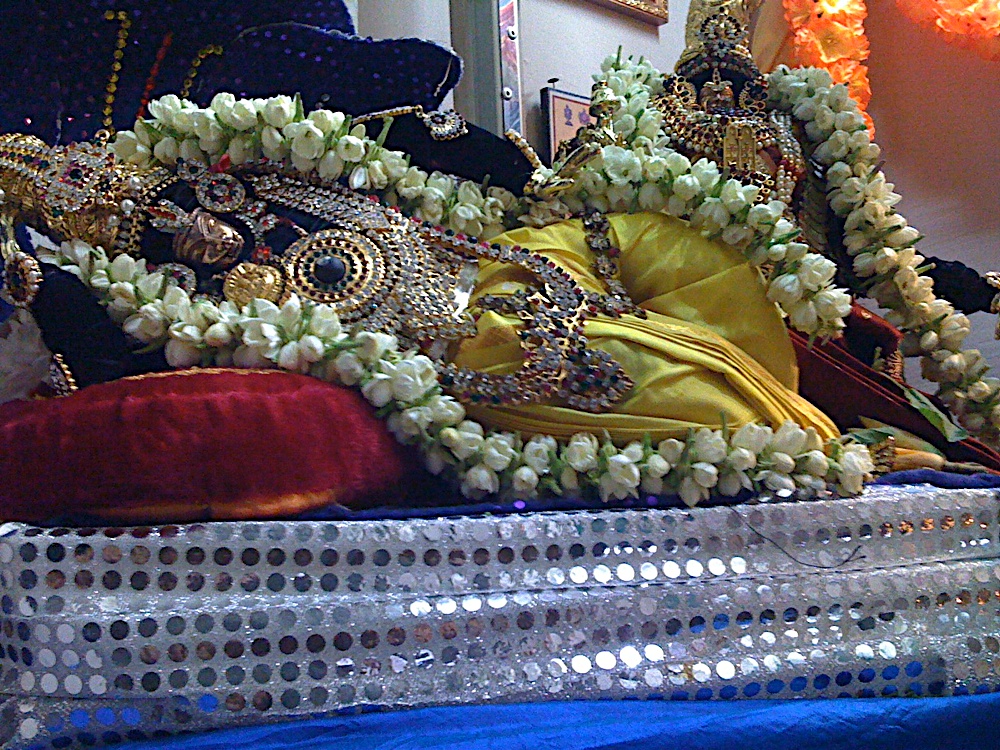 The saintly king Yudhishthira Maharaj said, “Oh Keshava, what is the name of that Ekadasi that occurs during the light fortnight of the month of Ashadha (June – July)? Who is the worshippable Deity for the auspicious day, and what is the process for observing this event?”

Lord Sri Krishna replied, “Oh caretaker of this Earthly planet, I shall gladly tell you a wonderful historical event that the deva lord Brahma once narrated to his son Narad Muni.

“One day Narad Muni asked his father, ‘What is the name of the Ekadasi that comes during the light part of the month of Ashadha’, much as you did? ‘Kindly tell me how I should observe this Ekadasi and thus please the
Supreme Lord, Sri Vishnu.’

“Lord Brahma replied,‘Oh great saintly orator, O best of all sages, Oh purest devotee of Lord Vishnu, your question is as usual excellent for all mankind. There is nothing better than Ekadasi, the day of Lord Sri Hari, in this or any other world. It nullifies even the worst sins if observed properly. For this reason I shall tell you about this Ashadha-shukla Ekadasi.

‘Fasting on this Ekadasi purifies one of all sins and fulfills all ones desires. Therefore, whoever neglects to observe this sacred fast day is a good candidate for entering into hell. Ashadha-shukla Ekadasi is also famous as Padma Ekadasi. Just to please the Supreme Lord Hrishikesha, the master of the senses, one should fast on this day. Listen carefully, Oh Narad, as I relate to you a wonderful historical event that was recorded in the scriptures regarding this Ekadasi. Just hearing this account destroys all kinds of sins, along with all obstacles on the path to spiritual
perfection.

‘Oh son, there was once a saintly king in the Surya Vamsha (Sun dynasty) whose name was Mandhata. Because he always stood up for the truth, he was appointed emperor. He took care of his subjects as though they were his very own family members and children. On account of his piety and great religiosity, there was no pestilence, drought, or disease of any kind in his entire kingdom. All his subjects were not only free of all kinds of isturbances but also were very wealthy. The king’s own treasury was free of any ill-gotten moneys, and thus he ruled happily for many years.

‘Once, however, because of some sin in his kingdom, there was a drought for three years. The subjects found themselves beset by famine also. The lack of food grains made it impossible for them to perform the prescribed
Vedik sacrifices, offer oblations of grita (ghee) to their forefathers and to the devas, engage in any ritualistic worship, or even study the Vedik literatures. Finally, they all came before their beloved king in a great assembly and addressed him thus,‘Oh king, you always see to our welfare, so we humbly beg your assistance now. Everyone and everything in this world needs water. Without water, almost everything is rendered useless or dead. The Vedas call water nara, and because the Supreme Personality of Godhead sleeps upon water, His another name is narayana. God makes His own abode on water and takes His rest there.

It is said that three things cannot exist without water; pearls, human beings, and flour. The essential quality of a pearl is its luster, and that is due to water. The essence of a man is his semen, whose main constituent is water. And without water, flour cannot be made into dough and then be cooked into various forms of bread, offered and eaten. Sometimes water is called jala-narayana, the Supreme Lord in the form of this life sustaining substance – water.

In His form as the clouds, the Supreme Lord is present throughout the sky and pours forth rains, from which grow the grains that maintain every living entity.

“Oh king, the severe drought has caused a great lack of valuable grains; thus we are all miserable, and the population is decreasing as people die off or leave your kingdom. Oh best ruler on Earth, please find some solutions to this problem and bring us to peace and prosperity once again.”

‘The king replied, “You speak the truth, for grains are like Brahman, the Absolute Truth, who lives within grains and thereby sustains all beings. Indeed, it is because of grains that the entire world lives. Now, why is there a terrible drought in our kingdom? The Holy Scriptures discuss this subject very thoroughly. If a king (or head of the country) is irreligious, both he and his subjects suffer. I have meditated upon the cause of our problem for a long time, but after searching my past and present character I can honestly say that I find no sin.

Still, for the good of all your subjects, I shall try to remedy the situation.” Thinking in this way, King Mandhata assembled his army and entourage. Paid his obeisances to me, and then entered the forest. He wandered here and there, seeking great sages in their Ashrams and inquiring about how to resolve the crisis in his kingdom. At last he came upon the ashram of one of my other sons, Angira Muni, whose effulgence lit up all directions. Seated in his hermitage, Angira looked like a second Brahma. King Mandhata was very pleased to see that exalted sages, whose senses were completely under control.

‘The king immediately dismounted his horse and offered his respectful obeisances at the lotus feet of Angira Muni. Then the king joined his palms and prayed for the Muni’s blessings. That saintly person reciprocated by blessing the king with sacred mantras; then he asked him about the welfare of the seven limbs of his kingdom. The seven limbs of a king’s domain are the king himself; the ministers; his treasury; his military forces; his allies; the brahmins; the sacrificial performances performed in the kingdom and the needs of the subjects under his care.

‘After telling the sage how the seven limbs of his kingdom were situated, King Mandhata asked the sage about his own situation, and if he was happy. Then Angira Muni asked the king why he had undertaken such a difficult journey into the forest, and the king told him of the affliction his kingdom was suffering. The king said, “Oh great sage, I am ruling and maintaining my kingdom while following the Vedik injunctions, and thus I do not know the reason for the drought. To solve this mystery, I have approached you for help. Please help me relieve the suffering of my subjects.”

‘Angira Rishi said tot he king, ‘The present age, Satya yuga, is the best of all ages, for in this age Dharma stands on all four legs (Truthfulness, Austerity, Mercy, and Cleanliness). In this age everyone respects Brahmins as the topmost members of society. Also, everyone fulfills his occupational duties, and only twice-born Brahmins are allowed to perform Vedik austerities and penances. Although this is a standard, Oh lion among kings, there is one shudra (uninitiated, untrained person) who is thus unlawfully performing the rites of austerity and penance in your kingdom. This is why there is no rain in your land. You should therefore punish this labourer with death, for by so doing you will remove the contamination inflicted by his actions and restore peace to your subjects.”

‘The king then replied, “How can I kill an offense less performer of austerity and sacrifice? Please give me some spiritual solution.”

‘The great sage Angira Muni then said, “Oh king, you should observe a fast on the Ekadasi that occurs during the light fortnight of the month of Ashadha. This auspicious day is named Padma Ekadasi, and by its influence plentiful rains and thus grains and other foodstuffs will surely return to your kingdom. This Ekadasi bestows perfection upon its faithful observers, removes all kinds of bad elements, and destroys all obstacles on the path to perfection. Oh king, you, your relatives, and your subjects should all observe this sacred Ekadasi fast. Then everything in your kingdom will undoubtedly return to normal.”

‘Upon hearing these words, the king offered his obeisances and then returned to his palace.When the Padma Ekadasi arrived, King Mandhata assembled all the Brahmins, Kshatriyas, Vaishyas and shudras in his kingdom and instructed them to strictly observe this important fast day. After they had observed it, the rains fell, just as the sage had predicted, and in due course of time there were abundant crops and a rich harvest of grain. By the mercy  of the Supreme Lord Hrishikesha, the master of the senses, all the subjects of King Mandhata became extremely happy and prosperous.

‘Therefore, Oh Narada, everyone should observe this Ekadasi fast very strictly, for it bestows all kinds of happiness, as well as ultimate liberation, upon the faithful devotee’

Lord Sri Krishna concluded, “My dear Yudhishthira, Padma Ekadasi is so powerful that one who simply reads or hears its glories becomes completely sinless. Oh Pandava, one who wishes to please Me should strictly observe this Ekadasi, which is also known as Deva-sayani Ekadasi

Deva-sayani, or Vishnu-sayani, indicates the day when Lord Vishnu goes to sleep with all the devas (demigods). It is said that after this day one should not perform any new auspicious ceremonies until Devotthani Ekadasi (Haribodhini (Probodhini) Devotthaani (Uttana) Ekadasi), which occurs during the month of KArtika (October – November), because the devas (demigods), being asleep, cannot be invited to the sacrificial arena and because the Sun is travelling along its Southern course (Dakshinayanam).

“Lord Sri Krishna continued, “Oh lion among kings, Yudhishthira Maharaj, whoever wants liberation should regularly observe a fast on this Ekadasi which is also the day when the Chaturmasya fast begins.”

Thus ends the narration of the glories of the Ashadha-shukla Ekadasi – also known as Padma Ekadasi or Deva-sayani Ekadasi – from the Bhavishya- uttara Purana.