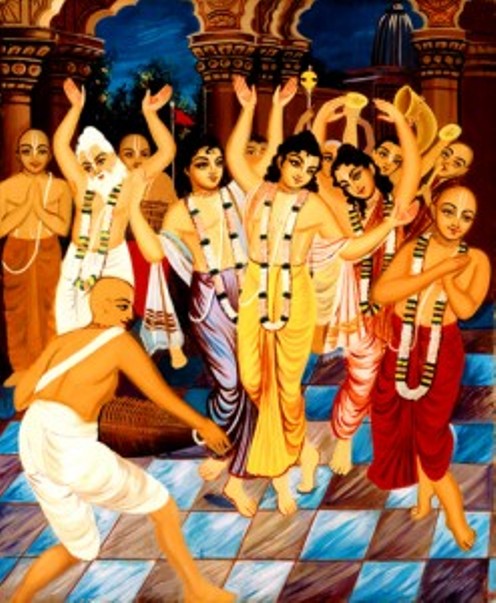 “When I heard the question [how to keep the mind from wandering during kirtana], different phrases came to mind. One was: ‘Hear the wonderful chorus and let it uplift you.’ That chorus is a dimension in kirtana that is not available to us in japa. When we are chanting among sincere devotees, we can feel the upliftment. There is such an inspiring (and demanding) welling up of voices and we can ride that wave of sound.

“Another phrase that comes to mind is, ‘Go with the emotions.’ When we chanted with Srila Prabhupada on the Lower East Side, we certainly went with our emotions and Prabhupada encouraged that. If we feel transcendental emotions in the kirtana, we can acknowledge them and allow them. We shouldn’t just struggle to fix our minds on some Krishna conscious concept. Kirtana is not an intellectual exercise.

“It also occurred to me that if we are struggling to control our minds during kirtana, then we should pray to simply stay in the kirtana and bathe in its soothing waters. Kirtana will wash us clean of everything that is hindering our attention if we remain in the holy name’s presence.

“Kirtana is a good time to pray. We tend to be more Krishna conscious during kirtana and more clear in our thinking. During kirtana we can pray to remain in devotional service throughout our lives. Lead and chorus, lead and chorus—they are like waves in the ocean. If we miss one wave, we can always dive into the next one.

“I especially feel that way during Prabhupada’s kirtana. No one sings like Prabhupada. Listening to Prabhupada sing kirtana gives me a taste of the meaning of the Hare Krishna movement. This is a chanting movement. Therefore, Prabhupada introduced the chanting at the very beginning and sang Hare Krishna everywhere he went. When he was no longer able to sing loudly, he would sit among the devotees and hear kirtana. He took spiritual pleasure in the chanting. Even near the end when he went back to Vrindavan, he wanted to be surrounded by soft kirtana twenty-four hours a day.

“The Krishna consciousness movement won’t really be successful until we spread the holy name. Sometimes it seems impossible, but it is the only way to create a Krishna conscious world. And where does this prophecy begin its fulfillment? It has to take place within the movement itself. Prabhupada wanted kirtanas in all the temples. He knew that if anyone came to a temple and heard the kirtana, it would draw him in. Kirtana is beyond sectarian designations. There is spiritual power in the devotees chanting together.

“When a neophyte devotee chants, he notices that he doesn’t have devotion for Krishna. Still the chanting keeps us within the kirtana-rasa. Other things seem unimportant in comparison. It seems that as soon as we leave the kirtana, those other concerns flood our minds, so we should keep having kirtana as much as possible. Bhaktivinoda Thakura advises us, “Just once relish the nectar of the holy name!” We are already engaging our physical senses in the chanting, mantra after mantra. Now please just once, mind, relish the chanting. “Whether you are a householder or a sannyasi, constantly chant…Do not forget this chanting, whether you are in a happy condition or a distressful one. Just fill your lips with harinama.”

“When I remember early kirtanas with Prabhupada, I remember how raw we all were. But Prabhupada transformed us. It was magical. We gave ourselves to the kirtana expecting to get ecstasy from it and we did feel ecstasy.

“I don’t like to say that kirtanas were necessarily better then, but we were different. We were naive, unselfconscious, unsophisticated. If we felt some emotion, we weren’t afraid to express it in front of the other devotees or guests. We weren’t afraid of appearing like sahajiyas. Therefore, we danced and chanted with exuberance.

“Prabhupada was so permissive in those days. He preached to us about the power of the holy name and he expected us to surrender. Because he had explained to us what to expect from full surrender, we put our hearts into the chanting. The movement was undeveloped in those days, so the only real way we had to surrender was in our chanting.”

Tags: on kirtana
E-mail me when people leave their comments –
Follow