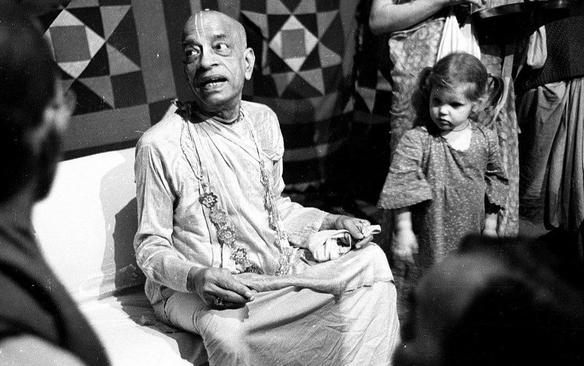 Be Very Careful, If one does not chant Hare Krishna, Sarasvati ”Maharaj” may give you a ”Slap”, and ”Sarasvati, is preaching, “Do you know Krsna?”………..
Prabhupada: This girl, Sarasvati… Some boy said, “Oh, why you are chanting? This is not very good.” She gave[him] a slap. Just see. Naisthiki. How firmly she is fixed up, although she is a small child. Bhaktir bhavati naisthiki. Nobody can deviate [her]. A pure devotee of Krsna cannot be deviated. You cannot cheat him. No. He’ll give you a slap. bhavati naisthiki.
>>> Ref. VedaBase => Srimad-Bhagavatam 1.2.18 — October 29, 1972, Vrndavana
Prabhupada: We have seen your note regarding Sarasvati Maharaja, and you may engage one Sanskrit teacher for Sarasvati so she shall become a very great scholar, just like Jiva Goswami was trained in Sanskrit language from early childhood and no one could surpass him in all of India.
>>> Ref. VedaBase => Letter to: Bhavananda — London 1 August, 1972
Prabhupada: I have given her the name leader __ very happy when she’s called leader. Our Purusottama das brahmacari was criticizing me for having little attachment with Sarasvati, and for that offense he had to leave the Society.
>>> Ref. VedaBase => Letter to: Gargamuni — Tokyo 26 April, 1972
Prabhupada: Here, the daughter of Malati, Sarasvati, is giving us much pleasure in her Krishna Consciousness activities. She is so nice that as soon as there is chanting sound of kirtana immediately she begins to dance and clap. Even the audience becomes astonished and they follow her activities. It is very nice.
>>> Ref. VedaBase => Letter to: Balai — London 15 November, 1969
Prabhupada: Just like that child, Sarasvati, is preaching, “Do you know Krsna?” He says, “No.” “He is the Supreme Personality of Godhead.” Simply say like that, “He is the Supreme Personality of Godhead,” and “Chant His holy name, Hare Krsna.” If you do this, then you are preacher; you are spiritual master. It is so nice.
>>> Ref. VedaBase => Srimad-Bhagavatam 1.8.23 – October 3, 1974, Mayapur
Prabhupada: The Syamasundara’s daughter, Sarasvati, she is wonderful girl. She is a child, but she never goes outside the spiritual consciousness. She makes her arati.
>>> Ref. VedaBase => Town Hall Lecture – April 14, 1972, Auckland
Prabhupada: We have got a little girl, perhaps you have all seen, Sarasvaté. She was admitted in a school in Bombay. And because there was no Hare Krsna chanting, she began to cry, “No, I shall not be in this school.” Practical. There was [indistinct], she was organizing all the children to chant Hare Krsna. But they began something else, so she said, “No, I am not going to this school. This child must be executing devotional service in her past life.
>>> Ref. VedaBase => Pandal Lecture – November 19, 1971, Delhi