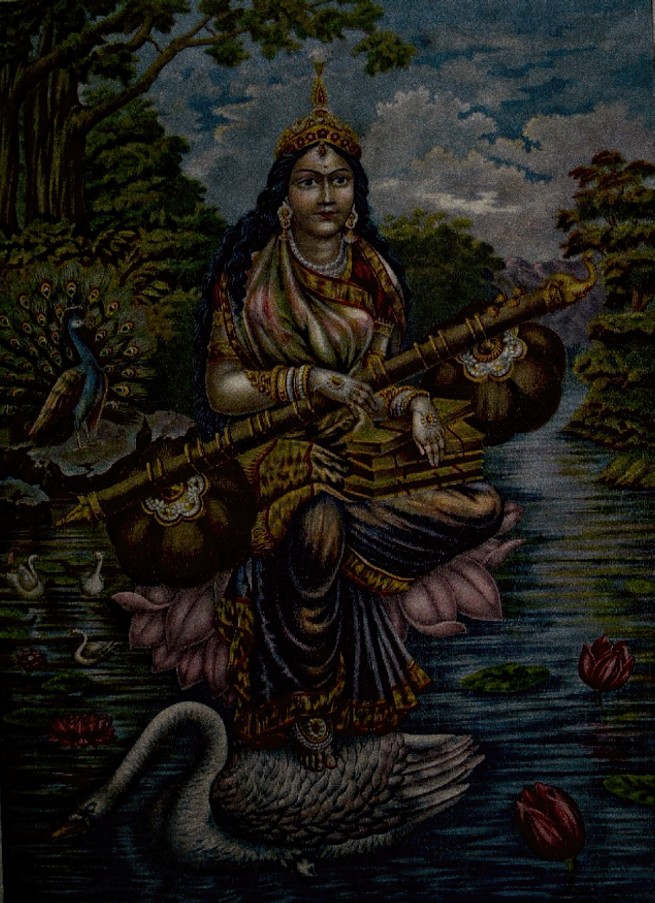 In 1786 Sir William Jones, a Welsh philologist and judge of the supreme court of Bengal, sent shock waves throughout Europe with the following speech he gave in his address to the Asiatic society of Bengal.

“The Sanskrit language, whatever be its antiquity, is of a wonderful structure; more perfect than the Greek, more copious than Latin, and more exquisitely refined than either, yet bearing to both a stronger affinity, both in the roots of verbs and the forms of grammar, than could possibly have been produced by accident; so strong indeed, that no philologer could examine them all three, without believing them to have sprung from some common source, which, perhaps, no longer exists ”.

The Sanskrit language contains some 2012 dhatus, which are word roots, these create the numerous dhatu rupas, which are word formations, which make up the Sanskrit language. Sanskrit can be likened to a lego set which contains some 2012 building blocks, from which one can create innumerable formations. The shock waves which rippled throughout Christian Europe with the discovery of Sanskrit, was the realisation that these dhatus, these Sanskrit word roots were riddled throughout the European languages.

In Germany they quickly recognised the significance of Sanskrit to such a degree it was declared “Germany had become a nation of Sanskrit scholars”. Frederich von Schlegel the German philosopher wrote ” There is no language in the world, even Greek which has the clarity and philosophical precision of Sanskrit. India is not only at the origin of everything, intellectually, religiously and politically, even the Greek heritage seems to pale in significance”.

Dyu is a Sanskrit dhatu, a Sanskrit root which means “Heaven” “Sky” “Glow” “Brightness”. From “Dyu” we get the Sanskrit “Dyut” which means “Illuminate” “Shining” “Splendour”. The European scholars such as Sir William Jones, Max Muller, Sir Monier Williams, they could all see that this “Dyu” was the source of the Latin “Deus” meaning “God”. It was also apparant that the Roman God “Jupiter” which means “father of the Gods” was simply the Sanskrit “Dyu pita” meaning “father in heaven”. And not only that it was easy to see that this “Dyu” from which we get the Latin “Deus” and subsequently “Jupiter” was also the source of the Greek God “Zeus” who is non different than the Roman God “Jupiter”.

The young Max Muller, the scholar of Oxford whose Boden chair was created to destroy India, was a different animal than the old Max Muller, secure in his position and mature in his knowledge of languages. In his book “India, what it can teach us” published in 1882 at the mature age of 59 he wrote the following.

So which came first, the Sanskrit or the Latin, the Pra or the Pro. I will leave it to the experts to explain the Latin “Pro” however in Sanskrit each consonant and vowel has inherant meaning and significance. The Sanskrit “Pra” ends with the Sanskrit vowel “A”. In the Bhagavad Gita Krsna declares.

” Of letters I am the letter A, and among compounds I am the dual word. I am also inexhaustable time, and of creators I am Brahma, whose manifold faces turn everywhere.” Gita 10.33

“It was in India, however, that there rose a body of knowledge which was destined to revolutionize European ideas about language. Panini Grammar taught Europeans to analyze speech forms, when one compared the constituent parts, the resemblances, which hitherto had been vaguely recognized, they could be set forth with certainty and precision.” Renowned American linguist Leonard Bloomfield.

Sanskrit is not the result of some vague, foggy, misty, evolutionary red in tooth and claw struggle for survival. Its the natural expression of higher beings, it is non different from the Vedic scriptures themselves, they are like fire and heat or water and liquidity, they are inseperable in both their origin and purpose. An example of this is the Sanskrit Dhatu “Pu” which means “to cleanse” “to purify” “to purge”. From this Sanskrit dhatu we get the dhatu rupas, the word forms of “Punati” which means “to purify” and “Puta” which means “to cleanse”.

We also get the Sanskrit “Putra” meaning “Son” which is formed by two dhatus “Pu” meaning “Pure” and “Tra” meaning “to rescue” “to save” and “to protect”. In the Vedas a son performs purificatory rites which “Protects” the “Purity” of his parents who have left this world or by performing purificatory rites he can “Rescue” or “Save” his parents from hellish conditions. Another word is “Puja” which is once again the Sanskrit root “Pu” meaning “purify” and the Sanskrit “Ja” which means “to go towards” “to advance”. The meaning of Puja is to advance towards purification. Puja also means an offering, worshipping, but it also means a purifying religious rite, so in this way we can see how intimate these Sanskrit dhatus are to the Sanskrit language and how integrated the Sanskrit language is to the Vedic scriptures whose purpose is one of purification, and to suggest this language has any source other than the Vedas themselves is simply ignorance.

In Europe this Sanskrit “Pu” is once again seen in the Latin root “Pur” which means “Pure” and which is the root of many European words such as “Pure” “Purgatory” “Puritanical” “Purpose” “Purport” “Purchase” and many more which all stem from this Latin “Pur” which the scholars of Europe could see was intimately connected to this Sanskrit “Pu” meaning “Pure”.

” I propose to write about the literature of different nations and different centuries. I wish to show that this literature is not many, but one. That the same leading ideas have arisen at epochs apparently far separated from each other, that each nation however isolated it may seem, is, in reality, a link in the great chain of development of the human mind. In other words, to show the unity and continuity’ of literature. This has only been possible within a few years. To the despairing school-boy of fifty years ago the histories of Phoenicians, Carthaginians, Romans, or Greeks, were so many detached pieces of information to be fixed in the memory by dreary plodding. But the moment the mind realizes the mighty truth that one nation is connected with all others, its history becomes delightful and inspiring, because we trace its method of reproducing the ideas we had met elsewhere. And it is to the Sanskrit language that we owe this entire change in our standpoint.” “Sanskrit and its kindred literatures Studies in comparative mythology” Laura Elizabeth Poor.

As well as “Jnana” meaning “Knowledge” we also have the Sanskrit “Veda” meaning the same. The Vedas are a vast body of knowledge handed down from lofty spheres. The root of the word Veda is “Vid” which means “to know” “to perceive” “to understand”. From “Vid” we get the Sanskrit “Vidura” meaning “Wise” we get “Vidya” meaning “Science” and we get “Vedanta” meaning “the end of all knowledge”.

In Latin we have “Videre” which means “to see” from which we get the word “Video” meaning “i see”. From this Sanskrit “Vid” meaning “to know” “to perceive” we also get the Latin words “E-vid-ent” “Vision” and “Visitor”. In Greek they either drop the “V” or they replace it with an “E” and so we have the Greek “Eido” meaning “to know” and “Idman” meaning the same.

“The grammar of Panini stands supreme among the grammars of the world, alike for its precision of statement, and for its thorough analysis of the roots of the language and of the formative principles of words. By employing an algebraic terminology it attains a sharp succinctness unrivalled in brevity, but at times enigmatical. It arranges, in logical harmony, the whole phenomena which the Sanskrit language presents, and stands forth as one of the most splendid achievements of human invention and industry. So elaborate is the structure, that doubts have arisen whether its complex rules of formation and phonetic change, its polysyllabic derivatives, its ten conjugations with their multiform aorists and long array of tenses, could ever have been the spoken language of a people.” The Indian Empire – By Sir William Wilson Hunter