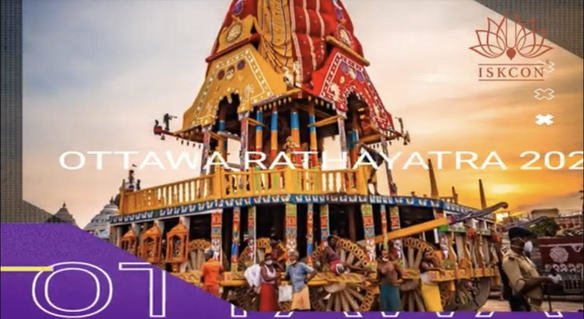 This is the first year of a Chariot Fest, on more of a grand scale, in Canada’s Nation Capital. The chariot, so well constructed and conserved by competent craftsman from Montreal, Abhuy Charan, came in on the scene in this residential student area of Ottawa University. The route of the procession also took us along the Rideau River, where you have many embassies situated from around the world.

Starting from Templeton Street, the chariot and its people-power procession made its way in a counter clockwise fashion to the end of Sandy Hill community Park. The annual and iconic Ratha Yatra also takes place near the sandy district of the Bay of Bengal, in Puri, India.

Several hundred devotees participated in this charming and wholesome chanting session. Drums, symbols and tambourines dominated the student zone of the city. The truck, elaborately painted, was my location for leading the chant. The vehicle was used as a source of sacred sound throughout and it was the technique that more or less worked at the chariot fest earlier in the summer, in Saskatoon.

My other area of participation was on the stage, or rather on the shaded grass, for laughter-yoga, dance-yoga and chant-yoga. It was the last item on the agenda for the day.

I would like to thank the leader of the Krishna community in Ottawa, Krishna Dulal, for an excellent job executed.