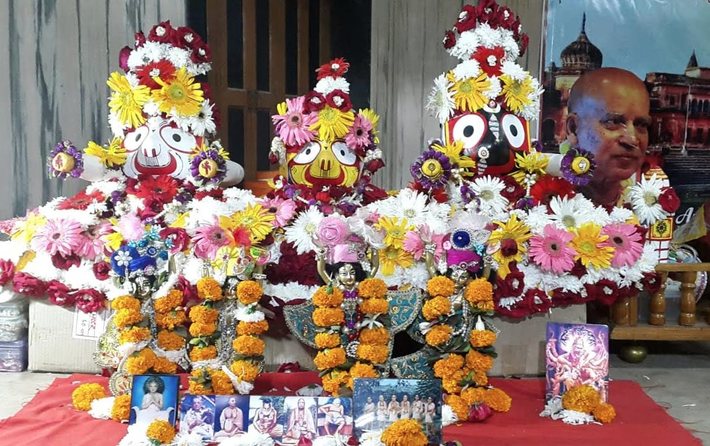 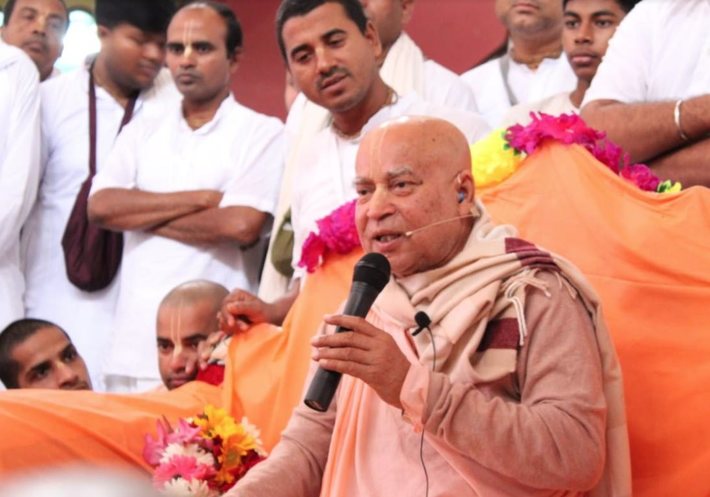 Sadhu Sanga 2019 with His Holiness Subhag Swami Maharaj was organised in Ayodhya Dham from 26th September to 1st October 2019. This Sadhu sanga event is organised every year at one of Lord’s pastime places with the purpose for the disciples and well wishers of His Holiness to come together to listen to and associate with their spiritual master and amongst themselves.

Devotee association is a very important aspect of devotional life. Devotees eagerly wait for the Sadhu Sanga program because it gives them a chance to associate with their guru Maharaj and clear all the doubts hindering their spiritual lives, it gives them a chance to listen to lots of Hari Katha from Maharaj and also from other senior God brothers, a chance to enjoy with lots of sankirtana and lots of dancing, a chance to serve other devotees and strengthen loving relations with their god brothers and god sisters and a chance to enhance Krishna Consciousness by visiting a new Lord Krishna’s pastime place.

As Maharaj tells, Sadhu Sanga provides a nice platform for him to check the spiritual standing of all of his disciples whom he cannot meet other time of the year.

Srila Prabhupada says,” So here Prahlāda Mahārāja, he recommends that first of all you have to engage yourself under the guidance, under the service, of a bona fide spiritual master, and then you have to keep yourself in association of the devotees” SP lec. on SB 7.7.29-31, March 15, 1967, San Francisco.

Ayodhya dham is situated in a divine realm. Ayodhya Dham is full with numerous temples of Lord Ramchandra, mother Sita, Lakshman and Hanuman. Lord Ram stays in Ayodhya as Raja Ram, meaning in the mood as the king of Ayodhya. One of the most attractive temple in Ayodhya is the Kanak Bhawan. Kanak bhavan’s history dates back to Treta Yug when it was a palace gifted by Ram’s step-mother Kaikeyi to him and his consort Sita as a marriage gift. Later the palace was reconstructed as a temple many times by various kings. Another temple is Hanuman Garhi.This temple is in the shape of a fort, on top of a hill and is right at the centre of Ayodhya. Legend has it that Hanuman lived here in a cave and guarded the Janambhoomi or Ramkot. Many Shaligram shilas are also worshipped here.

Ayodhya is beautified by the river Sarayu which is associated with various pastimes of Lord Ramchandra. River Sarayu borders Ayodhya to one side and is like a golden bracelet of Ayodhya Dham. Continuous chanting of ‘SitaRam’ in the temples fabricate a divine atmosphere in the deeply adored Ayodhya Dham. The innumerable monkeys and the cows lived very peacefully with the people unlike other places. H. H. Subhag Swami maharaj likes Ayodhya very much. He says that whenever he visits Ayodhya he remembers Vrindavan of early days.

The devotees eagerly waited for the Ayodhya Sadhu Sanga. Ayodhya, as a venue for the Sadhu Sanga 2018 was cancelled because of uncertainty of prevailing security conditions, but this year after staying in Ayodhya, we found everything to be completely peaceful. The people were very gentle, they were all devotees of Lord Ramchandra.

On one of the days in the festival, the devotees went to have darshan of Kanak bihari Lord Ram and Sita in Kanak Bhavan, to the Dashrath Mahal and to Hanuman garhi. Another afternoon, the devotees enjoyed taking bath in Sarayu river, just at a walking distance from the Dharamsala where the devotees stayed.

The drama performed everyday added a special flavour to the program. Each evening, after the estatic and rapturous Sandhya arti kirtan, the devotees of the drama team performed an enthralling drama from Ramayana. The charmed audience was fascinated and enjoyed few lighter moments in association of other devotees and with their spiritual master.

Management of a grand program in a new place is always a challenging task. Devotees had started to arrive on 25th September. Around 350 devotees registered and participated in the Sadhu sanga festival. The program hall was decorated with flower bouquets and banners of Prabhupada quotes. Everyday matajis offered the dieties fresh flower garlands and beautified the venue with colourful rangolis.

On the very first day of the festival, just after the Mangal arti, His Holiness Subhag Swami Maharaj personally taught the devotees ways to chant quality rounds. Maharaj always gives stress on early morning japa. He started to ask the devotees individually the number of rounds chanted by that time. This greatly encouraged the devotees to chant early in the morning.

Many other seminars were arranged for the day. Each day brahmacharis had brahmachari classes, grhasthas had their separate classes. An informative seminar was presented on Mayapur gurukula. Maharaj always encourage the grhasta’s to send their children to Mayapur gurukula. All the programs were overseen by Maharaj personally. He delivered the morning Bhagvatam classes himself. Maharaj stressed on the importance of following the instructions of a pure devotee and told that the key to success in spiritual life lies in their satisfaction. He gave the example of Narada muni who got blessings of sages in his previous life. He asked the brahmacharis to keep upto the brahmachari standards. Real devotion comes from the heart, just like the way Shabri served Lord Ram, Vidura and his wife served Lord Krishna when Lord came to Mathura, the way Panch Pandava and Draupadi loved Lord Krishna.

Final day saw a concluding and thanksgiving ceremony. The organisers first of all thanked His Holiness Subhag Swami maharaj for his love and care. He was present during the complete five day festival. Maharaj ji spent all of his time to give association to the devotees. He was visiting the prasadam hall and affectionately served prasadam each time. He sat amongst the devotees so that everyone was able to approach him. Rest of the time he was busy meeting personally with the devotees and solving their problems. The devotees felt very much obliged.

Many devotees had served tirelessly for arranging the festival. The devotees involved in various other services were thanked with a garland and a frame of Janki Vallabh Lord Ramchandra and Sita Devi with lots of blessings from the hands of Maharaj.

Some devotees came up to the stage to share their realisations. They were very happy to attend the Sadhu sanga festival 2019. They will highly cherish the feelings and rememberings they experienced in Ayodhya dham and eagerly wait for the Sadhu sanga next year.

All glories to Srila Prabhupada!!! 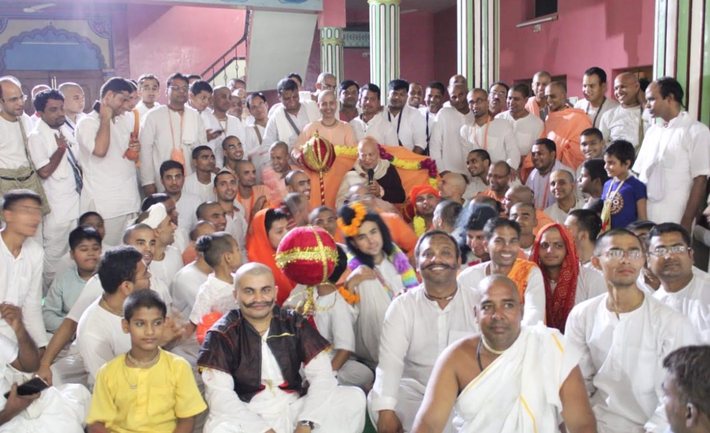