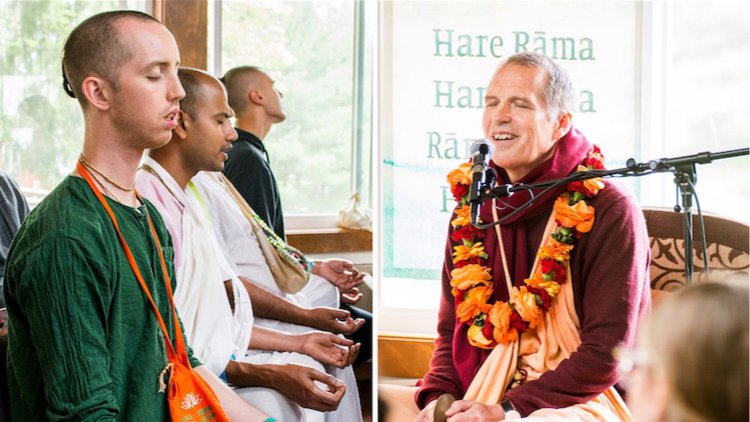 Two hundred devotees from all over the U.S. are expected to attend “The Living Name Retreat Part 3: The Science of Achieving Full Absorption in the Holy Names of Krishna” from April 9th to 12th in New Vrindaban, West Virginia, and spots are filling up fast.

The retreat will be the only chance to see facilitator and ISKCON guru Sacinandana Swami in North America this year, as he will be canceling all other U.S. engagements, including Sadhu Sanga, to focus on projects in Germany.

The Living Name Retreat is a unique experience focused on reigniting one’s relationship with the Holy Name. “We can be chanting ‘broken names,’ or inattentive japa for years, but if we come to Maharaja’s retreat with an open mind and heart, he can help us access why we chant,” says Rukmini Priya Poddar, a gurukuli who has attended several retreats. “He reminds us that the Holy Name is a person, and that we can invest in our relationship by going through a systematic process.”

The New Vrindaban Easter Weekend event is an opportunity to benefit from Sacinandana Swami’s decades of insight into the Holy Name, and to experience a worldwide phenomenon that has deeply affected many lives since its inception.

It all began twenty-five years ago, when Maharaja spent the whole month of Kartik in seclusion in Vrindavan, India, chanting japa from sunrise to sunset. He has done the same every year since, bringing the inspiration he derives to his retreats. 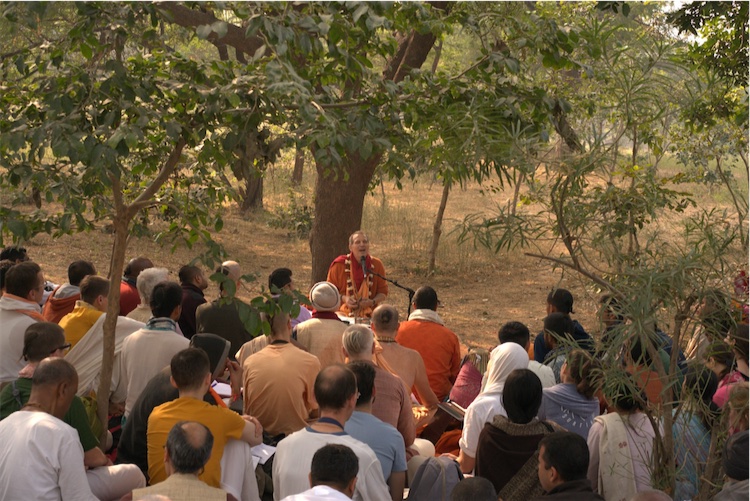 In 2006, he held the first Japa Retreat in a chaleigh in Switzerland, guiding just a handful of devotees in chanting sixty-four rounds a day. Realizing that not everyone could do this, he began to develop courses and offered them on Croatian islands in the Adriatic Sea. These became so popular that devotees began inviting him all over the world, and the bug spread.

In 2011, Sacinandana Swami added kirtan to his retreats, and changed the name to “Holy Name Retreats”; he changed it again in 2018 to “The Living Name,” upon the release of his similarly-titled book. Today, he holds three to four retreats per year – one in Russia, near Moscow, which draws 500 to 600 people; one in Europe in places like Radhadesh, Belgium; one in North America, often in New Vrindaban; and one in Vrindavan, India at Govardhan.

“The Govardhan retreat is quite powerful,” says Rukmini. “It’s a full six days, and includes a sixty-four round day at Ter Kadamba, a 12-hour kirtan near Govinda Kund, and seminars on the Holy Name right by the hillside of Govardhan. So you feel like you’re embraced by Braj, taking shelter of the Dhama.”

April’s Living Name Retreat might be the closest experience to this one can get, held in New Vrindaban, of which Srila Prabhupada stated during a 1972 visit, “This Vrindaban, that Vrindavan, no difference.” The venue, a beautiful yogashala, features three walls of panoramic windows overlooking New Vrindaban’s own Kusum Sarovara lake, and surrounded by cows, peacocks, peaceful trails, and many other replicas of Vrindavan’s sacred pilgrimage spots. 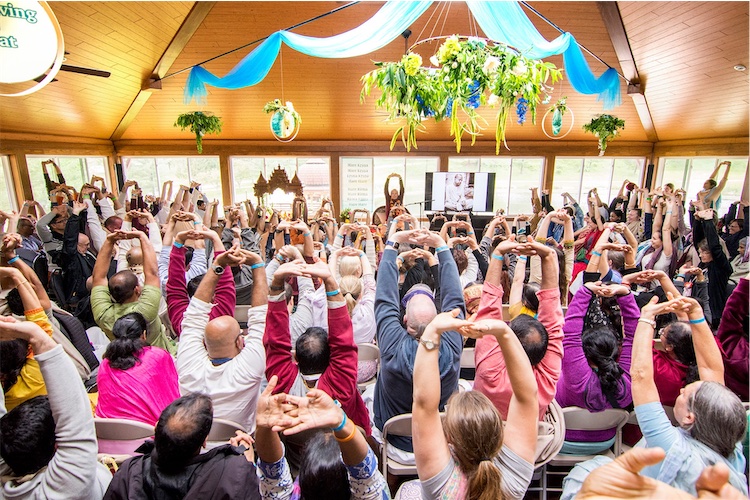 The event will begin on Thursday evening from 6 to 9pm with “Entering the Retreat,” during which Sacinandana Swami will tune people in with an intention-setting lecture and kirtan.

Every morning during the retreat, there will be a full morning program, including options to take yoga classes, attend go-puja and milk the cows.

In place of the usual morning lecture, Sacinandana Swami will give a Discovery Class, exploring themes from his book like “The Divine Reciprocation,” “The One and Only Necessity,” and “The Essence: Surrender Unto Me – Krishna.” These will be followed at 11am by workshops like “Attaining the Qualifications to Chant” and “Chanting with Devotional Feelings.”

“The whole idea is that in the morning sessions, we talk about different ways we can connect with the Holy Name,” says Rukmini. “Then in the workshops, we put what we’ve learned into practice with chanting, exercises, guided meditations and partner discussions.”

In the afternoons, there will be an option to chant japa with Sacinandana Swami and receive his guidance; followed by dinner and then Lila Kirtan. This immersive experience begins with bhajans, over which Maharaja narrates a pastime of the Lord, before a seamless transition into a drama depicting it. 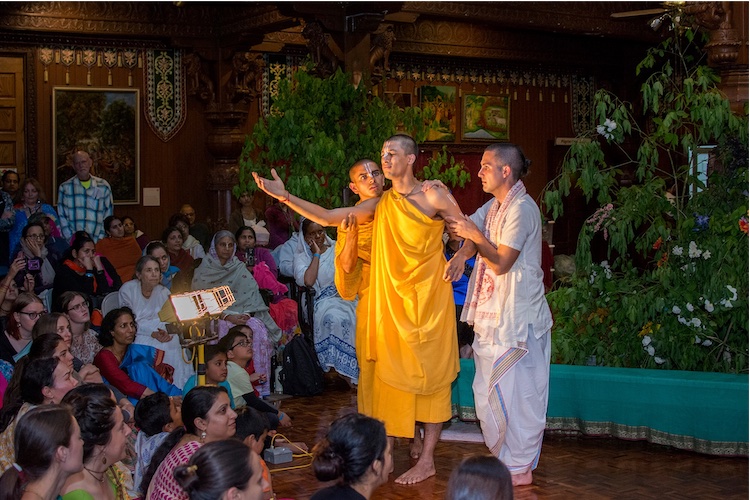 “You’re seeing Lord Krishna’s Vrindavan pastimes in front of you, which helps you become attracted to Krishna as a person, and to develop a relationship with Him,” says Rukmini. “Last year, at the end of every performance, people were extremely touched. They were saying things like, ‘I think I’m going to dream of Krishna tonight,’ or ‘It was so sweet seeing the way He danced with the cowherd boys.’ It’s such a nice way to end every evening, because then the next day when you start chanting, you’re thinking about those pastimes.”

The weekend will end with a “Taking the Retreat Home” workshop on Sunday, followed by an sumptuous lunch feast at 1:30pm.

According to previous attendees, every step up to and including this point of the retreat shows incredible attention to detail.

This year as with last year, the New Vrindaban team will accommodate guests in the Palace Lodge, cabins, and temple guest wing with its beautifully remodeled rooms. Three delicious healthy meals will be provided daily, made with vegetables from Eco-Vrindaban’s new hightunnel garden and dairy from protected cows. There will also be an hour-for-hour children’s camp, so that parents can fully absorb themselves in the retreat.

For his part, Sacinandana Swami is involved in every single detail of the retreat, from decorations to how devotees are met when they enter the venue, to create a supportive experience for each participant. 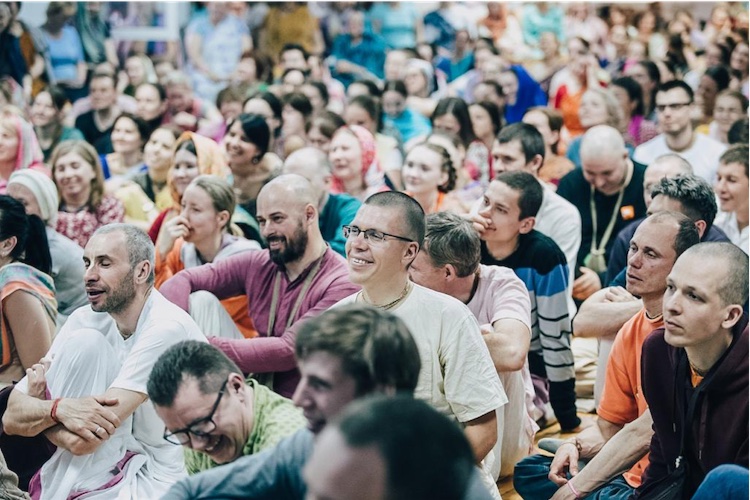 “I was very impressed at how it felt like Maharaja was bringing you on a journey,” says Rukmini. “And that was really powerful, because often when we go to Kirtan Melas or other programs, it’s kind of like a free-for-all, you’re in charge of your own experience, and it’s very easy to be distracted. But at the Living Name Retreat, from the first lecture to the last, Maharaja was so thoughtfully bringing the entire audience on this step-by-step process. And you can feel an actual group transformation by the last day.”

This attention to detail even includes support after the retreat has ended, to make sure participants keep connected to the experience and retain the benefit to their daily spiritual practice.

“On the last day, Sacinandana Swami has everyone write a letter to themselves,” Rukmini says. “Because in that moment, you’re feeling deeply connected to your japa. So you write encouraging yourself to stay on the path at a time in the future when you might be struggling.”

All the letters are then offered to Lord Balarama to give the participants strength. “Three months later, everyone gets a letter to themselves,” says Rukmini. “And so many people were so touched by it. I remember I treasured that letter.”

Support also continues after the retreat in the form of weekly follow-up emails and training newsletters from Sacinandana Swami, with japa reminders, inspiration and tips.

Rukmini says she and some of her friends have already signed up for this year’s retreat. “It’s really cool to see my own peer group excited about a japa retreat,” she says. She adds that the experiential learning it provides is extremely powerful, and the feeling for the Holy Name one develops during it can be tapped into again by remembering the retreat during the inevitable ups and downs that come later.

Even senior devotees who have been chanting for decades found the retreat life-changing. “I have to admit, by my nature, I’m not one inclined to sit peacefully through any type of presentation,” Ritadhvaja Swami wrote to Sacinandana Swami after attending last year. “But this Living Name Retreat was special, in that it captured my heart and mind. It was organized very specifically to keep us on our feet, eager and anticipating the next episode.

“Prior to coming I noticed, once again, different, old, and unwanted japa habits were creeping back in, due to becoming complacent in my chanting. I was actually deeply praying for a change to come about to help me out of this quagmire – and The Living Name Retreat sent my soul into a deep space. So thank you again from the depth of my heart.”

Sacinandana Swami himself summarizes his hopes for his retreats in one succinct sentence: “I would love to see happy devotees, chanting with taste.”

Watch a livestream of the event here: https://www.facebook.com/newvrindaban108/

Keep up to date here: https://www.facebook.com/LivingNameRetreat/

Sacinandana Swami will hold the following Living Name Retreats this year, including retreats held for the first time in Italy and Ireland: