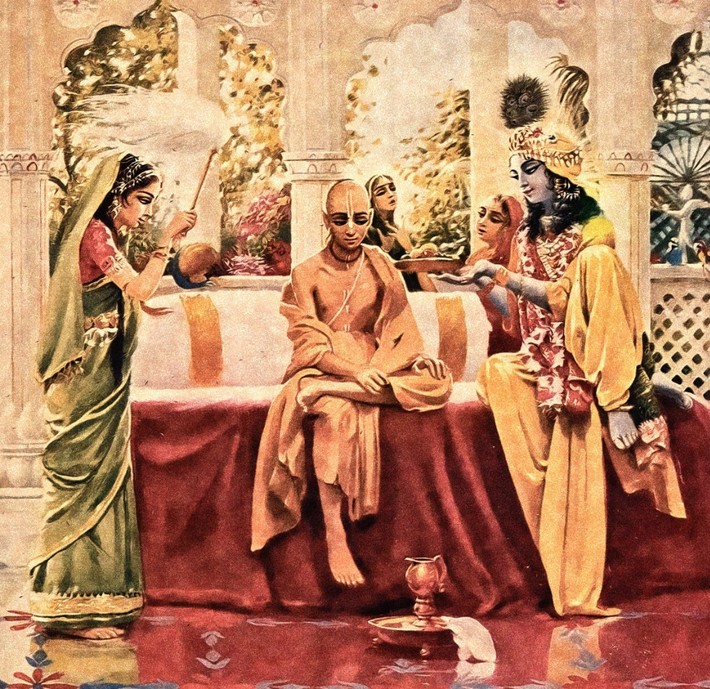 The Sanskrit word atithi means ‘not scheduled’. An ‘unscheduled’ or unexpected guest is considered a representative of the Supreme Lord, since his arriving unannounced is just what the Lord might do to test His devotee and see how ready he is to serve Him in any situation. With this understanding, we should offer the unexpected guest full hospitality.

Members of the general public, invited guests, life members, V.I.P.s, visiting Vaishnavas, relatives of Vaishnavas all should be treated in such a way that they will feel comfortable and want to return.

A single thumb rule is that we should treat guests as we ourselves would like to be treated.

The Lord’s temple, whether open to the public or in one’s home should be a place where visitors can take part in temple activities as far as possible.

In the International Society for Krishna Consciousness, the proper reception of guests is very important, since the Society is a preaching mission.

As followers of Srila Prabhupada, the Founder Acharya of ISKCON, we should consider any guests in the temple to be his guests.

Proper reception of a guest can make the difference between a person coming once to the temple and never returning, or becoming a regular visitor and ultimately becoming a devotee of Krishna.

Even the most first-class, opulent Deity worship will fail to attract a guest if the temple residents neglect him.

Therefore anyone who comes to the temple, we should consider ourselves to be the servants & them to be special guest of Sri Sri Radha Gopinath and Srila Prabhupada.

According to the Pancharatrika-vidhi, one shows respect by:

One should generally respect elders, parents and teachers by rising from a sitting position, identifying yourself and offering obeisances.

Worship and gifts are reserved for the spiritual master or for special occasions, such as weddings or sacrifices.

You should respect a guest according to his position, determined by wealth, age, and relationship as your relative, by varna (Brahmana, Kshatriya and so on) and by knowledge (teacher, spiritual master).

The main elements in receiving guests are the offering of proper respect and conveniences, including food and water, a place to sit, kind words, any service for the comfort of the guest (such as bathing facilities), and a place to rest. When the guest first arrives, you should go out to meet him, and when the visitor departs, you should accompany him, at least out of the premises or the yard.

You will generally respect elders, parents and teachers by rising from a sitting position, identifying yourself and offering obeisances. Worship and gifts are reserved for the spiritual master or for special occasions, such as weddings or sacrifices.

In India the custom is that even an ordinary person is offered a glass of water if he suddenly visits and one can not offer him foodstuff. If there is no water, then one can offer a sitting place, even if it is on straw mats. And if one has no straw mat, he can immediately cleanse the ground and ask the guest to sit there. Supposing that a householder cannot even do that, then with folded hands he can simply receive the guest, saying ‘Welcome’ And if he cannot do that, then he should feel very sorry for his poor condition and shed tears and simply offer obeisances with his whole family, wife and children.

Proper reception of guests is the special duty of the grihastha. If the grihastha does not receive an unexpected guest warmly, no matter who he is, he commits a great sin.

After everyone had finished his lunch and washed his mouth and hands, Sri Chaitanya Mahaprabhu (as a sannyasi) personally decorated everyone with flower garlands and sandalwood pulp.(Cc Madhya 11.210)

As father and mother, they should be offered proper respect according to social custom, but you cannot accept their non-godly instructions. Best thing, to avoid misunderstanding, is to remain silent without any affirmation or negation of their instructions. (Letter from Srila Prabhupada, 29 March 1968.)