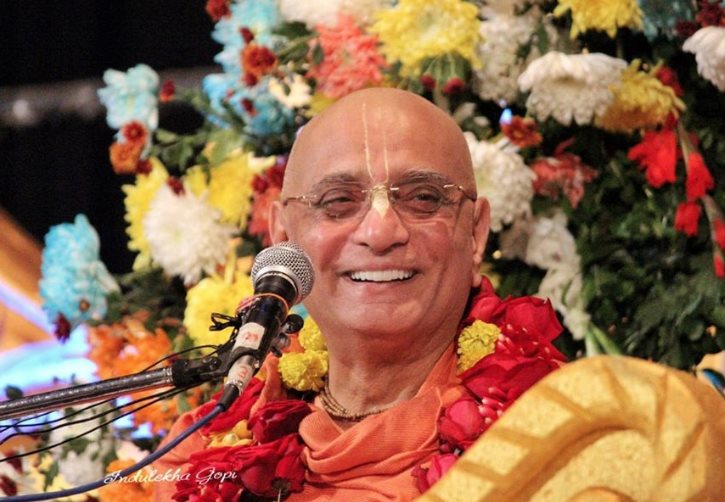 “It’s a sad day to be joining a ceremony dedicated to the remembrance of Bhakti Charu Swami Maharaj.

I think that now is the time for us to really take those instructions that we read in Srila Prabhupada’s offering in the Shrimad Bhagavatam to his spiritual master to heart. And that instruction is that he lives forever by his instructions and his disciples and followers live with him. And this is the case for His Holiness Bhakti Charu Maharaj as well. Although it is a great misfortune that we will not have his personal association, his instructions and his example will live for us to get forever. And for myself, Bhakti Charu Maharaj was always an example of intense affection and intense dedication to Srila Prabhupada. I saw that exhibited the first time I had a personal interaction with Bhakti Charu Swami Maharaj, and that was in the summer of 1977 in Vrindavan when we were all serving here, and Srila Prabhupad was bringing his pastimes in this world to an end. Many times while sitting in Srila Prabhupada’s room, I would observe how when Prabhupad heeded some comfort, when Prabhupad need somebody to speak to very closely and when Prabhupada wanted to hear the loving words of his disciples, he would call Bhakti Charu Maharaj and they would sit and speak very sweetly and intimately in the Bengali language.

On August 28, 1977, this was the evening when His Divine Grace left Vrindavan to go for his last preaching tour in the West. We know that Srila Prabhupada only made it as far as London and then he returned to India. So Srila Prabhupada left that evening and took his car to Delhi to take the flight out. And the next morning I went to clean Srila Prabhupada’s kitchen and when I walked inside, I found Bhakti Charu Maharaj. He was sitting in the kitchen with his head in his hands, and he was just crying and crying and crying… I asked him, “What is the problem?” And he explained to me how he had been meant to travel with Srila Prabhupada, but unfortunately, his passport wasn’t ready, so he couldn’t travel. And I can really see in this devotee, how much dedication, how much feeling of love and desire to serve he had for His Divine Grace Srila Prabhupada. I saw that same dedication and that same spirit of serving for the next 43 years. Sometimes when I tell him that I felt challenged by something, Maharaj would say that if Lord Krishna gives this mercy even an ant can become a Brahma. And I saw how he had that mercy of Srila Prabhupada and how he had that mercy of Krishna. He did so many glorious things for our society and for individual devotees. He made so many sterling first-class disciples throughout the world, many of whom I can say are some of my closest friends.

I think something that will come up time and time again is that Bhakti Charu Maharaj was a perfect gentleman. I don’t know if it has been written, but when I was young, I heard that Srila Prabhupada said that the definition of a Vaishnava is that he is a perfect gentleman. And that was Maharaja’s nature. He always lived in Vaishnava sadachara, he always acted in Vaishnava sadachara. When you were with Maharaj, you felt like all the time in the world had come to a stop and you felt like you were the most important person in this world because he was giving you so much true undivided attention, care, and affection. I might say that in the 43 years that I knew Maharaj, he was always very kind and very compassionate to me. I, along with the rest of ISKCON will deeply miss having Maharaja’s association, having him cast his smile upon me, having him giving me one of his big embraces, having him invite me for prasadam in his room that was always an event that we looked forward to all year long. 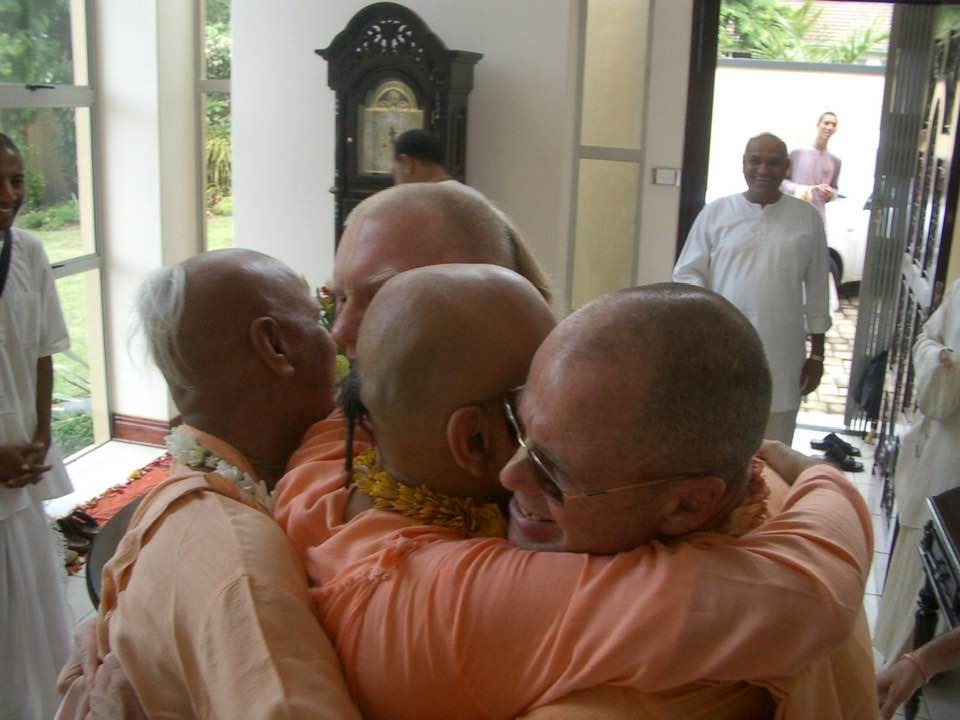 I pray that one day I will be reunited with Maharaj, that I can see him, serve him and learn from him again. And for me in a situation like this, an important message comes through that we are surrounded by a galaxy of wonderful advanced Vaishnavas in our ISKCON society, and we see the wonderful exemplary activities that they perform, and many times we never express our appreciation for them. It just like now I think, “Gosh who knew that Bhakti Charu Maharaj would be finishing his activities in this world and going back to join Srila Prabhupad, and engaging according to Krishna’s desire.” Certainly, if I have known, I would’ve told him how much I appreciate him and how much I love him. In the same way, I think all of us should start getting into the habit of not waiting until Vaishnav leaves this world, but we should start showing our appreciation and showing our love in advance. We should learn how to pay it forward and really let the Vaishnavs know that we care and we love them for the wonderful sacrifices that they’ve made in the service of Srila Prabhupada.

Thank you all very much. I am sure that many wonderful rememberings of Bhakti Charu Maharaj will come forward this evening, and we should relish those remembrances and keep them close to our hearts, and let them give us inspiration in the development of our faith in our spiritual masters and in our ongoing devotional service to Radha and Krishna.