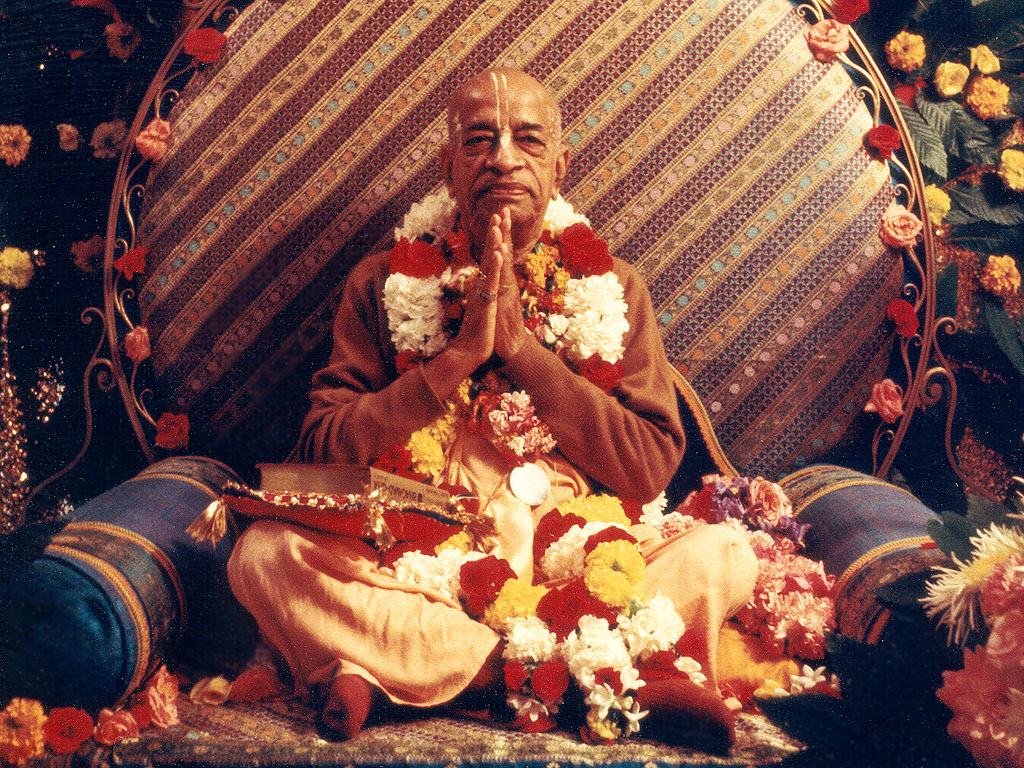 Yesterday was Guru Purnima, appearance day of Sri Vyasadeva, who compiled all the vedas in a written form, towards the end of dwapar Yuga.

Srila Prabhupada is widely respected as the foremost Vedic scholar, translator, and teacher of the modern era, a great proponent of Bhakti yoga, but he did much more. Sri Vyasadeva compiled all vedic knowledge in written form in sanskrit language. Srila Prabhupada compiled most prominent vedic scriptures in an easy to understand English language, the modern universal language, translating more than 70 books and then ornamenting these scriptures with his famous Bhaktivedanta purports.

Srila Prabhupada translated and wrote commentary on the universally most accepted and acknowledged vedic scripture – Bhagavad Gita. He also enlightened a confused and misdirected innocent public with the topmost vedic scripture- Srimad Bhagavatam. Srila Prabhupada also translated and wrote commentary on Sri Caitanya Caritamrta, thus giving access to the universal teachings of Sri Caitanya Mahaprabhu to all the humanity. He translated Isopanishad, Bhakti Rasamrta Sindhu, and many other vedic scriptures, explaining all them in their originally intended meaning or ‘as it is’. Every single word written by him is now quoted and accepted as a vedic reference.

Yesterday, while reading Srimad Bhagavatam, I came across below para.

The above para explains how even a demon like Hiraṇyakaśipu got liberated simply by constantly thinking about his own son Prahlada, who was a great devotee of Lord Krishna. As I read the above lines I realised how these lines are also true for all of us, at least for my own self. We all have demoniac tendencies in our heart but if we develop love for Srila Prabhupada then Krishna will deliver us as well.

An advanced devotee is attracted by the service rendered by an eternal servitor of the Lord. This attraction is called spontaneous attraction. Technically it is called svarūpa-upalabdhi. This stage is not achieved in the beginning. In the beginning one has to render service strictly according to the regulative principles set forth by the revealed scriptures and the spiritual master. By continuously rendering service through the process of vaidhī bhakti, one’s natural inclination is gradually awakened. That is called spontaneous attraction, or  rāgānugā bhakti.

We can look back and clearly see which self effulgent personality rendered most service to Krishna by spreading Krishna consciousness all across the world. By observing the stellar role played by Srila Prabhupada, starting preaching at an advance age of 69, circling the globe 14 times in eleven short years, sowing the seed of Krishna consciousness in all the major cities of the world, opening 108 temples across the world, including large ones in Vrindavan and Mayapur, reviving and spreading vaishnava tradition throughout India, being aware of the essence of all the vedas and the teachings of Sri Caitanya Mahaprabhu he taught and guided his disciples how to apply them practically in daily life, he ran his international society, while travelling worldwide, simply by letters and on top of all this he translated books almost every single night from midnight to 4.30 am! This way any intelligent person can develop deep appreciation and attachment for his lotus feet. He remains a living example of Sri Caitanya Mahaprabhu’s golden words ‘kirtaniya sada hari ‘, he was busy spreading the glories of Lord Krishna till his last day on this planet.

By sincerely rendering service to Srila Prabhupada- by reading his books, following his instructions, preaching, book distribution, cooperating with devotees in serving ISKCON, serving the devotees, an intense desire to love and serve such a premi bhakta will naturally awaken within our heart.

An equation of love

Certainly you are mine and I am Krishna’s, therefore you are also Krishna’s. In the Krishna Consciousness activities that is the process. By following the disciplic succession, beginning from Krishna, everything becomes ultimately connected with Krishna. And Krishna being absolute, anything connected with Him becomes absolute, without any duality of concept like in the material world.

Sri Caitanya Mahaprabhu sent Srila Prabhupada to liberate all the conditioned souls like us. We are all his eternal servants and he is Krishna’s eternal associate. All of us, his disciples, grand disciples, admirers & followers, are entitled to develop a loving relationship with Srila Prabhupada and become eligible to receive similar sweet affection from his lotus feet.

All glories to Sri Guru and Gauranga

All glories to Srila Prabhupada