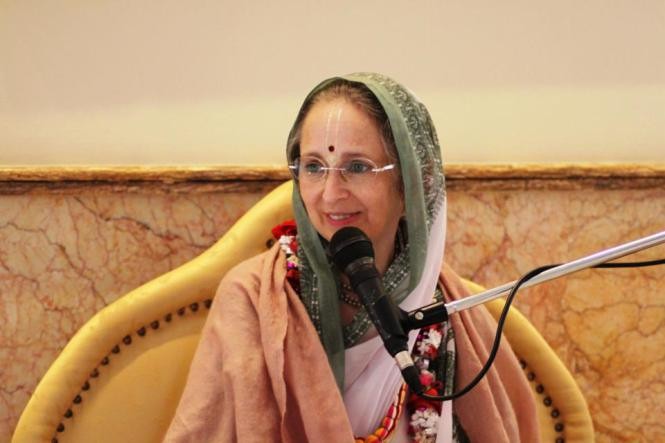 “In the last week of the last year of school, students sweat at the thought of the final exam. When they’ve passed their exams and earned their degrees, they’ll be entitled to call themselves educated.

But the Vedic culture has a different standard. The sage Canakya, whose proverbs Srila Prabhupda would often quote, tested a person’s education by three questions – questions of character and ethics.

Test one: matrvat para-daresu. In the ideal system of education, a properly trained young man should be able to look upon any woman other than his wife as if she were his mother. In other words, his mind and heart should be free from desire for sex outside of marriage. Similarly, a girl should see men other than her husband as her father.

In Vedic society, boys were trained to address women as “Mother.” Members of the Krsna consciousness movement teach this same etiquette today. Lord Jesus taught a similar principle when he said that a man who lusts after a woman other than his wife has already committed adultery in his heart.

Garbage in the Street:

The second test of real education is how the graduate views the property of others. Canakya says, para-dravesu lostravat: a learned person looks upon others’ property as he would stones or garbage in the street.

A child should be trained to be averse to touching another’s things without permission. If I see one of our students touch something on another child’s desk, I ask him, “Is that yours? Do you have the owner’s permission to touch that? If not, put it down.” I’m careful to show the same respect for the students’ property that I expect them to show for each other’s and for mine. I don’t look through their desks or touch their things without their permission.

How to See Others:

Third, atmavat sarva-bhutesu: an educated person sees other living creatures as he sees himself. Following the golden rule, he treats others as he wants to be treated. “Others” does not mean just one’s own family, one’s fellow citizens, or even just other human beings. As Srila Prabhupada would point out, even cruel, fierce animals such as tigers love their own cubs. It is when a person applies the golden rule even to an enemy or a defenseless animal that Canakya would award him a passing grade.

A person educated to see others as though himself will naturally be a vegetarian. He’ll think, “I don’t like pain, so why should I give pain to an animal just so I can eat?” He’ll be honest: “I don’t like to be cheated, so why should I cheat others?” And he’ll always speak beneficially: “I like to hear the truth, I don’t like to be insulted, and I want to hear what is useful to me. Let me speak to others that way.” A truly educated person, therefore, will try not to hurt anyone, even by his words.

A student who knows the law of karma knows that what I do to others will be done to me. Even out of self interest, therefore, he will follow the principle of treating others as though himself. And by understanding the law of karma, the student will gain respect for the power, justice, mercy, and love of the Supreme Lord. Then the student can go beyond ethics to become transcendentally educated.

Krsna defines a learned person as one who sees all living beings spiritually as part of Him. And Krsna says that ultimately a wise person surrenders to Him, seeing Him as all there is.

Unfortunately, in this dark Age of Kali thousands of schools award diplomas without considering the ethical and spiritual character of their students. Do students at a typical university have a heart free from desire for sex outside marriage? Have they learned to respect the property and feelings of others? We read of date rape and rampant theft on campus, and we see people with advanced degrees who are also advanced in meat-eating and cruelty.

But we need not be resigned to letting our children be falsely assured of knowledge from a system that by Vedic standards teaches ignorance. Rather, let us raise a generation of students protected by ethical and spiritual wisdom.”

Source:http://www.dandavats.com/?p=1481
E-mail me when people leave their comments –
Follow