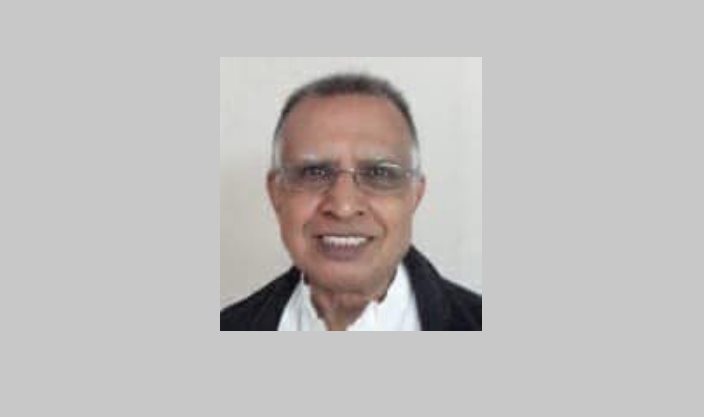 Rameshwara Prabhu was a devotee who lived in London near the Manor.

He is a disciple of Bhakti Charu Maharaja and he passed away early this morning UK time as a result of the coronavirus, he’ll be sorely missed not least by his dear wife Krishangi dd and family.

His Grace Rameshvara Prabhu was a soldier, a valiant warrior for Srila Prabhupada’s ISKCON. He never saw a challenge that was too difficult to contend with and always fought until he could offer victory to Srila Prabhupada. He left this world with the very same fighting spirit to achieve a personal victory to cross over this mortal world. A victory that will be celebrated by vaisnavas all over the world, who prayed to invoke the Lord’s presence and protection as Prabhu took his final breath.

With tears of sadness and separation, the vaisnavas of the ISKCON world continue to celebrate Rameshvara Prabhu. His reputation and glory are very deep, very expansive and have touched many thousands of devotees in a variety of projects around the world. He was a pillar. He was a source of sound advice. He was bold and always ready to take risks. He was very generous. He would chastise out of love and correct to bring focus on the tasks at hand. He was fatherly. He cared. He brought many to Krishna and he was devoted to serving his spiritual master His Holiness Bhakti Charu Swami, Srila Prabhupada and the ISKCON mission unconditionally. His presence of clarity and uncompromising will to get things done will be sorely missed.

Rameshvara Prabhu’s contribution of over 35 years of service spans throughout the UK, Europe and India. From the late 80’s his family started hosting the North London sanga’s with HG Harivamsa Prabhu. Attracted by the mission and feeling concern for the need to support Bhaktivedanta Manor, he became more committed. As a founding member of the Manor’s Patron Council, he along with other devotees found many other families to commit their financial support for Bhaktivedanta Manor. During this phase of the late 80’s and early 90’s, the Manor was also gripped by the legal battle due to the threat of closure. Rameshvara Prabhu personally took on many risks in raising funds and strategically working to secure the land for building the new road into the Manor. The glorious victory of the Manor campaign in 1996 is testament of how Rameshvara Prabhu worked with and served tirelessly to get the desired result, the only result that could be offered to Srila Prabhupada and his beloved Sri Sri Radha Gokulananda.

Rameshvara Prabhu’s ability to fight and take on big challenges attracted the attention of many senior devotees. They invited his help and perspective on difficulties faced in their preaching fields. The early 90’s saw many challenges faced by the New Mayapur community in France. With Bhakti Charu Swami involved in the fight to secure its future, Rameshvara engaged not only himself but brought along colleagues from the Manor to support the New Mayapur community.

He also saw the need to support projects in India, he particularly had a keen interest and soft spot for education. He was moved by the endeavours of Rupa Raghunatha Prabhu, serving the poor of Vrindavan and lent his support, guidance and direction to set up the Sandipani Muni Schools to serve the poor families of Vrindavan and offer not only meals but life changing education and opportunities. That project has now grown to 3 schools serving over 1500 students.

In Sridham Mayapur, Rameshvara Prabhu stepped in to help Bhakti Purusottama Swami and established the local Bhaktivedanta National School, overseeing its growth, needs and constantly endeavouring to arrange the right support for the school to deliver good education to its students. Recently, Rameshvara Prabhu sponsored schools to serve the tribal communities in the rural parts of Bengal and beyond. In serving these schools projects, he engaged many people from business friends to famous authors and clients of his. He had the knack to draw donations from many to serve Krishna in a variety of glorious ways.

Schools and education were a key theme of his life. In the UK, he supported the setting up of the Avanti Schools. He was founding Trustee of the I-Foundation and continued to serve by offering financial and strategic advice throughout the growth of Avanti’s 7 faith and 4 non-denominational schools in the UK

Rameshvara Prabhu always served his spiritual master with attention and devotion. He supported many projects initiated by Bhakti Charu Swami, especially the building of the beautiful temple in Ujjain, which was built in record time. With frequent visits to Ujjain, he cared, he planned, he arranged ways in which to continue to support this important project. Just a few days ago he was in conversation with devotees to arrange a fund that will continue to serve the Ujjain project.

His legacy in the UK extends beyond Bhaktivedanta Manor. He was always available for sound property and financial advice to the UK Management Council. He advised on the acquisition of the new temples in Dublin and Cardiff. In Leicester, Rameshvara Prabhu has been integral in the purchase of the iconic Victorian bank at the heart of the City. Not only the purchase but Rameshvara Prabhu along with Pranabandhu and Prashun Prabhus guided the devotees in Leicester to build their patron programme and in 2015 he and other Manor colleagues arranged a substantial donation to undertake the renovation of the temple. This renovation culminated in the arrival of Sri Sri Radha Madhava to Leicester and being situated nicely for worship. The devotees in Leicester feel indebted for his ongoing encouragement. He has left them in a better place, a place of serving Radha Madhava, which they will continue to do in honour of Rameshvara Prabhu.

There are countless devotees he has helped on a personal level, making material arrangements, ensuring they are engaged in some service and compassionately ensuring that their needs for living were taken care of. He was a well-wisher of many, always spoke the truth but with genuine concern. He was a true friend.

We salute a valiant soldier. We offer our repeated obeisances to a warrior. We express our gratitude to a kind and warm-hearted father and husband. We offer our respects to the devotion of a dedicated disciple. We celebrate a life of unconditional devotional service. We bid farewell to a hero and we will fondly remember him for evermore.

All glories to Rameshvara Prabhu