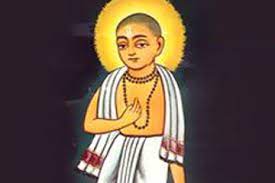 Every year Mukunda Dasa, Madhava Dasa and Narahari Sarakara would go to Jagannatha Puri to take darshan of the holy feet of Shri Chaitanya and to dance and chant in Rathayatra kirtan.  One day, Chaitanya Mahaprabhu affectionately asked Mukunda Dasa, “Mukunda! between you and Raghunandan, who is the father and who is the son?”

When he was a boy, Raghunandan used to make the deity eat laddu.

According to certain authorities, Shri Raghunandana Thakura was Kandarpa Manjari. According to others, he was one of Krishna’s sons in Dvaraka whose name was Kandarpa. This is on the basis of Kavi Karnapura’s Gaura-Ganodesha-dipika.

Raghunandan Thakur bequeathed the service of his Gaura-Gopal deity to his son Kanai Thakur and then left this world on the fourth day of the waxing moon in the month of Shravan. Kanai Thakur gave a feast as a part of his father’s last rites: