In healthy families and communities, both male and female are valued equally. A flourishing child’s psyche is guided and protected by the father figure, while the mother figure nurtures growth and development. Without such a stable structure, children perceive a hostile world (lack of feminine nourishment) within an empty universe (lack of masculine direction giving meaning and purpose). Without proper relationship to mother and father, a suffering condition develops which tempts its subjects with intoxication in order to fill the void and dull the pain.

Without loving families and communities, we feel inadequate, lost, with no sense of belonging. Unable to tolerate, we rapidly fill that void with artificial types of happiness. These “quick” fix solutions simply exasperate the distress.

In fact, in current times, we see how everything has to be faster and faster. “Snail” mail is outdated and high speed internet is considered a necessity of life which can answer all of our dilemmas. We live in a society where the price of fixing something exceeds the cost of a new one. Modern consumerism requires petroleum and fuel from the earth, drawing out more of her energy. Although it is simpler for the individual to dump broken items and waste into a landfill, the toxic waste burdens Mother Earth, kills our life support systems, and concurrently pollutes our collective unconscious.

As this mentality expands, it pervades within the realm of our relationships which also become disposable commodities. There is not enough time to cultivate meaningful connections. Accustomed to the comforts and luxuries of technology, parents work harder and longer to earn more money to provide what the global and socially transmitted disease of Affluenza (addiction to modern conveniences and the narcissism that it aggravates) deems as “normal”. There is therefore less time and energy for children.

Having strong relationship with both parents offers more than mere emotional stability, it furthers connection to the supreme seed-giving Father of all (Krishna) and the original Mother (Radha), the tender-hearted feminine beloved of the Lord. Organic lifestyle and quality time with parents can help offspring naturally develop faith in God above (dharma) and respect for Mother Earth below. Such healthy individuals propagate the perennial seeds of prosperity, living in communion with God’s plan.

Conversely, the ongoing disintegration of our culture, of our families and communities, and of sustainable infrastructures, has destroyed our natural sense of rejuvenation and regeneration. It has become evident to many that we need to “slow” down and develop a long term scheme that will conserve our natural resources, as well as preserve our relationships. However, Krishna has already created such a system. Maybe it is time to re-examine how to incorporate His gifts.

Understanding our relationships, our place and purpose, facilitates God’s original plan and will to resonate and blossom within us. It is our dharma, our constitutional position, to feel and experience our relationship to the Lord. In the Varnashram system, agrarian lifestyle naturally appreciates and utilizes male and female energies in order to maintain a balance. Honoring Mother Earth, we develop genuine respect for birthing (renewing), nurturing and growth processes. We value our many mothers which include, our human mother, Mother Earth and Mother cow. The Male figure in the Agrarian society is represented by the Bull – the protective and providing father.

To re-establish an ox program as a component to a more holistic lifestyle will facilitate a breakthrough in consciousness, piercing the layers of denial of our addictions, confronting our attitudes about the masculine and the feminine, as well as humbling us and preparing our consciousness for the profoundly deeper spiritual significance of what Srila Prabhupada wanted for us at New Vrindavan.

Foremost among Srila Prabhupada’s primary mandates for New Vrindavan was cow protection and agriculture. He emphasized the position of the cow and the bull as the mother and father figures in order to safeguard our consciousness from seeing them as objects of our exploitation. 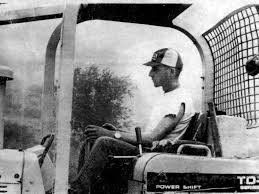 Cow protection, as set forth by Srila Prabhupada was not merely that the cow and the bull lead a full and natural life, but that they also be jolly, as a member of a family would feel. Cows and bulls are happy to be fed and brushed. While cows like to be milked, the main source of pleasure for the ox has been obscured by the tractor. An ox is a bull who has surrendered his procreative potential, transforming that energy into a submissive and manageable temperament capable of being trained and utilized for agricultural and transportation services. As a father figure he loves to provide for his family of humans by pursuing his occupation in the field which assures a source of income and prosperity to mankind.

From the inception of the New Vrindavan vision until his later visits, Srila Prabhupada showed consistent concern that the bull maintain a solid footing on the soil of the holy dhama and in the agricultural field. He considered the use of tractors as a concession, only to be used in addition to oxen, never as a replacement. When the father figure is unemployed, the family can experience only temporary and artificial prosperity, nothing secure, long lasting or fully satisfying. At some point in time, an unemployed father (the bull), will be seen as a burden to the family.

Cultivating a relationship with Mother Earth by utilizing the Father figure, the bull, brings us together in community spirit. In an agrarian culture, both planting and harvest are festive occasions where everyone comes together in a joyful mood, delighting in preparing an offering of the gifts of Mother Earth, plowed by Father Dharma, back to their source, Sri Krishna. If we as devotees of Krishna cannot employ our father and appreciate his position as provider, how will we ever develop a wholesome love for Krishna, Who so dearly loves both the cows and the bulls?

As a replacement to the sustainable culture of the land, in the Iron Age, in order to produce machines, Mother Earth is exploited for iron ore by industrial enterprises fueled by petroleum. In India, rubber trees are planted to replace the sandal wood forests, meaning that tires are given preference over articles of sacrifice. Every step of the industrial world diminishes the life force of the planet. Chemical fertilizers are used which adversely affect our lives, poisoning both the soil and those who partake of the toxic crop.

Conversely, every step in cow protection and ox power enriches the ecology with renewed life and vitality. Fuel for the ox team is grass which otherwise needs to be mowed. When it becomes food for the ox, it returns to the earth transformed and enhanced as manure, liquid gold. When a tractor dies, some of its parts are recycled, some go to the toxic waste dump; whereas a deceased ox contributes to mrdunga heads, bull horns for the deities, ayurvedic remedies and the rest of his body is composted back to Mother Earth.

Furthermore, tractors, cars, and machines often become an extension of ego and aggravate the false identity we are attempting to overcome. In training and driving an ox team, the animals will never cooperate with the egotistic outbursts of man. They cannot be “controlled” like a machine and so they serve as a mirror reflecting the passionate and stubborn attitudes of ego. Driving an ox team can assist a devotee in learning patience, sensitivity and a cooperative spirit, such a precious service which a tractor cannot offer.

In addition, while working a team of oxen, the teamster is never haunted by the scarcity issues which accompany the tractor (how will I pay for the machine, parts and fuel and replace the tractor when it wears out?) By the time an ox team retires, it has already been replicated (reproduced) many times over since about one half of calves born are bulls. In working the land with oxen, every step leads to prosperity, whether that comes in the form of overflowing bounty, the faith that Krishna will always provide enough to go around, or simple lessons in cooperative team spirit.

The full range of spiritual and practical import served by the bull is integral to our Krishna Conscious culture, New Vrindavan’s identity as the very first farming community, as well as a source of insight into the subconscious mind. The bull stands as an emblem of male fecundity or procreative potency which tends to be wild and combative until tamed and disciplined.

The common sight of a bull driving a turnstile reflects the image of Vrishabha, the macrocosmic Vedic bull, who sets the turning of the universe into motion and is the source of Dharma, whose four hooves represent the four pillars of spiritual life: cleanliness, austerity, mercy and truthfulness. At the end of each Yuga, Vrishabha lifts one of his hooves from the ground indicating the loss of yet another pillar.

In Kaliyuga, truthfulness alone stands, and even that is being challenged. While Kali attacks in an attempt to exploit both Dharma, the bull and Bhumi, Mother Earth, Maharaj Pariksit intervenes to re-establish Dharma. Without the bull and the cow – spiritual culture diminishes being left with “no leg to stand on”. Cow protection both ensures and indicates the barometer, the spiritual health of the society. The work of the oxen is represented by the plow which turns under the weeds of the field and opens the furrow where seeds of our sustenance as well as seeds of bhakti are sown and cultivated for the upcoming harvest.

Placing dharma back in the field represents more than a satvic and sustainable way of life, as these are mere consequences, not the actual fruits of the harvest. The root significance is valuing Krishna’s arrangements and Srila Prabhupada’s intent for us, the spiritual foundations for everything else we do. Combining our efforts to include all the essential ingredients offered by Srila Prabhupada, we can assist in re-creating New Vrindavan as a harmonious, interdependent farming community, where sustainability is manifest in both earthly and spiritual ways. The world can then see a true and complete solution to the ominous ecological crisis overshadowing us all.

In attuning our lives with the rhythms of earth culture, we live in harmony with Mother Nature and her laws and in accordance to dharma, Krishna’s design for order in the universe. Honoring archetypal mother and father figures facilitates understanding real meaning and purpose in life while creating a deeper connection to our universal and merciful Mother, Srimati Radharani, and to the message of our Father, Lord Krishna: to chant His holy Names.

The Maha Mantra is likened to the sound of Sri Krishna’s flute song which calls all the lost cows back home. Sri Krishna, by his flute playing and the rope He carries, assures the cows will be home in time for their milking. His big brother, Dauji, by the plow He carries, ensures that the oxen will be properly situated. And Srimati Radharani, Vrishabhanu Nandini, by the Name She cherishes, assures that the archetypal bull, Vrishabha will forever be honored.

Although lost and misguided, we can follow in the footsteps of the cows and the cowherd boys and girls. By chanting Krishna’s Names, attracted by that sacred vibration, we too can return home to Krishna’s heartland.