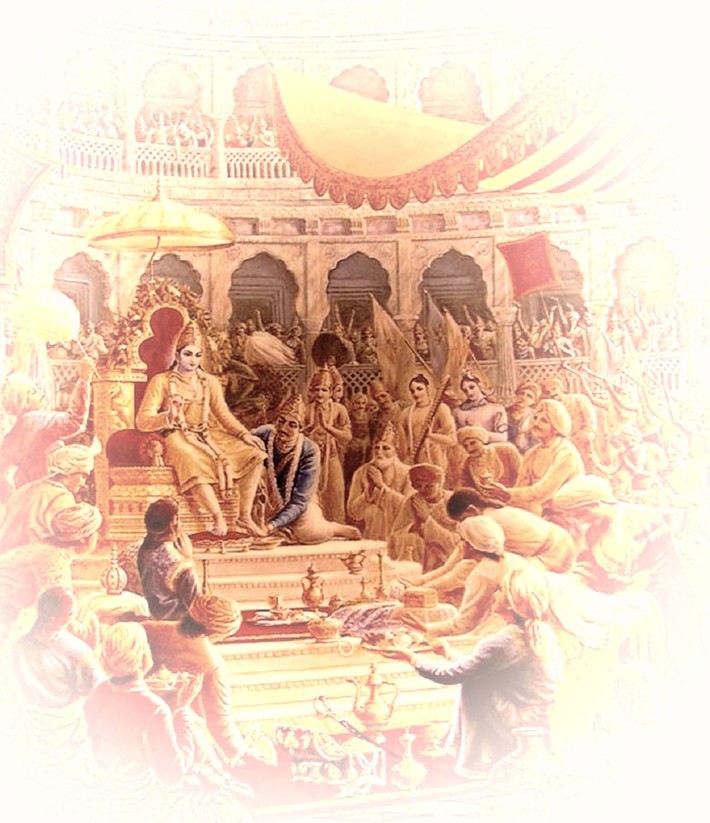 A sign of a good leader is that he does not request those under him to do something that he is not prepared to do. So before we desire to distribute this Vedic culture to the whole world, we ourselves have to be following it in such a way that nobody can find even a minute discrepency in our practice. People are too attached to their sense gratification and wont be so readily eager to give it up, and although they may have some attraction to the Vedic culture, if the mind can find an excuse for why they should not practice it, they will most likely follow the mind. They are seen that the Vedic culture is the actual original culture with the most bonafide and practical philosophy. They want to see whether this is really what they and their family will want to commit to. They ussualy base their desisions upon seeing the way the current practioners practice. The common question that arises is: ”The Vedic culture has the worlds best philosophy but is it practical for me and my family?” So if the character of the preacher is spotless then they will wholeheartedly embrace this culture, the opposite is also there.

Why is there a need for promoting Brahminical Culture?

Sukadeva Gosvami said: Then, O King, religion, truthfulness, cleanliness, tolerance, mercy, duration of life, physical strength and memory will all diminish day by day because of the powerful influence of the age of Kali.

In Kali Yuga all good will decrease day by day and we can see both in our personal lives and our surroundings how true this is. We are still in the golden age part of Kali Yuga, one can just imagine how life and society will degregate as this age advances. By presenting this culture as it is without comprimising the philosophy to defend and maintain our sense gratification. This culture is non different from Krsna and one does not have to therefore try and do something special to attract individuals. Krsna is all attractive and simply by giving Him as He is, they will be attracted. The devotee is expert and will know how to present this culture to the entire world according to time place and circumstance.

What will people consider a sign of ones advancement?

In Kali-yuga, wealth alone will be considered the sign of a man’s good birth, proper behavior and fine qualities. And law and justice will be applied only on the basis of one’s power.Men and women will live together merely because of superficial attraction, and success in business will depend on deceit. Womanliness and manliness will be judged according to one’s expertise in sex, and a man will be known as a brahmana just by his wearing a thread.

In the age of Kali, a man is considered high class, middle class or low class merely according to his financial status, regardless of his knowledge, culture and behavior. The modern asuric way if life is totally contradictory to the Vedic way of life. Everyone is searching for happiness but they are looking in the wrong places and doing the wrong things to attain this. Every sane human being will consider the Vedic way of life as the ideal way of living in contrast to the hellish existance in which they are currently living in. In this age there are many great industrial and commercial cities with luxurious neighborhoods reserved for the wealthy. On beautiful tree-lined roads, within apparently aristocratic homes, it is not unusual to find many perverted, dishonest and sinful activities taking place. According to Vedic criteria, a man is considered high class if his behavior is enlightened, and his behavior is considered enlightened if his activities are dedicated to promoting the happiness of all creatures.

Every living being is originally happy, because in all living bodies there is an eternal spiritual spark that partakes of the divine conscious nature of God. When our original spiritual awareness is revived, we become naturally blissful and satisfied in knowledge and peace. An enlightened, or educated, man should endeavor to revive his own spiritual understanding, and he should help others experience the same sublime consciousness. All civilized people took it for granted that God is everywhere and that His laws are binding upon all creatures. The Sanskrit word dharma, therefore, indicates one’s social, or public, obligation as well as one’s religious duty. Thus responsibly caring for one’s family is dharma, and engaging in the loving service of God is also dharma.

In the age of Kali the principle of “might makes right” will hold sway.God intends human life to be an opportunity for us to rectify this illusory mode of existence and return to the vast satisfaction of pure, godly existence. But because our identification with the material body is a long historical affair, it is difficult for most people to immediately break free from the demands of the materially molded mind. Therefore the Vedic scriptures prescribe sacred marriage, in which a so-called man and a so-called woman may combine in a regulated, spiritual marriage sheltered by overarching religious injunctions. In this way the candidate for self-realization who has selected family life can derive adequate satisfaction for his senses and simultaneously please the Lord within his heart by obeying religious injunctions. The Lord then purifies him of material desire. The Vedic culture if full with so many purifications for oneself. One can only take the horse to the water but one cannot force him to drink but if one is expert then he will be successful. For someone to ‘accept’ something, it cannot to be forced,it must come from within , it cannot be forced. The current practioners of brahminical culture have to be exemplary in their conduct at all times, for if they mess up even a little, the people who are interested will doubt the practicality of the culture although it is philosophically correct.

Nobody likes to be told what not to do and because they are generally too attached to their current way of living, giving it up immediatedly will be extremely difficult and generally cause a fall down later on. If one, on the other hand gives this culture slowly to people then they will develop a higher taste in time. The devotee is like a doctor who helps to cure the disease of material esistance and suffering. A doctor wont give a child heavy medication to take because it will harm him, although that same medication is benificial to an adult. He will give him medication that will cure him and at the same time not harm him. We have to be expert like this, each and every person is an individual. Instead of telling them what they are doing is wrong and tell them what they shouldnt do, tell them what they can do and encourage them. The devotee is the well wisher of everyone.

By presenting the culture as a way to benifit the society as a whole will be really expert. It doesnt matter what religion you belong to, the principles are universal and benificial to all. People are frustrated and in time they will see that this is the way for them. The preacher must practice in order to acheive success. Purity is the force.