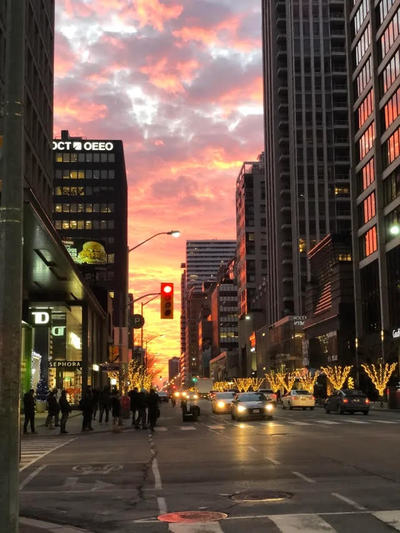 The light winds aroused the spirits of people as I walked on Bloor St., West. It was a struggle at intersections to get my dhoti (lower robes) to behave. But I was having fun with pedestrians.

The first one to approach me was like an elder hippie who came up beside me and said, “Are you on the path of enlightenment?”

To this he responded, “I’ve taken them.” We reached a red light and he made a sudden about face when our communication ended.

Not but five minutes later came another elderly person, bearded and partially bald, who stopped his bicycle to ask, “What do you think of the world?”

“It’s polarized. We need to step up on our dharma.” He wanted clarification. “I mean to say we need to get back to basics; back to obligation.”

I proceeded Westerly when a smiling, middle-aged woman with a son and a partner halted, “How are you, walking swami?”

“I’m talking to people. They want to see a better world.” Just then a motorcyclist recklessly whizzed by. His music was pumped up to the max and he was actually gyrating with his bike quite precariously.

The woman asked me to bless her son, so I uttered a mantra and placed my right hand on his head.

“I used to hang out with you guys when I was at York U, in my anthropology class. I love it at your temple.”

My last encounter was with a Kolkata man who said from behind me, “Hare Krishna!” I turned around and we shot the breeze for a while.