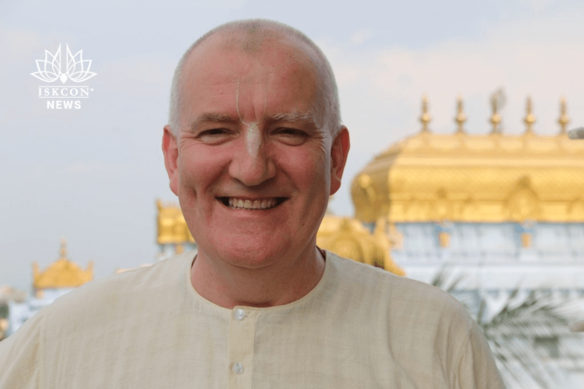 On July 20th, Praghosa Dasa, a Governing Body Commission (GBC) member of ISKCON since 2001, resigned from the GBC. He made his resignation public in a video entitled “An Honor and a Privilege” on his personal YouTube page:

In the video, Praghosa Dasa explains his resignation is due to his disagreement with a GBC decision that is in process regarding Lokanath Swami and his position as initiating guru in ISKCON.

Praghosa Dasa outlined his reasons for stepping down based on that decision not being made, in his opinion, “on the principles of integrity and fairness” nor as “pleasing to Srila Prabhupada” and therefore expressed his inability to live up to the GBC’s code of conduct; which binds all members to support the decisions made by the Body, if he remained a member.

Praghosa Dasa also spoke about his profound appreciation for those on the GBC Body. He acknowledged it is a challenging role to “direct and keep Srila Prabhupada’s movement united”.

“Praghosa Prabhu’s resignation from the GBC is a significant loss to the Body,” said Anuttama Das, ISKCON Minister of Communications. “Praghosa made many substantial contributions to the GBC discussions and decisions over the years, and he was appreciated for his sharp wit and commitment to serving Srila Prabhupada. I know he will continue to make valuable contributions to the ISKCON society.”

The final decision about the Lokanath Swami case is currently being reviewed by the SABHA (Spiritual Advisors Bhagavata Assembly), which serves as a consultative body with the GBC. The SABHA, after reviewing a resolution of the GBC can, by majority vote, recommend modifications to that resolution. Until the SABHA review is complete, the GBC decision is not final. Thus, the GBC has not released the decision publicly.

As currently drafted, the decision provides substantial authority to ISKCON Regional Governing Bodies (RGBs) in how they apply the GBC decision, including the authority to apply additional restrictions upon Lokanath Swami, as has been done recently by the North America Council.

Praghosa Dasa served as a GBC member for the UK and many regions of Europe including Denmark, Iceland, Ireland, Norway, Scotland, and Sweden. He also served twice as the Chairman of the GBC.