Dr Frog was a great scientist among the frogs. He had made his residence within a well. He was an expert in his field of endeavor and knew everything about the well and related matters. One day, one of his friends came to visit him and said, "My dear friend, I have seen a vast mass of water, the Atlantic Ocean."

"What is that Atlantic Ocean?" asked Dr Frog

"It is very vast" replied the other frog

"How vast is it? Is it five times bigger than this well? Or ten times?” enquired Dr Frog in amusement

"No, no, it is very, very vast" said the other frog

“Come on twenty times should be it!" asserted Dr Frog although speculating

This is called ‘Kupa manduka nyaya’. ‘Kupa’ means well, ‘manduka’ means frog and ‘nyaya’ means philosophy. Dr Frog, although an expert in his field of knowledge, was not able to comprehend the vastness of Atlantic Ocean. Because of limited exposure, his estimation couldn’t come anywhere close enough to guage the vastness of the ocean.

So when we speak of "God is great," we cannot imagine how great He is. We apply Dr. Frog's philosophy. Speculation about God is like the speculation of the frog about the Atlantic Ocean. Mundane philosophers and scientists are thinking of God in that way. Dr. Frog's philosophy will not help us understand what God is. The only way to know about God, His creation and related matters is to accept the knowledge from a person who has seen the absolute truth and who is able to deliver the message as it is in the line of disciplic succession. Such an empowered person is known as the ‘Spiritual master’.

In same vein, Modern Scientists and Philosophers may be glorified experts in their chosen fields but their repeated efforts to speculate on aspects beyond their capacity of imagination or measurement has time and again failed to guage the vastness of this creation. The universes are ‘ananta’, unlimited, and therefore as Srila Prabhupada says, we cannot conceive aspects of entire creation by our tiny brain or limited thinking abilities.

With one's limited senses, one cannot argue about that which is inconceivable. Therefore the inconceivable is called ‘acintya’, that which is beyond ‘cintya’, our thoughts and arguments. ‘Acintya’ refers to that which we cannot contemplate but have to accept. Srila Jiva Gosvami has said that unless we accept ‘acintya’ in the Supreme, we cannot accommodate the conception of God. This must be understood.

So by accepting the transcendental knowledge that comes down through in the line of disciplic succession of pure devotees of Krishna, one can rise above the defects of the material mind and senses and reach a scientific understanding of the Absolute Truth, His creation and every other matter that is in line with them. 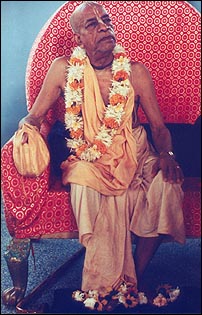