This year’s Vraja Mandala Parikrama was special due to there being a confluence [sagam] of padayatris from three different padayatras:the All-India Padayatra, the Maharashtra Padayatra, and the Uttar Pradesh Padayatra. Also present were the devotees from the soon-to-be-inaugurated (on October 17) Andhra Pradesh Padayatra.

Normally in our Vraja Mandala Parikrama tent city we have tents of various groups such as volunteers, matajis, and prabhujis, but this year we had tents named after the padayatras, thusannouncing the presence of padayatris from all three at the parikrama.

Padayatris walk in their respective areas, but during Kartik they all walked in Vraja dhama with Sri Sri Nitai-Gaurasundar. On day one parikrama commander Istadev dasawelcomed the padayatris, and in describing the objectives of padayatra declared that now there are three padayatras in India and the days are not far off when there will be a padayatra from each state.

The padayatris were given a multitude of services in Parikrama, many having been called one month in advance regarding the preparations.

Uttar Pradesh Padayatra leader Ritudvipa Gaura Chandra dasa and his team would serve drinking water to the parikramakaris, while Rasutsava dasa would serve the sannyasis and senior devotees such as Bhadra dasa and Istadev.

All glories to the leader of Uttar Pradesh Ritudvipa Gaura Chandra dasa for his inspiration.

Maharashtra Padayatra leader Damodarlila dasa and his team would be in charge of international group accommodation.

All-India Padayatra leader Acarya dasa would be in charge of prasadam distribution. He deputedhis team to distribute to each respective group:the Sri Sri Radha-Shyamsundar group (VIPs), the Krishna-Balarama group (International), and the Srila Prabhupada group (???). Prahladvatsal dasa and Parthasakha dasa were the advance party. 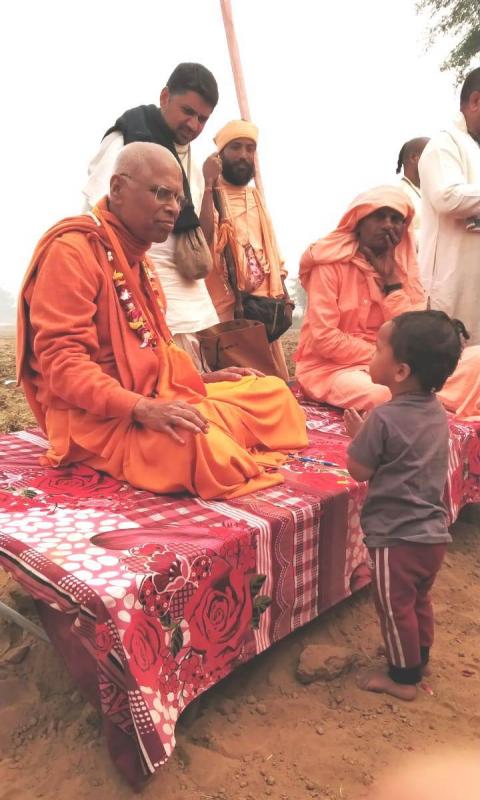 Acarya dasa: This year I was incharge of serving prasadam. It was a wonderful seva. After all the devotees honoured prasadam, I would take whatever was remaining. But the seva was so satisfying. One day after everyone had honoured prasadam nothing was left, so taking it as the Lord’s desire I started walking ahead. One Vrajavasi called me, “Baba, where are you going? Come have some roti.” I thought, “Oh, Radharani is so merciful. She does not let anyone go hungry in Her dhama.”I went to the house and had a hot bajara roti with butter on it. If you serve devotees, the Lord takes special care of you. Then the association of Radharaman Maharaja was a blessing for all of us. He always says, “This parikrama is of padayatris,” thus making us feel very homely. He took great care of all the devotees. We padayatris got different services and are fortunate the Lord engaged us in those services.

Rasutsava dasa: I have completed eight years in the All-India Padayatra and am now serving in the Uttar Pradesh Padayatra. I prayed to Radharani, “Please give me seva of sadhus in parikrama for lifetime.” Then in istagosti it was announced that I will be in charge of the international group. Saddened, I went to Radharani in the Krishna-Balarama temple and prayed, “Mother, I don’t want to be incharge of that group. I just want to serve devotees and sadhus. Please help.” The next day it was announced that I would serve sannyasis. I jumped for joy and thanked Radharani. While on Govardhan Parikrama I was praying, “Oh Lord, please give me service of devotees and may I not commit any Vaishnava aparadha or hurt any devotee.” Whatever is your desire, in Vraja dhama knowingly or unknowingly the Lord fulfils,therefore we should be very careful that desire is only for spiritual benediction. In parikrama I was serving Radharaman Maharaja and other senior devotees. For twenty-four hours my mind was busy serving. I had no time to think anything else. I also got maha prasad of devotees who are kind-hearted and compassionate to other devotees. Thus, I had a great time serving in Vraja.

It was a wonderful experience being in Vraja dhama. When Radharaman Maharaja narrated katha, I felt as the pastime was occurring right in front of me and I was also part of the pastime. His kathas were nectarian. In Barsana after the Govardhana festival, fortunately I got maha prasadam of Sacinandana Maharaja and my spiritual master, Lokanath Maharaja.

From these three I got to honour maha mahaprasadam of pure devotees and I realised I was filled with special spiritual strength. For one month I got the fortune to serve Sri Sri Nitai-Gaurasundar who move all over India to deliver the fallen souls. 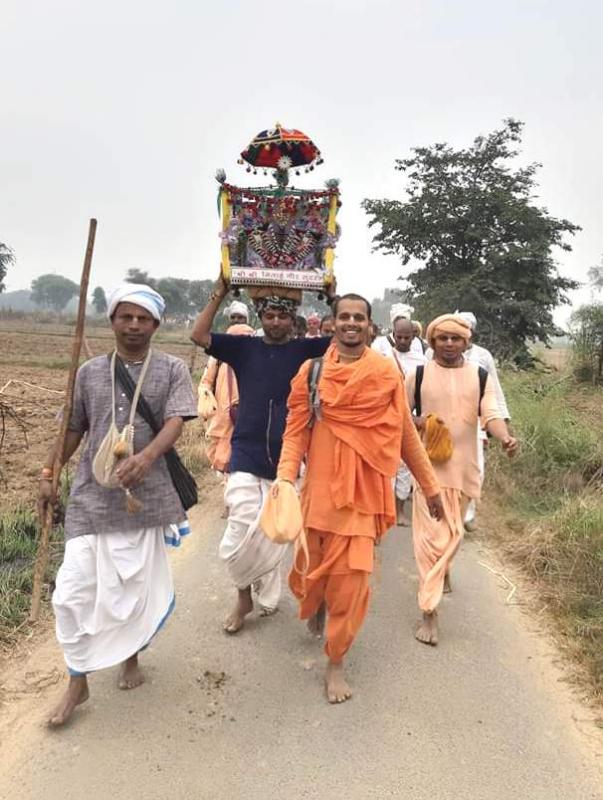