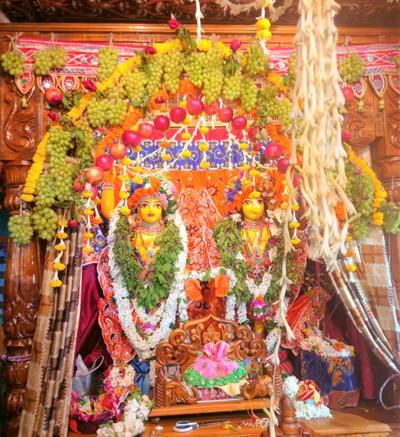 The Utkal-Banga Padayatra reached Sheragada village, a former market town in the Ganjam district of Odisha, a few days before Janmashtami, parking our chariot in front of the Jagannath temple.
The padayatris fasted on Janmashtami and during the day were busy with preparations of fifty-six bhoga and decorating the chariot with fruits and flowers. The previous day we had sankirtan in Sheragada and invited the residents for the two-day celebration of Janmashtami and Srila Prabhupada’s appearance day. On Janmashtami evening we began with sankirtan and were joined by several local people. At 10pm we did an abhishek of Their Lordships, to which the Jagannath temple pujaris and the village dignitaries had been invited, and following that we offered fifty-six bhoga. At midnight we had maha arati and maha sankirtan.
nanda ke ananda bhayo jai kanya lal ki
We then joined the 300-strong congregation honouring ekadasi prasadam. This was the first time a Janmashtami programme had been organized by Utkal Banga Padayatra in a village and the people were very much impressed with the sankirtan and abhishek. Our padayatra began in September 2021, so for us also this was our first Janmashtami. In Odisha people mainly worship Jagannath, but this year they were blessed to have Janmashtami celebrated in their temple.
The next day we celebrated Srila Prabhupada’s appearance day. This was totally new to the villagers but they were happy to know about our founder-acarya and the inspiration behind the ISKCON preaching movement. They were filled with respect and devotion for Prabhupada after hearing his glorification by the padayatris.
We had abhishek of Srila Prabhupada and then sang Vaishnava bhajans. We started distributing prasadam at 2pm and continued till the evening, and to our surprise about 3000 villagers honoured prasadam. News of the celebration had reached nearby villages and several people from those areas also attended the programme. Since padayatra came to their region every day has been a celebration for these villagers.
We did not have much donations. I was a little worried about how we would manage, but I had a desire that we should distribute lots of prasadam. By the mercy of Sri Sri Nitai-Gaurasundar everything was arranged – someone brought leaf plates and some brought grains and, like that, the Lord helped us. That’s a specialty of Sri Sri Nitai-Gaurasundar. They never let us down.
It was broadcast that it would rain heavily. It did rain in nearby villages, but by the Lord’s mercy there was no rain in Sheragada and we had a nice celebration without any obstacles. The next day it rained heavily, all by the Lord’s arrangement.
This is my first year as a padayatra leader and I have had a lot of anxieties. I celebrated all the festivals with the All India Padayatra when I was a pujari there, so it is all the mercy of Guru and Gauranga and the Vaishnavas, especially All India Padayatra leader Acarya dasa by whom I was trained.
Please bless me that I can serve nicely.