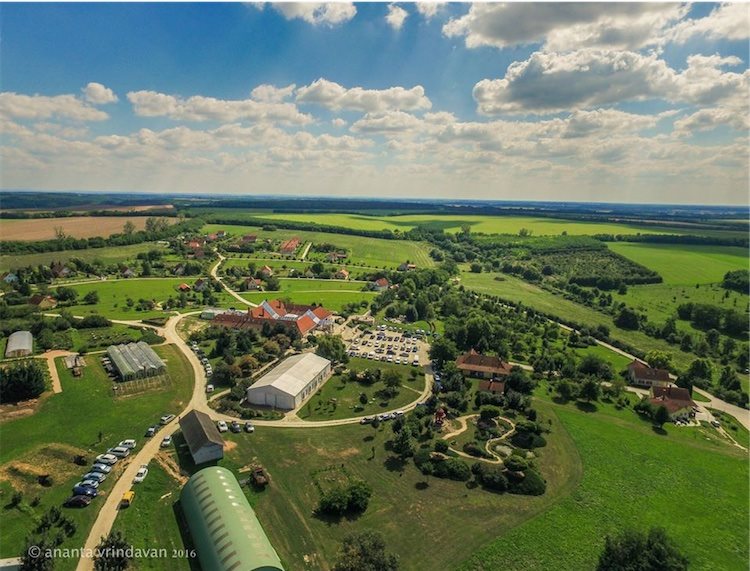 This is an article of appreciation and support to all our devotees who are working and maintaining our rural communities, producing food and taking care of the cows. Right now when we are living in a situation where, all the modern civilization is paralyzed and threatened for a very contagious disease and an impending economical chaos, all your services take a very special relevance. Srila Prabhupada already visualized this scenario and he spoke many times about it and bought many farms around the world so the devotees can live in. We can think that to buy farms and cows, was not a direct order of his Guru Maharaj, or from the Goswamis, however because of his immense goodness and mercy he was convinced, that it was a completely relevant aspect for Lord Caitanya Mahaprabhu Sankirtan Movement. He bought these farms to create a simple and natural way of life, self-sufficient and aimed toward self realization.

Like an expert doctor who seeing a patient with metastases know that he will soon die, Srila Prabhupada by seeing how the modern society have created so many slaughterhouses, so many cars and industries spoiling the atmosphere, paper money as an economic base, drugs, abortion… he knew the consequences of these activities, that by laws of nature there will be war, pestilence, famine and many other unwanted calamities. He also knew… that the devotees always have problems to live a rural life, far from the commodities of the cities, the jobs, the supermarkets… we are used to it. But he insisted and made his motto “simple living high thinking”. He said that finally many, many people would come to our farms. We appreciate so much the broad vision of these projects boost by Srila Prabhupada. So, many of his words were predictions of the future. Prabhu Gokularajana count:

Gokularanajana: With his cane Prabhupada pointed to the skyline and said, “You see this city? This city and all cities will collapse very soon. Do you know why?” Everyone hesitated, wondering, but Tamal Krishna quickly said, “Because the people here don’t know how to grow food.”… Prabhupada said, “Yes.” Growing food is the whole purpose of our farm communities and we still are trying to grasp their importance. (Gokularanajana Ch, 44)

So this artificial way of banking, that will be also collapsed. [Conversation, January 1977]

The social body of the modern civilization has shown its illness in the form of this pandemic which has stopped all of humanity. Devotees are also affected because all our preaching activities like Harinams, restaurants, Sankirtan, etc have had to stop. Literally, at least in relation with the public, the Sankirtan Movement is forced to stop. But Prabhupada assured us that nothing will stop this Movement. Then? Why does it happens? For the materialistic people it is a big disaster and danger, but for the Lord´s devotee, although it´s the same danger, he knows that it is also a situation to improve his service. First personally, to look inside and think which lesson we have to learn from this and examine our services. And also as a community, cooperate and be closer together than ever to improve our Krishna conscious management. Sri Caitanya Mahaprabhu is Krishna Himself, He is Acyuta, Infallible. His Sankirtan Movement is always victorious, param vijayate sri-krsna-sankirtanam. Lord Caitanya is the most magnanimous form of the Lord, namo maha-vadanyaya… In this age His only weapons are His devotees, confidential companions and the Holy Name, säìgopäìgästra-pärñadam yajïaiù saìkértana So we can be sure that all Sankirtan Movement´s activities will recover very soon. Prabhupada says:

But we must learn to tolerate all the difficulties and push on regardless of whatever obstacles we may be presented with. No one can stop this Krishna Consciousness Movement because Lord Caitanya wants that His Holy Names will be spread to every village and town.

Srila Prabhupada always gives a lot of importance, to the cows and food production in our farms. Curiously we see in the actual world crisis that in all big cities like New York, London, or Paris, the fashion shop, jewelleries, car companies like Mercedes, Audi, everything is close.The big and famous airports and train station practically also close. But which only shops are open all around? Only food stores.

There are many professions, according to the different qualities and karma of the people like teachers, administrators, lawyers, engineers, but all profession depend on food. What profession Srila Prabhupada call a gift from God?:

Therefore God’s gifted professions for mankind are agriculture and cow protection. Agriculture is the noblest profession. It makes society happy, wealthy, healthy, honest, and spiritually advanced for a better life after death. (Ligth of the Bhagavata. Vs. 9)

Even in ancient time, in Rome, the great philosopher Cicerone said: “The Agriculture is the proper profession of the sage, the most suitable for the simple person, and the most worthy occupation for all free man”.

Srila Prabhupada did not agree with the approach of what the humanity called “progress” When he saw the great industrial development and the false banking economy, he say: “Factory means destruction. And agriculture means construction” sohe insisted on applying a natural and ecological life in his Movement:

Prabhupada: Actually if you possess land and cows, the Government can fail or not, but your real value is there. That is real property. The basic principle of economy is centered around the land and cows.

We hear that the main problem for the devotees to stay in the farms are that they don´t have a job that would produce a basic economy to pay their bills. However there are many works in relation with the land, food production and cows, which can be develop and you can make profit. One way is to organize a producer’s team that in addition to planting organic products, also have local mills, eco manufactures and cow products. Secondly to have another group who can sell the products, open shops, restaurants, supply to eco stores, etc These are all sustainable jobs and in harmony with nature. Soon there will be many devotees would like to join the farm communities, therefore all possible arrangements must be made.

Mainly after the departure of Prabhupada the devotees were taught to do Sankirtana and to those with more tendency to vaisya to also sell paintings and others products from India and eastern countries. In the beginning to buy and maintain the Temples, but later it became the only profession to maintain their families, practically to this day. Now in this crisis we have the opportunity, for the new generation of devotees with Vaisya´s nature, are trained as true Vaisyas, just as the Bhagavad-gita teaches:

Prabhupada: Therefore our, as recommended in the Bhagavad-gétä; kåñi-go-rakñya-väëijyam [Bg. 18.44] People… A class of men should be trained up for agriculture, producing food grain, and cow protection.

Actually, this machine civilization is shocked and wobbles because it has no real scientific basis for harmony with the earth, neither with human beings, nor with the Divine laws of nature.

Srila Prabhupada was clear, about the true life system for his devotees and humanity in general, so they can get the maximum benefit of this human form of life. Now in this forced confinement, is a good opportunity to meditate, pray, and surrender more our life to Krishna, so we can get better understanding of Srila Prabhupäda instruction for all of us and his Movement.