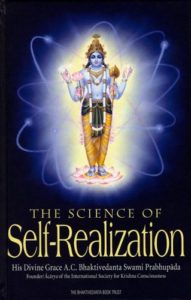 I’ve been in Germany for a few weeks visiting my family and was trying to sell some books this past week while I had some time off from family visits. In the town where I was, it seemed to be quite difficult to distribute a lot of books to the many hard-wired Germans. A lot of people didn’t speak much German or English, and many other fundraisers besides me were also on the streets. So I was meditating on something Devamrita Swami told me once — I should just think, “I could meet one person whose life could be completely changed by our encounter.”

One day seemed particularly challenging. I met a young man who just finished school and told me that he started meditating a few weeks ago. He seemed very sincere and ended up taking a German “Science of Self-Realization” before walking off. Ten minutes later at a different spot, he came up to me again, and we started talking. I remembered that I was going to meet one devotee the upcoming weekend for lunch and kirtan, so I told the boy that he could come along if he wanted. He was very excited about the invite and really wanted to come.

Surprisingly, myself being used to the noncommittal Kiwi mood, he ended up coming. Together we took up an hour’s drive to the devotee, and we had a very nice day taking prasadam and chanting Hare Krishna with some wonderful devotees. After being away from the devotees for a while and not selling books, I was thinking that there’s definitely nothing so enlivening as giving Krishna to others.

Tags: sankirtan
E-mail me when people leave their comments –
Follow