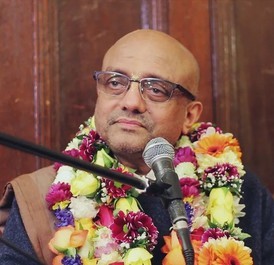 My humble obeisances to you. All glories to Srila Prabhupada, the Founder Acarya of Bhaktivedanta Manor.

An interviewer asked Srila Prabhupada: How would I recognize a true follower of the Krsna consciousness movement by his behavior? What would his outward expressions be?
Srila Prabhupada: He’d be a very perfect gentleman, that’s all. You could not find any fault in him.

Srutidharma Prabhu, You are that perfect gentleman!

•Tolerant and patient and never got angry with anyone •Always encouraged and glorified others’ work •Always showed care for others no matter how busy you were •A wonderful leader, who lead by example

Now we will never be able to thank you for all that you have done for this outstanding and very dear project of Srila Prabhupada. You served the Manor with all your heart and strength and served Srila Prabhupada’s mission tirelessly. Your whole life was dedicated to Prabhupada’s service. You served as a key member in the campaign to save the Bhaktivedanta Manor Temple from closure and were the backbone of the Bhaktivedanta Manor Foundation fund collection for the Sri Krishna Haveli.

When my disciple, Sri Hari Prabhu departed, you not only expressed your care and concern but actively interacted with the family throughout that crucial period in their lives. I’m sure there was no shortage of such exchanges. Because this is Srutidharma!

I remember watching a drama in which you embodied the role of Srila Prabhupada. Your words and mannerisms reminded me so dearly of Prabhupada.

Srila Prabhupada would say: ‘Just act in such a way that God will see you.’ And that’s Srutidharma! The Temple Deities came to see and take you home with Them.