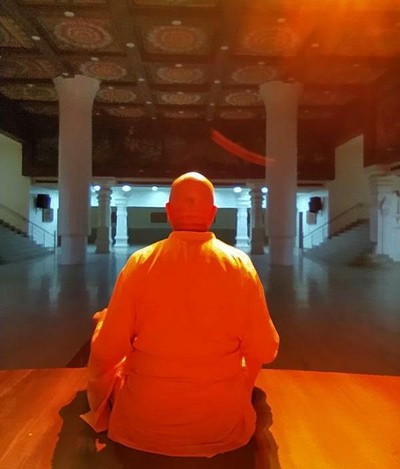 It was a typical October day, I mean to say, perfect for walking. The wind, a cloud and the sun were above and around, not only me but everyone. I was walking west on Dupont and at one crossroad, at Davenport, also known as the Ancient Trail used by the Huron for centuries, I met one road worker. His name is Jordan, he left his tools and came down.

“Hare Krishna!” said Jordan. “We’ve met. I know Phil, who is in Hungary now at the farm community… I do chant and follow some of your classes on Zoom.” We carried on the conversation and he then resumed working and I walking.

That was a pleasurable encounter. Further on I met a God-sibling, Lila Kirtan. I knew his walk. I was behind him as he was walking to Christie Pitts. I wasn’t 100% sure it was him until he sat at a park bench situated at the edge of the parks elevation. I glanced at his front, his face, and I knew it was him. He was surprised.

To see him was the reason that I came to the area of his basement apartment in the first place. I managed to see him walking after he left his place. My purpose for the visit? To interview him for a book, “Krishna in the Maple Leaf” which will explore the fun and challenges of the pioneers of our movement in Canada.

Our interview was done in just over an hour. We looked over the area of the Pitts. A red-tailed hawk was perched on the fence bordering the baseball field. Two squirrels were stilled by his presence, one being very small in size. Would there be a drama? Perhaps, a predator’s drama? The hawk’s mate was soaring above. This drama may get even more intense. We couldn’t stay for the show, should it even get off the ground. I believe, at one time, I was a squirrel and I had to be cautious for my life.