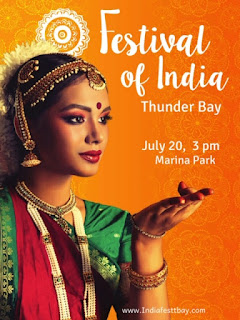 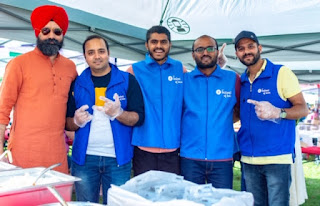 As has been observed many times before, when I move about in devotional attire, I get noticed.  After a swim in Lake Boulevard, I had changed into a dhoti and kurta, when a cyclist slowed down and asked, "Hare Krishna?"
"Yeah, and I guess you'll be there for the Festival of India tomorrow?"
"Yes, sir!" he responded, and then picked up speed, off to his own destination.
At the harbourfront, the boys and I, in the midst of air-gliding seagulls, had just completed a kirtan/chanting session on the grass, when a Sikh gentleman ambled along behind a walker.  He recognized us for our Indian garb, especially the more orthodox among us, Ananda, Gaura and I.  He stopped and with a smile expressed, "I'm coming tomorrow."
While crossing the parking lot, a fellow in a pick-up truck suddenly halted and climbed out of the cab.  "I'm Brian. I know somewhat about this.  I've been to Nepal."  He then reached into his bag to pull out a book, The Topmost Yoga, by Prabhupada.  A young father, he told us he's got the kids tomorrow and that they'll be at the fest.
And when we came out of Shopper's Drug Mart, a fellow in a black sports car rolled down his window as the rains began to descend.  He saw Ananda in his white dhoti and kurta,and me in ‘swami’ clothes and instantly connected us to the Indian event.  "I'm coming.  It starts at 3:00 p.m.?"
"Yes it does."  So we have another commitment.
We advertise merely on the strength of the clothes we wear.
https://www.facebook.com/Festivalofindia.Thunderbay/videos/350661255859498?s=100001647982652&v=e&sfns=mo
https://www.facebook.com/Festivalofindia.Thunderbay/videos/425934938254443?s=100001647982652&v=e&sfns=mo 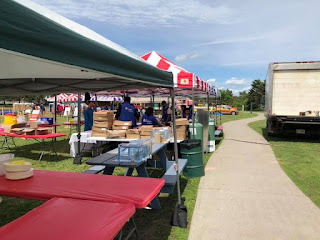 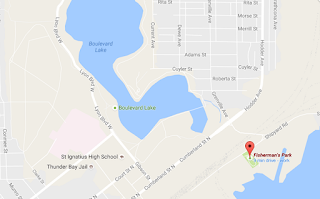 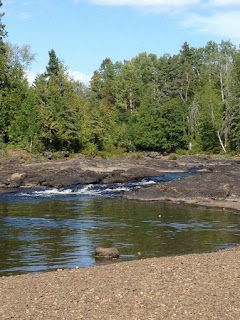