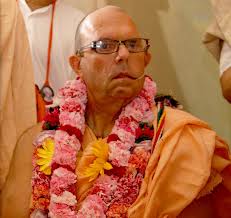 One day it was Govardhana Puja and we built a big mountain of rice and fed many people. The people took their leaf plates after taking prasadam, and threw them behind the building. Prabhupada was living up on the second floor, and we were sitting in the room together. He heard dogs barking and kids shouting so he got up and walked back on the veranda behind his room. Looking over, he saw that there was this big pile of discarded leaf plates and there were little scraps of food on the plates. Some very poor children with sticks in their hands were fighting off hungry dogs, trying to get the scraps of food. When Prabhupada saw how these children were so hungry that they had to eat the things people threw away and how they were fighting with the dogs to get these scraps of food, tears swelled in his eyes and he said, “We have to see that nobody goes hungry within a ten mile radius. The temple is the house of God. God is everyone’s father, Krishna is everyone’s father. So in the presence of the father, the son doesn’t go hungry. So we have to make an arrangement that people get fed.” And so that was the inspiration for regular prasadam distribution. (Following Srila Prabhupada. Transcript.) 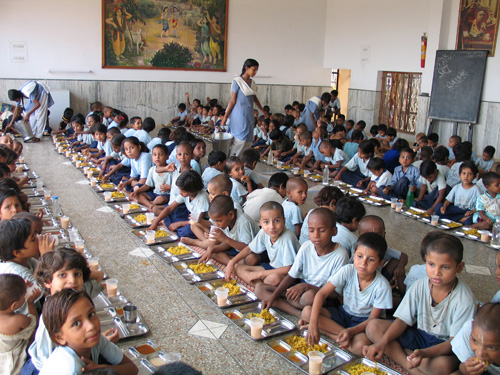