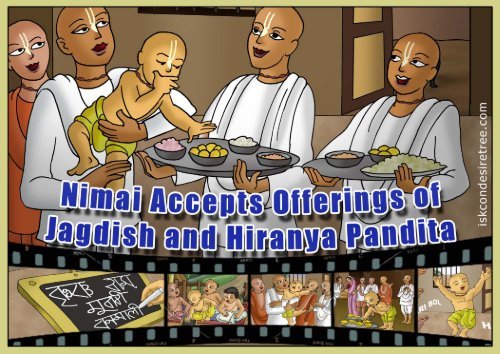 If Nimai could not catch a bird He saw flying in the sky He would weep bitterly and roll in the dust. Sometimes, He cried for the moon and the stars in the sky while thrashing His arms and legs violently, if He could not have them. At such times, everyone would try to pacify the child. Vishvarupa (the elder brother of Nimai) would take Nimai in His arms, but still, the child refused to be pacified. “Give! Give!” He would cry. Indeed, the only remedy was chanting of the Holy Names of the Lord. When everyone would clap their hands and chant, “HARI! HARI!” – only then would Nimai forget His distress and become calm. The frequent chanting of the Holy Names of the Lord, for the pleasure of Nimai, transformed Jagannatha Mishra’s house into the transcendental abode, Vaikuntha.

One day, however, the Lord continued to cry, in spite of chanting of the Holy Name of the Lord. Someone said, “My dear Nimai, come and dance. We are singing Lord Hari’s name.” But, Nimai continued crying. Someone else said, “Dear child. Tell us what You want. We will bring You whatever it is that you desire. Please stop crying.”

The Lord replied, “If you want to save My life, quickly go to the houses of the two brahmanas – Jagadisha Pandita and Hiranya Pandita. I am very attracted to the homes of these two pure devotees, and I can eat their offerings, I will become healthy, calm and well-behaved.”

Nimai’s request seemed unreasonable, because what He desired was not sanctioned by shastra nor practiced as a social custom. Because of this, Mother Sachi felt distressed. Still, the others smiled at the Lord’s childish words and promised, “We will give You whatever You want. Now, please stop crying.”

Jagadisha Pandita and Hiranya Pandita were topmost devotees of Lord Sri Krishna and inseparable friends of Jagannatha Mishra. When they heard of Nimai’s request, they become filled with joy. The two brahmana Vaishnavas said, “This is very extraordinary. We have never before seen such an intelligent child. How could He know today is Ekadashi, so that such a large variety of food has been offered to the Lord? We are convinced that the child’s exquisite beauty is caused by Lord Gopala Krishna residing within this boy’s heart and is causing Him to act in various astonishing ways. That is our belief.”

Thiking in this way, the two devotees decided to give all of the offerings to Nimai. Thus, they took everything to Jagannatha Mishra’s house in great haste. Upon arriving, Jagadisha and Hiranya Pandita said, “My dear Nimai, please eat all of these offerings that we had made for the Lord. Our desire to satisfy Lord Krishna will thus be fulfilled.”

Only by the mercy of Lord Krishna can one possess the spiritual intelligence to perform devotional service. Other than the Lord’s servant, no one can possess such intelligence. The Lord’s eternal servants, Jagadisha and Hiranya Pandita, saw to their full satisfaction how the Supreme Lord, playing as brahmana child, performed His playful pastimes.

The Lord happily received from His devotees all of their offerings and He tasted a little from every preparation. Smiling with pleasure, Lord Nimai ate Krishna’s offerings and all of His confidential desires were thus appeased. Everyone present sang, “HARI! HARI!” as the Lord ate and danced to the chanting of His own name. In the process, Nimai dropped some of the food on the floor and smeared some over the bodies of His family members. In this way, the Supreme Lord of the universe, the controller of the three-fold miseries of material existence, performed His transcendental pastimes in Navadvipa-Mayapur.