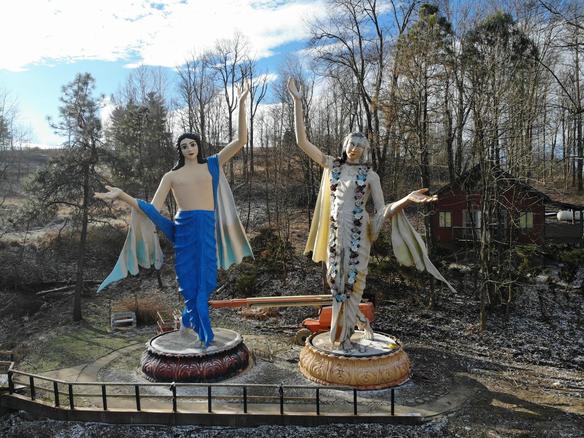 New Vrindaban’s outdoor Gaura Nitai deities are being carefully restored thanks to our generous donors
Restoration of the prominent and iconic Gaura Nitai deities began at New Vrindaban in the spring of 2022, led by Balaramshakti das and others. In October, Rukmavati devi dasi took over the project, starting with a surgical pressure washing to clean their surfaces and continue the painstaking process of removing old paint.
The giant deities were designed and created by a team of devotees, including Soma das, in the mid-1980s. “The forms were created by shaping and welding rebar,” said Soma das. “They were then covered in metal lathe and polymer cement and filled with lightweight cement, sand, and purolite. Originally, the deities were not painted, but pigment was added to the cement.” It took an entire year to create each form which was later painted with elastomer (an elastic polymer) mixed with color. The whole project was completed in 1985.
Over the years since their creation, additional layers of paint were added, which has taken months of careful removal. “Paint in some problem areas was about 3/4” thick which caused water to be trapped inside and damaged the masonry,” said project manager Rukmavati. “Nityananda’s face and body have been mostly repaired. However, some detailing work and repairs still need to be completed on the feet and front of the dhoti. Due to the cold winter and rain, the work has significantly slowed down.”
In early January, Lord Nityananda’s form was painted with white primer, and as of last week, He received the first coat of color. Rukmavat continued, “This week, I plan to remove the garland from Lord Caitanya and start work on repairing and painting the garland flowers of both deities during the cold season.” Other New Vrindaban devotees will be helping her to paint the fiberglass garlands before work on the deities begins again this spring. The target date for the project to be completed is June 2023.
This vital restoration project will ensure these historic images of our Lords will be appreciated for years to come and is made possible by the mercy of HH Giriraj Swami, HH Gopala Krishna Goswami, and HG Kalakantha Das.