Japan’s new ISKCON temple, opened in Funabori, Edogawa, Tokyo this summer, has gone from strength to strength since and proven to be an inspirational hub for its congregation.

The temple, dubbed “ISKCON New Gaya” after the Indian pilgrimage and site of many of Sri Chaitanya Mahaprabhu’s pastimes, opened its doors to the public with a two-day festival back on July 2nd and 3rd, as did a new pure vegetarian Govinda’s restaurant and a Vedic Culture Center.

Around 1,500 people from cities across Japan such as Osaka, Kofu, and Nagoya attended over the two days, including ISKCON Japan Governing Body Comissioner Bhanu Swami and Indian Ambassador to Japan Mr. Alok Prasad. Leading guests to its decorated front entrance, a “green carpet” stretched around the three-storey temple, which cost 200 million Japanese Yen and is located in a largely Hindu Tokyo suburb that is easily accessibly by train from downtown Tokyo.

Devotees celebrated the opening of the new temple with a drama performance by children of the Vedic Culture School, an installation ceremony and abhisekha for the brand new Deities of Sri Sri Radha Govinda and long-worshipped Sri Sri Nita-Gaurasundara, and a presentation by Bhanu Swami. There was also a speech by the Indian Ambassador, plenty of enthusiastic kirtan, and a sumptuous feast. 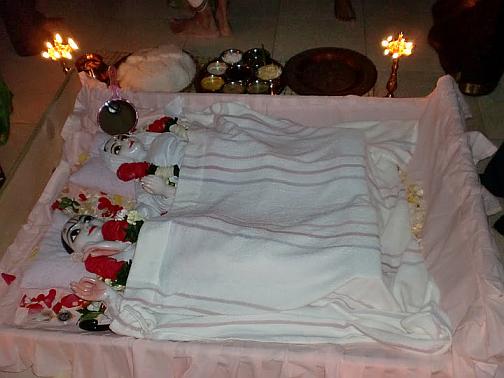 The Deities of Sri-Sri Radha-Govinda rest before being installed

It’s a new start for ISKCON Tokyo, which has been through a lot since it was first established in late 1969 by Sudama Dasa and Balimardana Dasa from the USA.

“The first temple in Tokyo was a one-story Japanese-style house in a densely populated part of central Tokyo named Shibuya,” recalls Satyadeva Dasa, an early Prabhupada disciple who is originally from San Francisco but joined ISKCON in Tokyo in August 1970. “It had three small tatami rooms tatami is a type of traditional Japanese flooring made with rice straw—with a bathroom and kitchen.”

As was often the case with the early ISKCON missionaries, Balimardana soon left Japan to open other temples in Hong Kong and Australia. Seeing Sudama struggling alone, Srila Prabhupada sent Bhurijana, Amogha, Satyavrata and Chintamani to assist him, and even visited himself on the occasion of Janmastami in 1970 to inspire the devotees and to finalize the printing of his books with the Dai Nippon printing company. “Prabhupada, who was on his way to start ISKCON in India with Tamal Krishna Maharaja, Madhudvisa and others, stayed in a rented apartment one train stop away in the famous Harajuku area of Tokyo,” Satyadeva says. “This was near the gorgeous Meji Shrine, dedicated to Emperor Meji, who lived during the time of the American Civil War and was the last Emperor with actual governing powers in post modern Japan. The Shrine is set in a vast garden, which Srila Prabhupada often took morning walks in.”

Unfortunately, soon after Srila Prabhupada left for India, the Shibuya temple’s staff dissipated to different parts of the world, once again leaving Sudama to fend for himself. Unable to cover the rent, he was forced to move to a location in Hachioji, which was cheaper, but significantly further from the center of Tokyo. There, he struggled alone to keep the temple going for another year until Srila Prabhupada again sent devotees from America to help him.

ISKCON Tokyo went through other trials in the early years closing down completely from 1975 to 1980, when its presiding Deities of Sri Sri Nitai-Gaurasundara were moved to Los Angeles but in 1980, it was re-established and has since continued to this day. 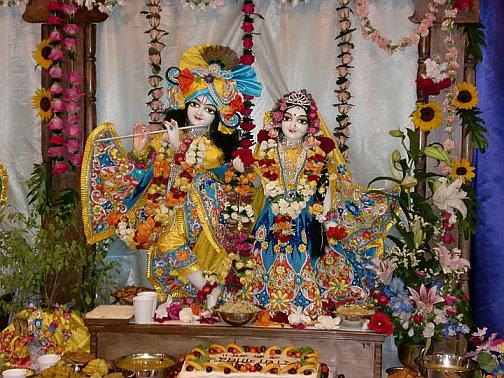 Sri-Sri Radha-Govinda on Their new altar

“The most recent temple in the Nakano area ran for over fifteen years, and became one of the top five small temples in book distribution throughout ISKCON,” says current Tokyo temple president Sanjay Krishnachandra Dasa. “Four of the top book distributors were Japanese, while many books, such as the Bhagavad-gita, Krishna Book, Nectar of Devotion, Sri Isopanishad and Srimad Bhagavatam First Canto Part One were translated into Japanese. That progress continues with the BBT Japan recently being officially established as a legal entity.”

With this success, the devotees decided it was time to move into a new temple. The Nakano property was in disrepair, it was located next to a graveyard—which was considered inauspicious in Japanese culture—and like all other previous Tokyo temples, it was rented. Having its own land and building would give ISKCON official charity status in Japan, while a more official presence would draw more respect from the local community. The devotees also planned to install Radha Krishna Deities, which would be sure to attract more guests. Distributing books at a fair in Tokyo

And so in 2001, the devotees began to work together towards their ambitious common goal, mobilizing funds, arranging bank loans, and pooling resources. An extensive property search began, which at first seemed hopeless nothing could be found that wasn’t either too expensive or inconveniently located.

“After a three-year search, we all surrendered to Krishna’s will, and thought, ‘Let us compromise and buy whatever property comes along, even if it is not ideal,” says Sanjay Krishnachandra. “That very day, the Lord led us to a perfect property in Edogawa, where most of our ISKCON congregational members live, and where property is much cheaper than in Central Tokyo.”

Devotees moved into the new temple, and a grand opening was finally scheduled for mid April 2011. But just then, disaster struck.

On March 11th, a 9.0 magnitude earthquake struck 81 miles off the coast of Japan, the most powerful known quake ever to hit the country. Triggering 133-foot-high tsunami waves, it killed nearly 16,000 people and damaged or destroyed over 125,000 buildings.

In Tokyo, more inland, the damage was less extensive, but nevertheless noteable. A ten-foot-high tsunami struck, shocks reached 6.0 on the Richter scale, buildings shook, and the nearby Fukushima I Nuclear Power Plant sustained a Level 7 meltdown. Fortunately, no devotees were hurt, the new Tokyo temple sustained only minor cracks, and the Deities of Nitai-Gaurasundara were only displaced, not damaged.

Nevertheless, manpower at the temple was drastically diminished as many devotees fled the country in fear of nuclear radiation. 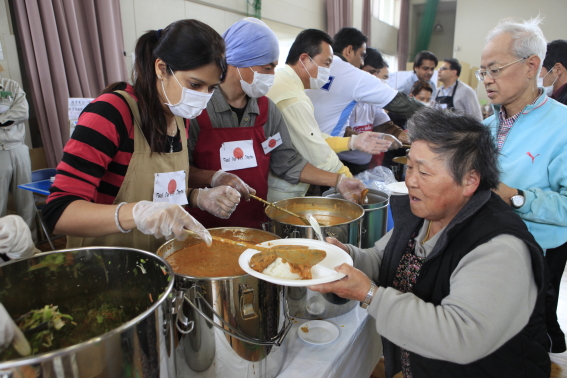 Food For Life feeds refugees of the March 2011 Tohoku earthquake

“Two Japanese devotees, Kirtanisvara and Mahatma Prabhus, however, bravely continued on with their priestly services to Sri-Sri Nitai Gaurasundara, without flinching in the least,” says Satyadeva Dasa. “Their dedication and fearless determination has become an inspiration to all the Tokyo devotees, both Indian and Japanese alike.”

Meanwhile, others took the opportunity to help their fellow man. Devotees provided prasadam and shelter at the temple to around fifty Nepali nationals, who had fled from the badly hit city of Sendai, where they had been studying Japanese at the university. The selfless effort drew a grateful call from the Nepali Ambassador.

Within two months, ISKCON Tokyo was bustling again, and preparations were back in place to open the new temple, which was officially inaugurated on July 2nd and 3rd.

“ISKCON New Gaya is a great facility, with much potential for various kinds of outreach programs,” says Satyadeva. “The top floor of the three-story building is an ashram for resident devotees. The second floor houses the Vedic Cultural Center, used for various outreach programs oriented towards the needs of both Indian and Japanese congregations. And on the first floor is the temple room, which can comfortably accommodate fifty to seventy people and is home to Srila Prabhupada, Sri-Sri Nitai-Gaurasundara, and the newly installed Sri-Sri Radha Govinda. I might also add that it is no small task to have found a building in densely populated Tokyo where kirtan can be performed without disturbing the neighbors.” The temple complex also includes a Govinda’s restaurant, which aims to promote social well-being through sanctified cuisine that satisfies body, mind and soul, and which has garnered much praise from the local Japanese community.

Meanwhile, Food For Life has been serving around 6,200 opulent lunches and more than 6,000 kilograms of fresh fruits and vegetables to disadvantaged people every Sunday. It also sponsors 1,000 fresh hot meals every day to financially challenged school children in Mumbai, India.

Devotees and congregation members are also well taken care of, with daily temple services, weekly ‘satsang’ gatherings, exciting festivals, and education for their children at the Vedic Culture School.

“In the future we hope to increase book distribution, outreach programs, and the active engagement of our congregation,” says Sanjay Krishnachandra Dasa. “This new temple is closer to the Indian devotee members, and has much greater potential to serve the Japanese congregation, which has historically been rather small. All in all, this institution is designed to attract a wide variety of people depending on their interests, and to be truly international with a specific flavor to serve the Japanese people.”