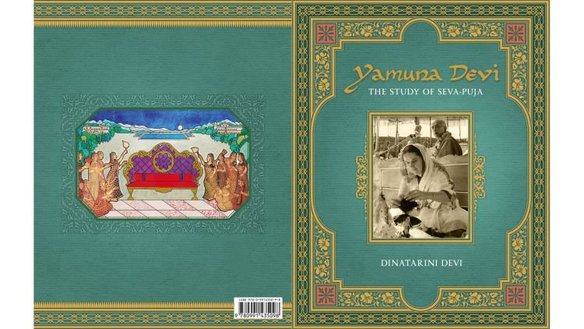 The long-awaited new book, “Yamuna Devi: The Study of Seva-Puja,” is here. The work presents and expands upon the original “Deity Book,” a parchment-paged binder about deity worship and dress which Yamuna Devi, a much-loved ISKCON pioneer, and early Prabhupada disciple, created and brought with her to each ashram she resided in.

Guests frequently asked her to publish the book, and now, nine years after her passing, Dinatarini Devi, her companion in devotional life for 37 years, has compiled Yamuna’s work along with fascinating historical details about her studies in deity worship.

According to the book, Srila Prabhupada began instructing Yamuna in the rudiments of Deity worship, or seva-puja, in 1969 at John Lennon’s Tittenhurst Manor in England. Using his own six-inch Radha Krishna deities, Prabhupada taught her how to bathe, dress, and decorate Them, and how to perform arati. He continued to train her while she traveled with him in India, and in 1971, she began worshiping her first small deities.

In 1972, when Yamuna was given the service of preparing for the deity seva at ISKCON’s upcoming Krishna Balaram Mandir in Vrindavan, Srila Prabhupada asked her to study deity worship standards, dress, and procedures of the Goswami temples in Vrindavan.

She began with Sri Radha Raman Mandir, which Prabhupada had specifically requested her to study due to the excellence and historical consistency of its deity seva standards. Srila Prabhupada had a warm relationship with Radha Ramana sevaite Vishvambhar Goswami who, along with Hari Charan Goswami, Padmanabha Goswami and others, welcomed Yamuna with open arms and gave her access to their schedule of worship, shringar (dress), cooking, bhoga offerings, festivals, and special darshans.

Yamuna took copious and detailed notes and drew illustrations of the deity dresses and ornaments, both at Radha Raman Mandir and the many other temples she studied at in Vrindavan and beyond.