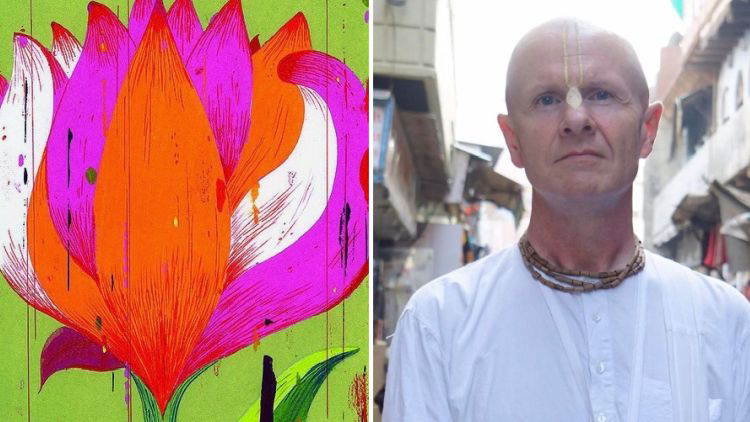 Evoking a deeply affecting mixture of regret and hope, Gopagana Dasa’s new album “A Surge of Bhakti to the Heart” might be the perfect soundtrack to these difficult times for humanity.

Recorded in Vrindavana, India in early 2020 before the COVID-19 pandemic hit, Gopagana produced the album with minimal equipment, programming all the instruments by himself on Garageband.

“I’m in the vanaprastha stage of life now, and my situation is more simple,” he says. “The kirtans I’m recording are like my bhajanas, my personal offerings to Krishna. I hope that they inspire some soul out there.”

In some respects, Gopagana’s previous release – 2015’s Sixth Rainfall  – was a very different endeavor to his current one. Created when he had more funds and facilities, it featured traditional instruments, and was recorded live with a large group of friends, and many musicians from around the world.

The creative DNA of A Surge of Bhakti to the Heart remains the same, however – in its own way it’s just as unique and artistic. Sixth Rainfall was an epic eight-hour boxset with Gopagana’s own original maha-mantra melodies. “A Surge…,” meanwhile, comprises thirteen Hare Krishna maha-mantra tunes ranging in length from 3 to 20 minutes, and blending every genre under the sun.

“In my youth, my friends and I would joke about the titles of different musical genres – like ‘bleak industrial music’ or ‘psychedelic ethereal funk,’” Gopagana says to give us an idea of the album’s eclecticism.

He also lists some of the diverse sources he drew inspiration from: “In the devotee community, I’m inspired by the energetic kirtans of Tribhuvanath Prabhu. The track ‘Kartik’ is an ode to the classic, calm kirtans of Madhava Prabhu, Badahari Prabhu and Sarvatma Prabhu, who are all dear to me. Other inspirations are video game soundtracks, world music, spontaneous jazz, American country music, and the B-sides of 7” European pop singles.”

Tags: new album, a surge of bhakti to the heart
E-mail me when people leave their comments –
Follow