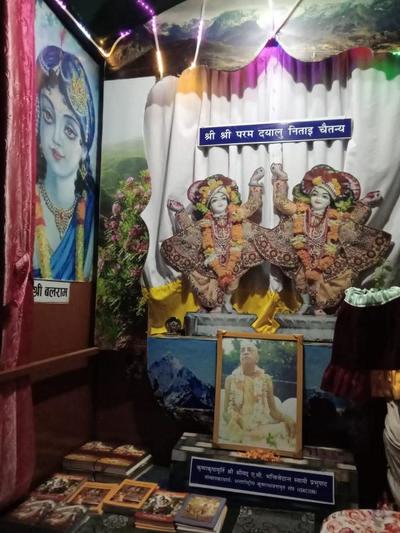 The Nepal Padayatra restarted in the Jhapa district in southeast Nepal on November 17, 2022, following a gap of two months while the padayatris went on Vraja-mandala Parikrama.

Our first stop was at Kerkha village near the Kamala River. A family in the village welcomed us and arranged for our accommodation and prasadam at a Shiva temple. We performed nagar sankirtan in Kerkha and had a house programme at the family’s residence. The next day as we were moving ahead the family members offered garlands to Their Lordships and Srila Prabhupada.

Our next destination was Dharampur village, having been invited there by an elderly couple we met on the road. They were amazed to see young boys doing sankirtan and taking spirituality seriously and were very happy to have darshan of Their Lordships. The pair organized a big house programme at their home which was attended by several villagers. After the programme they served a sumptuous feast to all those assembled.

We then moved on towards Yalambar where we stayed for one day and performed nagar sankirtan. A kind family there helped us and joined us in sankirtan. The next day we made for the Charpane business centre in Birtamod Municipality where we were also invited by a family and a house programme was organized. We then went to Birtamod itself and presented katha at a Kali temple and performed sankirtan in the evening.

We have many experiences on the road as people come near the chariot and ask for books and prasadam. Nowadays we have increased our dry prasadam distribution and there is much scope for preaching in this area. We are only two padayatris; so we have limitations. If we had a larger team we would have done more, nonetheless we will go on for the pleasure of Guru and Gauranga. I always think how fortunate are those people who come in contact with the Lord in the form of deities on the padayatra chariot, books by Srila Prabhupada, sankirtan, the Hare Krishna maha mantra and devotees. They are connecting with padayatra and progressing in their devotional lives.

All this is by the mercy of Srila Prabhupada and my spiritual master, Lokanath Swami, who inspired me to start padayatra for the purpose of preaching and distributing books.