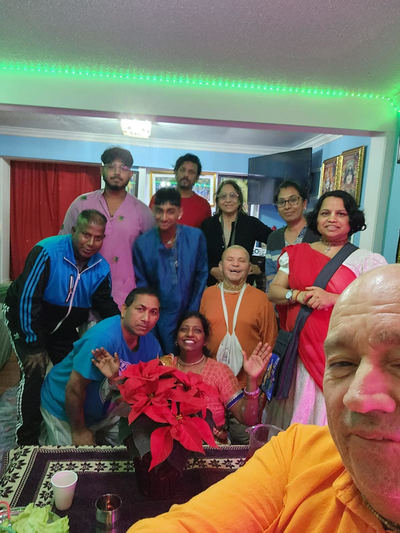 Things are moving along with the recording of the audiobook for The Saffron Path. I have completed forty-three chapters and I am well into walking the United States to reach the Elm tree at Tompkins Square, Park, NY. It’s fun going through the book’s content again. It feels like I’m on the road again. Nice to see some people purchasing the book as a Christmas gift.

Being stuck in a tight studio for the recording restricts the opportunity to mobilize the body. And on top of that, there are obligations to visiting my congregants. One of those visitations are from Rupa Raghunatha and Vraja, from Surrey, whose 19-year-old daughter Prem, was killed in an accident by a motorist. It is the one-year anniversary of this mishap, and so a memorial kirtan was held.

From this location, my trusty driver, extraordinaire, Jaya Govinda, dropped me off at the home of Satyabhama, who always cooks up a storm. It is a Fijian/Mauritian crowd. One of the teens there, Arjuna, recently received his drivers license, and already has secured a Mustang for getting around. He is a bit of a jester, and just can’t be serious. He does love Krishna though, and that is a saving grace for a young lad.

I read to the group, “The Oldest Song,” a poetic abbreviated version of the Gita. My day ended on that note – the Gita, and with its message of sweet surrender.