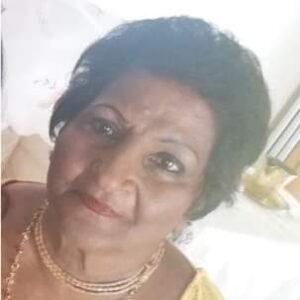 I met Mother Balai through my sister Padyavali, who lived in Kinross in the Eastern Transvaal. Whenever I visited Kinross I would do as much sankirtana as possible, and soon, through the effort of the devotees, a nama-hatta was established.

Padyavali regularly brought prasadam for Mother Balai and her family, and soon Balai; her good husband, Lenny; and her children, Shamenderan and Priyenderan, took up the process of Krishna consciousness.

Mother Balai and the devotees, including two devotees from nearby towns, Their Graces Raghunath Prabhu and Uddhava Prabhus, started a regular Food for Life (FFL) program.

Mother Balai was an excellent cook, and she and her team used to prepare nutritious meals and distribute them enthusiastically while a group of devotees performed kirtan.

Mother Balai met His Holiness Giriraj Swami Maharaja at the Hillbrow temple and later accepted him as her spiritual master. He described her as a very dynamic devotee. She became very attached to Maharaja, and he became her life and soul. Once, she was alone in Kinross and was very frightened. She took shelter of chanting the holy names, but she was still frightened. She then was inspired from within by Guru Maharaja and started chanting Guru Maharaja’s pranama-mantra and focusing on his picture. She soon overcame her fear, and after that she always took greater shelter of Guru Maharaja and the holy names, and her faith increased more and more.

She loved Srila Prabhupada and wanted to do more and more service. Their Holinesses Krishna das Swami, Partha Sarathi Das Goswami, and Giriraj Maharaja stayed at her home when they came for big preaching programs in Kinross. She served them and all the sankirtana devotees with heart and soul.

She was very kindhearted. She had a helper who had a five-year-old son who had AIDS. Mother Balai taught him to chant, and he became very attached to her and the devotees. He enthusiastically took part in all the spiritual activities and received special mercy from the maharajas. Mother Balai took care of him until he left his body at a young age.

When she came, with her devotee friend Shakila, on a pilgrimage to India with His Holiness Bhakti Caitanya Swami, she was so blissful visiting the holy places. She and her friend went out collecting Vraja raja (dust) in the early hours of the morning they were leaving for South Africa.

Until recently, Mother Balai served in the restaurant in Gauteng. She always was very eager to serve in any way she could.

I thank Mother Balai for taking such loving care of us during our sankirtana activities in Kinross. I will miss her sweet, loving association.

Mother Balai, please forgive me for any offenses. I am praying for your auspicious onward spiritual journey and offer my sincere, deep, heartfelt condolences to your family.