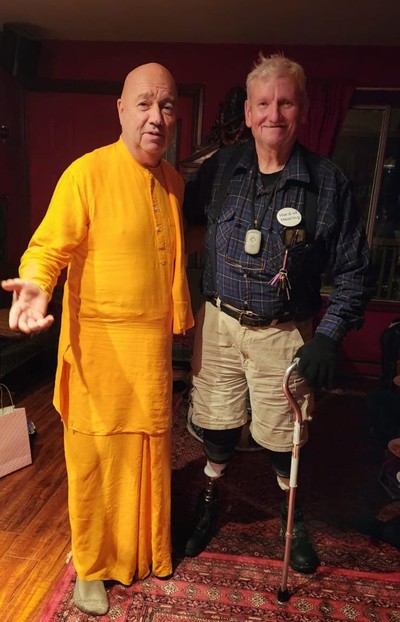 To get to this lovely town, located on Vancouver Island, you take a ferry from the mainland and sail to Nanaimo, then drive for 30 minutes. The arctic factor appears to have hit the island with snow flurries for the better part of the day and night.

At the home of Gadadhar and Manoharini I met Norm Thompson, 66, who came to our program of “Tales from the Trails.” Due to the imposing storm few people turned up, but it was Norm, who was determined, regardless of the weather, to see me. Recently, he had both legs amputated. During work he was electrocuted at his legs. Five months ago, he obtained bionic limbs. He tells a bit more of his story.

“I was 380 pounds. I became a couch potato, and would sit, clicking channels to watch TV. When I lost my two legs, it was a wake-up call. I decided I had to change my lifestyle. I now weigh 200.”

Norm went on to explain about his dieting and exercise. He is now an active man, and is Mr. Positive, believing in God. He was thrilled to hear about our coming to his hometown, and to hear us and observe what a group of us do in the bhakti yoga realm. He listened to my stories of walking the trail and partook in eating the delicious entrées prepared for the evening. He made a vow to do some trekking on the island to the tune of 300 km, after the snow thaws out. He asked for my advice on the project. I expressed to him, “Have a support person, call the media, arrange for healthy food and good sleeping at night. Do a lot of appreciative prayer when you walk.”