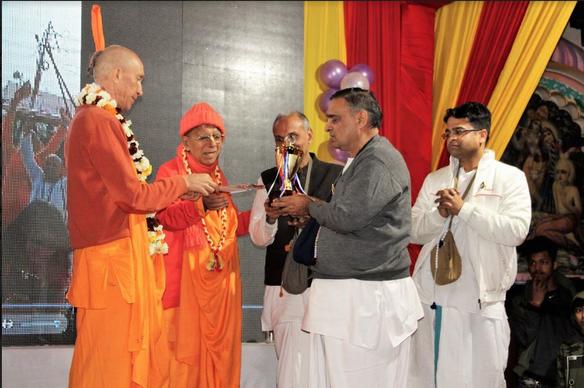 The beginning of book distribution

Krishna Bhava Das, from ISKCON Punjabi Bagh community in Delhi, 68 year old , strongly built, having a sharp gaze of determination yet having an air of simplicity around him, eldest in his family of 30 members, untouched by modern flare , who prefers to keep to his village roots and culture, a strong businessman is been one of the most enthusiastic devotee when it comes to book distribution. Over the last 10 years, he has distributed lakhs of Srila Prabhupada books and contributed to various projects of ISKCON.

He was introduced to devotees by one of his relatives approx 14 years ago and life took a different turn since then. He got initiated in 2010 and heard through devotees how much Srila Prabhupada and his spiritual master H.H Gopal Krishna Goswami Maharaja loves book distribution. Taking inspiration and gathering courage he started going door to door with his study class devotee group for 2-3 years during the December marathon and they would distribute a total of 200-250 BG as a group. 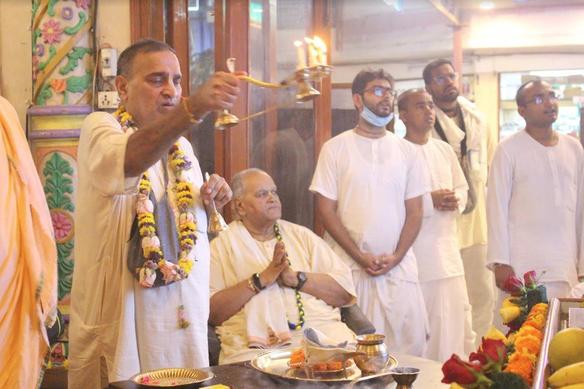 However during the month of Kartik in 2013, a seemingly small incident gave him ideas to distribute more books. There was a shobha yatra organized in their neighborhood. During that shobha yatra , one devotee approached Krishna Bhava Das, and requested him to purchase Bhagavad Gita. Out of generosity , he gave Rs 500/ as a donation and the devotee gave him 5 copies of Bhagavad Gita to gift someone from his hands.

This incident made him think that just like this devotee, he himself can distribute more than one copy to a person as well. Being in the business of construction and properties, he called out a meeting of some of his known persons and invited Keshav Murari Prabhu to address them. At the conclusion of the talk, he requested the group to help in the distribution of Gita and everyone agreed to contribute. Some 5 copies, some 11, some 21 and some 108 copies.

“That was my first experience of distributing more than one copy. I remember one person who had entered the meeting only at the very end said I will also contribute 1100. Everyone cheered and clapped for him. Only later he found out that one Gita cost Rs 100 at that time and cleared himself that I meant Rs 1100 not 1100 BG. We all had a good laugh”

One incident particularly left a remark on him. When one of his relatives was struggling with a life threatening situation and was admitted to a famous Cancer hospital, he used to visit him regularly there. He gave one Bhagawat Gita to the chief Medical officer there. The officer told him after a couple of days , “ I have read many versions of Bhagavad Gita, but I have never ever read this particular Gita by Bhaktivedanta Swami. And I can say that for the first time I am beginning to understand Gita. I never knew about Krishna and this philosophy. Thank you”

Hearing this appreciation from a totally new person, and that too such an educated and qualified doctor, left a deep remark on Krishna Bhava Prabhu. Krishna Bhava Prabhu then purchased and arranged to distribute a copy of Bhagavad Gita for all their doctors and staff.

A leap of faith

“Initially, there was some hesitation in approaching people and asking them to utilize their money for distributing Bhagavad Gita. But then I thought it’s not for me, this is for Krishna. I was confident in my heart that this is the most selfless thing I have ever done and the cause gave me strength. It’s an opportunity for others to come in contact with Krishna as well. I thought if Bhagavad Gita is mercy of Krishna, why keep my own family and relatives bereft of it. I started from from my own relatives and requested them to contribute in distributing Bhagavad Gita”

He and his younger brother, Raktak Prana Das (who is equally, if not more enthusiastic about book distribution) make a wonderful team.

They made a list of all the clients and then started visiting them along with Kadamba Bihari Das, a resident monk from ISKCON Punjabi Bagh. They would share the importance of this knowledge esp in modern times for the peace, direction and happiness of society and would request the person for his/her help in sharing this knowledge. The team indeed ran a marathon for 30 non stop days and they could distribute 20,000 copies this way in 2017.

There was this one client, who just wanted to sponsor 250 Bhagawat Gitas but did not want to distribute himself. Krishna Bhava Prabhu still sent him 250 copies with special thanks and with the printing of their company name as sponsors on the first page. Those copies were then arranged to send to Jammu for distribution. The entire incident was forgotten. One fine day, one person called their company and told them that he was about to commit suicide. Just before hanging himself, he saw a copy of Bhagavad Gita and thought to open it. Upon opening and reading for some time, he gave up the idea of suicide. He found the company number as sponsors and called them to thank them. He later got connected to devotees and is currently practicing his spiritual life.

This left a deep impression for both – the person who sponsored Bhagawat Gita and for Krishna Bhava Prabhu.

He also completed his Bhakti Shastri in the year 2015, attending and studying all classes in that advanced age, of 60s giving all slokas, CBA and OBAs. He is one of those persons who likes to quote verses from Gita during his conversations. Being inspired by his personal study of Bhagavad Gita esp by the section where Krishna is expressing his heart “one who shares this knowledge is most dear to me”, he resolved to do more in the service of Bhagavad Gita.

Krishna Bhava Prabhu, through his faith in the sastra, has been steadily increasing his distribution over the years. Over the last few years, he and his brother Raktak Pran Das (and with their family) have been distributing 20000 , 30000, 35000 Bhagawat gita in the marathon.

Being the 125th birth year of Srila Prabhupada, he strived to distribute 50,000 Bhagavad Gita and achieved that.

To distribute Bhagavad Gita during the marathon, he thinks and meditates throughout the year. He manages all the accounts of distribution, wishes all the people who are supporting in service of Krishna with genuine love and affection, and most importantly works honestly and maintains high quality work in his profession that builds trust with all his clients. His heart is full of devotion, honesty and concern for others. He spends from his own pocket giving gifts as a token of gratitude to all the persons who contribute towards this service. He has decorated his entire office with quotes on Bhagavad Gita distribution and any person entering the office is marveled by the importance of Bhagavad Gita.

Apart from distribution , he contributes to building temples and loves to serve vaishnavas in whatever way he can. He regularly sends very high quality fruits for the deities and all the devotees in the temple. One may be surprised at his recalling of various examples, analogies, philosophical concepts presented in Srila Prabhupada’s books so freely in the conversation despite him not reading all the books. These indeed are the blessings of guru and sastra for his service over the years.

“To avoid any miscommunication, side talk and conflict within family over financial spending towards the temple, we have made a system that a predetermined percentage of all our income will be spent only for Krishna and his services. We have made a separate bank account in God’s name and whatever money we receive, that percentage goes to that account. Initially we were somewhat reluctant how we would be able to do that, but surprisingly we noted that Krishna’s account is never empty.”

Due to his sharing of Krishna consciousness, currently in his family of 30 members, 11 members have taken initiation and others are also practicing. He faced two severe life crisis health situations over the last couple of years but nothing diminished his enthusiasm for serving Krishna.

His brother Raktak Prana Das recalls, “ The quality that I appreciate the most in him is that he is always ready to serve Krishna. He likes to say YES to Krishna and his service opportunities. I personally hesitate so many times and often time is reluctant but I have seen him saying YES without hesitation. He says each time.. I am just an instrument”