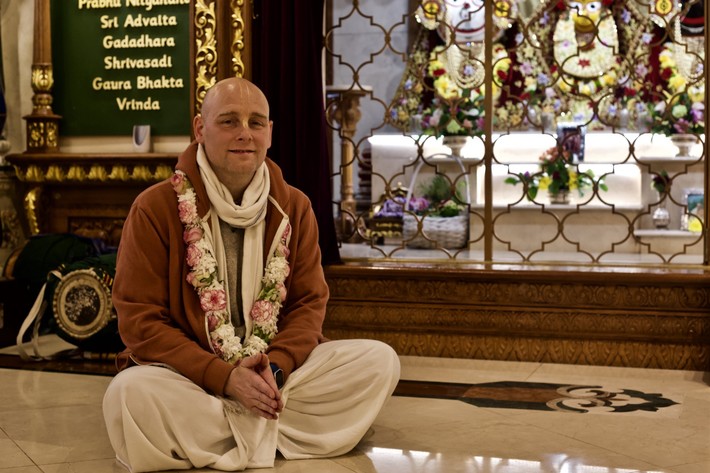 James Edwards was 16 and partying at Lollapalooza when a Hare Krishna devotee handed him a book called Easy Journeys to Other Planets.

Intrigued by its descriptions of meditation and yoga and how our spirits can transcend our material body, he says the encounter made an impression on him as a teenager. Looking back, he recalls that he felt he had found a kind of truth. “This is what I have been looking for,” he thought.

Edwards, who is now known as Jai Nitai Dasa, became a vegetarian, took up yoga, and started meditating. Back then, that was as far as he was willing to go.

Fifteen years later, he was working in investment banking in London. This was 1990s Britain, post–Margaret Thatcher, and the UK’s financial district was running with minimum government oversight and at the mercy of the free market. A lot of people were making a lot of money, fast.

Jai was riding that wave. Along with the six-figure salary came the lifestyle of sex, drugs, and rock and roll; he somehow found time to form Xiida, the band he played in with some of his closest friends. But in the back of his mind, during all the sleeping around and drug taking, he felt there was something missing. It wasn’t a promotion, or the impulse to move abroad, or even just to start living more healthily. It was a feeling of needing an elusive “something more.”

“When you earn a lot of money, and you work in that environment, the way you spend your money - it’s not the most wholesome,” Jai tells me while sitting in his office at the Hare Krishna temple in London, of which he is now president.

“I was coming into a lot of conflict within myself about the hedonistic lifestyle I was leading. Although I had lots of money and lots of things that people tick off their bucket list, I wasn’t genuinely finding deep, profound happiness.”

By then, his best friend and his wife were already part of the International Society for Krishna Consciousness. The two of them were making a quarter of Jai’s salary, and that was just fine with them.

“They somehow seemed to exhibit this sense of just peacefulness,” Jai tells me. “Apart from that, on the material level, they had four grand saved in the bank. I was four grand in debt.” “So you were living above your means?” I asked. “Man, I was living way, way above my means,” he replied without hesitation.

And yet, Jai kept on running the rat race  working hard, spending harder. The tipping point came when his friend and drummer of their rock band became ill with a serious brain condition.

“This friend of mine was a Mensa-certified genius. He was brilliant, an amazing musician, such an exceptional person. But the hedonistic lifestyle we were leading meant we were also doing a lot of partying, and that had a serious, detrimental impact on his life.”

From that moment, the question started ringing in Jai’s head even louder: “What’s going to be the payoff from all of this?”

And so, one day, he walked into the Hare Krishna’s London headquarters, four grand in debt  and became a live-in monk.

“I went off the grid for a year. Just let go of all material pursuits and just gave myself fully and submerged in the spiritual journey.”

Jai’s story is not unique. Based on the conversations I’ve had over the past two weeks, the Hare Krishna seem to have a specialty for attracting converts from high-pressured professions such as banking and law who are pining to live life on the opposite end of the scale.

On my first visit to the temple, I met a young civil engineer. He was wearing a expensive-looking suit but said he bought it in the low-end store Primark. He’d just been laid off and was looking for answers. “I just came to check what this was all about,” he said. “After being let go from my last job, I really want to kind of unplug.”

Curiously, though, Hare Krishna devotees never seem far from the grid they are trying to escape. If you have ever been to London’s Oxford Street, you will have seen them draped in orange robes, chanting, playing the tambourine, and handing out pamphlets about Krishna. Sometimes tourists join the group, singing along to the endless mantras and calling out to a god they don’t really know, just for kicks.

And here lies one of the great contradictions of the Hare Krishnas: For all their emphasis on spiritual fulfilment and parting ways with the material world, the truth is that they have become a staple of everyday London, right up there with the red buses and black taxis.

But that’s not odd at all, argues Ram Charandas, a certified accountant and the temple’s financial controller. “In fact, [Oxford Street] is the right location, because we want to go to the people. We want to tell them, ‘Look, I’ve changed my life.’ A high-paying job, or a beautiful girlfriend or wife, or a beautiful house, or money and car, they won’t make you happy.”

Ram speaks from experience  and one that is very similar to Jai; he too had all the trappings of a high-paying job in the city, and he too gave it all away. “I just felt the need to find out what life is all about.”

The Hare Krishna movement is highly organized, with temples and community outreach programs in many of the world’s biggest cities. A branch of Hinduism formally known as Gaudiya Vaishnavism, its name comes from its chant  Hare Krishna  which devotees repeat over and over. It was started in 16th-century India by Sri Chaitanya of Bengal. In the West, the religion started building a following toward the end of the 20th century in New York’s East Village, where it was nurtured and fueled by a disheveled 69-year old Indian named Srila Prabhupada.

Prabhupada boarded a freighter to the United States in August 1965 with $7 in his pocket and three self-translated religious texts. His mission was to “offer spiritual wisdom to the people of the world,” and in many ways he succeeded.

The temple has to work hard to survive. It sits on one of the world’s most expensive pieces of real estate, and there are bills to pay, mouths to feed, congregations to grow. The group’s record label, Radha Krishna Records, has produced nine albums so far, and their vegetarian restaurant runs seven days a week, open to the general public and to homeless people in need of a meal.

While reporting for this story, I have been to the temple several times and have always been welcomed in with unquestioning warmth and interest. I don’t mind admitting that I’m a sceptic when it comes to religion, yet even I found the calm and tranquility of 9–10 Soho Street very seductive. The congregation is made up of both fully fledged Hare Krishna devotees and office workers in suits, who see this four-story building  off one of the world’s busiest streets   as an oasis among the chaos of daily life.

The temple isn’t insulated from all the outside pressures of the world, however. Tech addiction encroaches even here in the temple, where there is plenty of smartphone and laptop use. During one of the prayer sessions I attended, several worshippers kept checking their messages.

“It seems like the material world plays an important part in your life still?” I point to Ram, as he checks his smartphone. But he sets me straight.

“We have Hare Krishnas who are worth 4 billion, 6 billion pounds. Hare Krishna doesn’t mean that you don’t own anything. It just means you don’t get owned by anything.”