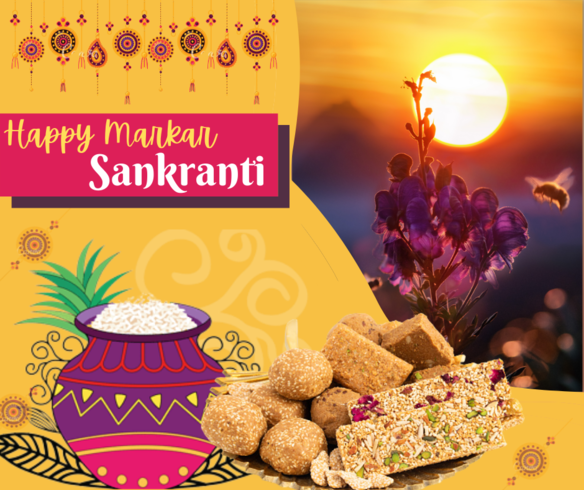 Today is “Makara Sankranti” which is celebrated when the Sun begins the northward journey, marking the beginning of the “uttaraayaNa puNyakaalam”. Sun enters the sign of “Makara”, (Capricorn) from Cancer currently. (This is also called equinox when the day and nights are the same). Starting from this day, the duration of day starts to increase until “dakshiNaayanam” comes.

Traditionally, this period is considered an auspicious time and the veteran Bhishma of Mahabharata chose to die during this period. Bhishma fell to the arrows of Arjuna. With his boon to choose the time of his death, he waited on a bed of arrows to depart from this world only during this period.  Sri Bhishma Pitamaha waited on the bed of arrows till the “uttaraayaNa punyakaalam” has arrived, and then breathed once more, for the last time. It is believed that one escapes the cycle of repeated birth and death if one gives up one’s body on this day. The uttarAyaNa (norther course of the Sun) was traditionally considered more auspicious than the dakshiNAyana (southern course of the Sun). Over the years, this led some to believe that dying during dakshiNAyana, the southern path of the sun, was inauspicious and did not lead to moksha – release – liberation.

This belief is cast aside in the Brahma-Sutras that the time of death is immaterial in the case of the intelligent devotee. In those Sutras 4.2.19-20, it is established that one who has knowledge of the Lord can die during any time; the exaltations of uttarAyaNa are merely to praise meditation on the path to Vaikuntha, which the wise devotees jIva takes upon death.  This divine path beginning with light, is presided upon by deities of greater and greater brilliance, with uttarAyaNa being one of them. This marga – path culminates in Vaikuntha, the state of moksha, and shastra says it should be meditated upon daily by the yogi of devotion.

So generally special offerings of Til (sesame) rice and corn (first harvest) are offered and distributed, especially preparations of rice kitcheri with sesame and corn are a preferred offering to the Lord on this day. In different parts of India slight variations (gauna – local traditions prevail) but the general observance is much the same. In the South of India, they absorb themselves in the festival of Pongal – new harvest festival.