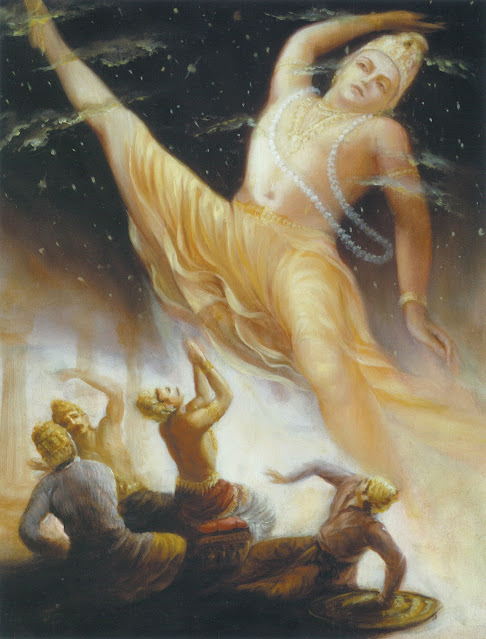 The Dwarf Incarnation of Supreme Lord

Vamana avatar, an extraordinary astonishing incarnation of Supreme Personality of Godhead appeared as the son of Kasyapa Muni and Aditi to regain the universe for His devotees- the demigods from the great King Bali who had ruled over the entire universe.

He appeared as Lord Vamana, a brahmana dwarf and tricked Bali Maharaja by asking for three steps of land. When Bali agreed to offer Lord three steps of land, the Supreme Lord acting in terms of the material energy expanded His body and covered the whole earth 🌎 with one step. With His second step He covered everything in the universe was within His body, including the earth, the planetary systems, the sky, the directions, the various holes in the universe, the seas, the oceans, the birds, beasts, human beings, the demigods and the great saintly persons. And finally, when there was no place left for Him to take His third step, Lord Vamanadeva asked Bali where should He place His third step that Bali had promised to offer to Him. Bali was fixed to satisfy Lord Vamana to fulfil his promise. He remembered the great determination of his grandfather Prahlada in devotional service. Bali Maharaja, with great humility then requested Lord Vamanadeva to place His third step on his head. Lord Vamanadeva then placed His third lotus foot step on Bali’s head, who thus surrendered 🛐 everything to the Lord. By mercy of Lord Vamana, Bali could see that the Lord is all-pervading and that everything rests in His body.

Lord Vamana was extremely pleased with the great determination of Bali of him being fixed in devotional service despite losing all his possessions.

🔸 He gave Bali the Sutala planet whose opulence is far greater than of Indra’s.

🔸 Lord Vamana also agreed to become the doorman of Sutala planet, and because this planet is especially protected by Lord, it is free from mental and bodily miseries, fatigue, dizziness, defeat and all other disturbances.

🔸 Lord Vamana, in this way also satisfied the desire of Aditi, the mother of demigods in regaining there kingdom.

Bali was the grandson of Prahlada (for whom Lord Nrsimhadeva had appeared and protected from great demon Hiranyakasipu). Although born in demonic family, he was a great devotee of Supreme Lord Krishna. Bali had performed a special Visvajit-yajna and received a celestial chariot with yellow horses, bow, arrows and celestial armour. He also received a garland from his grandfather Prahlada Maharaja, with flowers that would never fade and a conchshell from Sukracharya.