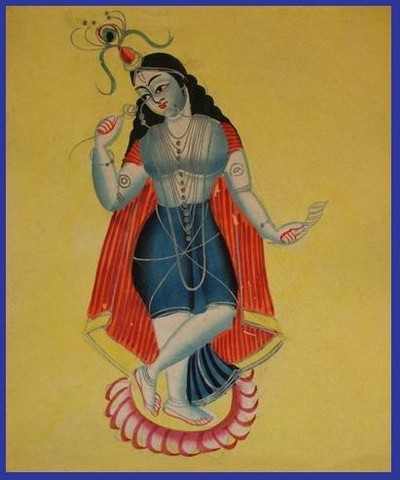 Who is Lord Balarama?

Lord Balarama is an expansion of Lord Krishna glorified in the Vedic Puranas and Itihasas. Krishna is the spiritually manifest Supreme Person, whose internal spiritual energy is the all-pervading Brahman. He is glorified as Narayana, Vasudeva, Mahavishnu, Hari, Vishnu, and many other names. Shiva and Brahma are said to be His qualitative expansions. He is the Supreme Lord, the Lord of all universes. Everything emanates from Him and dissolves back in Him. He is the cause of creation, maintenance, and dissolution of everything and every living entity. His chatur-vyuha (four-handed) expansions are Vasudeva, Sankarshana; Pradyumna; and Aniruddha. The Bhagavatam (12.11.21) says,

The primary expansion of Krishna is said to Sankarsana, the infinite snake Ananta on which the Lord rests. Sankarsana beholds all universes and maintains everything united. The descended form of Sankarsana is Lord Balarama, who appeared as the elder brother of Lord Krishna. Lord Krishna and Sankarsana are originally one, although they appear different to the external eye. Lord Balarama assists Lord Krishna in His glorious transcendental lilas. Lord Balarama appeared as the younger brother of Lord Ramachandra by the end of treta-yuga and He appeared as Nityananda Prabhu to distribute the mercy of Krishna to people with Caitanya Mahaprabhu five hundred years ago.

Once when the four Kumaras visited the bottom of the universe, they found Lord Sankarsana as a gigantic snake with numerous hoods. The Lord was seen in deep meditation beholding innumerable universes on His head. Since He holds everything together, He is called Sankarsana, the binder who unites all. Lord Shiva always meditates Lord Sankarsana as the Bhagavatam (5.17.16) tells,

“Lord Shiva, served by tens of billions of maid servants of Goddess Bhavani
(in Ilavrta-varsha), deeply meditates, chants and worships one of the four expansions of the Supreme Lord known as Sankarsana in the predominant quality of ignorance.” At the time of destruction, it is said that the fire emanating from the mouth of Sankarsana would dissolve all the worldly manifestations at the end of the universe. Therefore, Sankarsana helps Lord Krshna and causes the union and destruction of all universal manifestations. That Sankarsana appeared as Balarama and any devotee who seeks Krishna should first seek His mercy to be blessed with proper bhakti (devotion) to Lord Krishna.

Hearing the celestial voice that the eighth child of Devaki would kill the demoniac King Kamsa, he killed all the children born from Devaki. Mother Devaki was in deep distress during her seventh pregnancy because she felt the child would be divine in nature. To allay the fear of Devaki, Lord Krshna called Yogamaya and told her to transfer the child in the womb of Rohini, another wife of Vasudeva living in Nanda Gokula. Suddenly Devaki felt loss of her pregnancy while Rohini sensed pregnant. When Garga Muni, the kula-guru of the Vrishnis, visited Nanda Gokula, Rohini met the saint and he said, “Your child’s father is your husband Vasudeva and he will grow into a strong and beautiful divine boy.” After the birth of the child, Garga Muni again visited Nanda Gokula and named Him Rama (the one who brings piety and prosperity). Garga Muni also said that He would grow very strong and become famous as Bala as well. Since He is the common child lived in the wombs of Devaki and Rohini and therefore he would be called Sankarsana because he would unite people and He would be known as Dauji being the elder brother to Krshna.

Balarama grew up into a handsome and powerful youth. He was gaura (fair in complexion) and adored always in blue. He preferred the colour blue because it resembled the embodiment of the Supreme Lord Krshna. He wore a bejewelled necklace, flower garlands, long ear rings, and tied His graceful hair on head. He also wore splendid armlets, bracelets and anklets. He applied a tilaka on forehead and wore a gunja on chest. He had long arms and His voice was grave like rumbling of clouds. His splendid embodiment defeated the beauty of the rising moon and His awesome power could destroy many mighty armies and even the whole world. Balarama always carried a plow on hand as His weapon. Krishna and Balarama moved together from childhood and He rarely remained separate from the Supreme Lord and always participated in the nectarine lilas of His Younger Brother.

Balarama married Revati, the daughter of King Raivata, who lived in sattya-yuga. Unable to find a suitable match, the king and his daughter visited Brahmaloka and met Lord Brahma and sought his opinion. Lord Brahma advised to solemnise the marriage of Revati with Balarama. People of sattya-yuga were much taller and when they returned, Balarama shrunk the size of Revati placing His plow on her head.

Lord Balarama always participated in the Krshna-lilas. The lilas of Krshna-Balarama are in the tenth kanda of Srimad Bhagavatam a few of them are briefed here. Balarama destroyed the demon Dhenuka appeared as a powerful ass and denied the Gopas the fruits of Talavana. Balarama destroyed the assistants of Dhenuka hurling them on treetops and did the same to Dhenuka as well and killed him. The tala trees bent down in supplication and offered fruits to the celestial siblings and the Gopas.

Once while playing with the Gopas in Vrindavan, the demon Pralamba arrived in disguise like a Gopa and played with them to kill the divine boys. The looser would carry the winner on shoulders was the bet. Pralamba lost the game and he carried Balarama on his shoulders. When the demon assumed strength, Balarama became a shade heavier than him. Unable to carry further, the huge demon took to the sky and grew gigantic. Balarama hit on the head of Pralamba and instantaneously killed him.

When both Krishna and Balarama moved in the forest, the trees adored them bending down to touch their feet. Krishna often said, “Even the trees and divinities want to touch the lotus feet of Dauji to receive His blessings.” In fact, the great sages took the form of trees to grace the lotus feet of the divine brothers. It is said that Krishna often massaged the feet of Balarama while He took a brief nap in the jungle resting his head on the lap of their cowherd boy friends.

While living in Dwaraka, once Balarama visited the Vrajavasis at Vrindavan and enjoyed the pastimes with the Gopis on the bank of Yamuna. He drank the juice of the Varuni tree and wanted to enjoy water sport with His friends. He called on Yamuna, but she didn’t respond. Balarama took His plow and dragged Yamuna and soon the goddess of Yamuna appeared and begged to forgive her. After taking bath, Lakshmidevi appeared and offered new clothing to Lord Balarama.

Shamba, the son of Lord Krshna and Jambavati, loved Lakshmana, the daughter of Duryodhana (the eldest among the Kauravas) and lived incognito in Hastinapura. The Kauravas arrested the valiant Shamba and imprisoned him. Balarama went and requested to free Shamba and solemnise their marriage, but the proud Kauravas disobeyed Him. He immediately took His plow and began to drag Hastinapura into River Ganga, Seeing the disturbances, the Kauravas agreed for the marriage, and Shamba and Lakshama returned to Dwaraka with massive gifts.

Balarama was Sankarshna and therefore he opposed the Mahabharata war. He approached both the Kauravas and Pandavas not to war seeing their destruction thereafter. The proud Pandavas never listened to Him. Therefore, Balarama went on a pilgrimage to tour the entire Bharat-varsha. He visited Naimisaranya and sage Romaharshana, giving a lecture of Bhagavatam in the assembly of great sages, did not get up to greet Him thinking His visit was to listen to the lectures. In bit of rage, Balarama withdrew his life using a blade of grass and gave him refuge and deliverance in the Supreme Lord. He then proceeded his journey.

Lord Balarama retreated from this world at Prabhasa Kshatra on the bank of River Ganga. A snake emerged from His embodiment and entered in the holy waters of Ganga. Thus Balarama returned to Goloka Vrindavana as Sankarsana. Anyone who fasts and listen to the glories of Lord Balarama and Lord Krishna on the day of Balaram-Jayanti and sing in praise of Them will verily become eligible to live in Goloka Vrindavan and witness their divine nitya-lilas eternally.