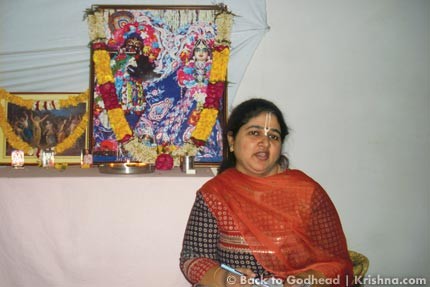 “Whom are we worshiping in the temple? This query of mine was unanswered till I reached ISKCON.”

I was born and brought up in a Hindu family in Delhi, and we used to go to various temples and offer prayers before the gods. Two questions, however, always tickled my mind: Why do we worship so many gods, and who is the real God? As I never got answers to my questions, I considered all the gods equal, and in my teenage years all religions and faiths became one for me. Be it Hinduism, Jainism, Buddhism, Sikhism, Islam, or Christianity, all pointed towards one God. But I could not find out who this God is.

During my school days, when I badly needed the help of God I would cry out to Him, but no name would come on my lips. Sometimes I wondered whether God has any name, and slowly and steadily I felt that God has no form or name but is a supernatural power—a powerful light we cannot see but can only feel. Then whom are we worshiping in the temple? This query of mine was unanswered till I reached ISKCON.

After completing graduate degrees in microbiology and law, I earned a masters degree in company law. In the meantime I married a close friend I had met while pursuing my masters degree. Soon I started working for a multinational corporation in Delhi. My office was about two kilometers from the ISKCON temple. Even though I passed the temple on numerous occasions, my feet never took me inside to see the Lord.

After four years, in the year 2000, I joined another company, which was farther away. I left there within two years, after I got pregnant. While leaving the job, one of my colleagues, an ISKCON member, gave me a copy of Srila Prabhupada’s Bhagavad-gita As It Is. This was the first time I ever read the Gita. As I could not understand this scripture, I kept the book in my study and left it untouched for the next seven years. Today, however, I feel that because of this book, in November 2002 I was blessed with a baby girl, Gaurika, who showed spiritual inclinations from an early age.

In March 2008, my daughter and I were visiting the local temple in the evening to say our prayers. While coming out of the temple, I saw Hare Krishna devotees passing out pamphlets. When I eagerly approached them, I learned that they would be conducting a six-day Bhagavad-gita program in April. The venue was at a short distance from our residence.

“This is a life-changing program,” a devotee told me, and she suggested I register at the earliest.

“I will check with my husband and get back to you shortly,” I said.

I kept the pamphlet on a side table in our home, planning to discuss it with my husband, Deepak, when he returned from the office. He has a hectic job, working from 9:30 in the morning till 11:00 at night. Because of this, he had been pretty disturbed for the past two or three years. He was looking for peace and happiness but couldn’t find it even with the best salary. Because my husband arrived home late, I could not discuss the program with him for the next ten days. But unknown to me, he had read the pamphlet and had made up his mind to attend the program.

In the meantime I forgot both the pamphlet and the program. Then one morning my husband asked me to get him registered for the program and also gave me the option to attend.

Initially I thought, “Let him attend the course, and if he finds it useful, I will attend at a later date.”

I called up the devotee to check the availability of a seat for my husband. She mentioned that a few seats were still available and advised me to attend the course with him. I made all sorts of excuses for not attending, but the devotee convinced me to attend and even bring my daughter for all six days. The next morning the devotee visited our residence and registered us for the course on payment of a nominal fee.

At 5:00 o’clock in the evening I called the devotee and said, “Please cancel my registration.”

She was surprised with this last-minute development.

“What is problem?” she asked.

I made all sorts of lame excuses, but she would hear nothing of it. She finally convinced me to attend. So, along with my husband and daughter, I attended the course, which changed my life.

On the first two days of the seminar, I was full of confusion. But as the seminar progressed I learned there is a difference between the Supreme Lord and the various demigods. Eventually I got answers to my query as to why at times we suffer due to our karma and on other occasions we are blissful. Lord Krishna has explained in the Bhagavad-gita that this place is duhkhalayam, full of miseries, and we can never find the real happiness we are searching for. Until we realize that Lord Krishna is the Supreme Personality and we are part of Him, we can never be happy. By rendering devotional service at the lotus feet of Lord Krishna, we can be freed from the material entanglements and go back to Godhead.

I was amazed to discover that although God was always there in front my eyes, I could not recognize Him. Even though I was born in a Hindu family, it took thirty-six years of my life to know that Lord Krishna is the Supreme God, the cause of all causes.

As I was growing up, whenever my family was in distress we would worship one of the demigod to cancel the ill effects. We would go to the temple with a long list of demands. But when my husband and I attended the ISKCON seminar, we were taught to become pure devotees and to surrender unto the lotus feet of Lord Krishna. In the Bhagavad-gita (18.66) Lord Krishna says, “Abandon all varieties of religion and just surrender unto Me. I shall deliver you from all sinful reaction. Do not fear.” Watering the roots of a tree will satisfy its leaves, branches, twigs, and trunk. Similarly, when we take the shelter of Lord Krishna, the Supreme God, we satisfy all the demigods. If out of fear we fail to surrender, we get entangled in the vicious cycle of birth and death.

At the end of seminar, the devotee teaching us advised us to chant the holy name daily and gave a formula to remember:

A: Association of devotees
B: Books by Prabhupada
C: Chant the holy name
D: Diet should be only prasadam, vegetarian food cooked for and offered to Lord Krishna.

After the six-day seminar, my thoughts were clear. It seemed a layer of dust had been removed from my eyes and I could finally see. I started attending weekly classes and reading Bhagavad-gita. Vicitra Krishna Dasa would stress the ABCD formula. I was not totally convinced about chanting, and hence did not start it immediately. Instead I took up reading small books written by Prabhupada and associated with devotees every Sunday. Then one day I read Chant and Be Happy, where the famous musician George Harrison gave a candid interview on how chanting changed his life. I was totally moved by his story and understood the power of chanting.

I took up chanting one round on beads every day, and gradually increased it to six or seven rounds, and soon to sixteen rounds. Part of my inspiration for chanting sixteen rounds was that I wanted to help cook the Sunday feast at the temple and cooks are required to chant sixteen rounds.

I was soon given the service of calling participants for the Sunday program. I enjoyed that service a lot. It gave me a chance to speak to various devotees and hear of their progress in Krishna consciousness. These conversations motivated me and helped me realized how important it is to associate with devotees.

My life has changed in a short time. As I need to arrange the breakfast and midday meal for my daughter and prepare her for school, I get up at 4:30 A.M., bathe, and perform tulasi puja. I leave for a walk by 5:15 and chant six rounds while walking. After returning, I wake up my daughter and prepare her for school. She chants one round a day, and when we visit Sri Vrindavan Dhama, she chants more than sixteen rounds.

I definitely feel that due to the Bhagavad-gita I received during my pregnancy, I was blessed with a Krishna conscious daughter. I feel that due to her devotion in her previous birth, we were brought into the process of Krishna consciousness. Though it took me thirty-six years to realize who Supreme Lord is and to chant His holy name, my daughter started chanting when she was five and a half years old.

Spreading the Message with Gratitude

Today, by the mercy of Lord Krishna and the guidance of senior devotees in ISKCON, I am able to chant sixteen rounds and follow the principles laid down by Srila Prabhupada. I attend Bhagavad-gita classes every Sunday, organized by Vicitra Krishna Dasa. I am reading various books printed by the Bhaktivedanta Book Trust, and I have subscribed to Back to Godhead. I am thankful from my heart to the devotee who at every step insisted I attend the seminar. I am highly obliged to all who are guiding us to understand our relationship with the Supreme Godhead and the mission each one of us has in our life—to go back to Godhead.

In today’s life we are all so occupied in our professions that we hardly wish to know ourselves and our relationship with God. Not very long ago I used to think, “Why do I need to understand all this? I am only thirty-six years old, with a daughter of five years. I can learn this subject later in life.”

I had made knowing God part of my retirement plan. But today my views have changed. I feel I am already very late in life and should have understood these things much earlier. King Prahlada became a devotee at the age of five. Devotion is not a retirement plan.

To change this understanding in others, I write about Krishna consciousness and send emails to friends and family every day. If I can change the mindset of even one person, I will be successful in helping Srila Prabhupada spread his message.