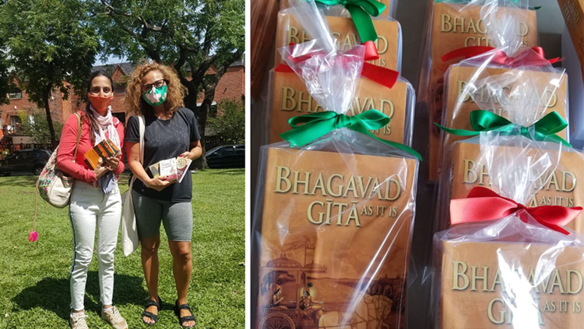 Devotees around the world are aiming to distribute at least two million Bhagavad-gitas during the last quarter of 2020, as part of the Prabhupada marathon and the Live to Give campaign.

The campaign will culminate with World Gita Day (also known as Gita Jayanti) on December 25th. To mark the occasion, there will be a live Zoom broadcast wherein ISKCON communities from all over the world will glorify the Bhagavad-gita As It Is in creative ways, concluding with a COVID-safe fire yajna broadcast online from Kurukshetra, where the Bhagavad-gita was spoken over 5,000 years ago.

“We felt that since devotees have been successful during the pandemic in distributing books through alternative means, this is an excellent time to extend ourselves in those new channels in order to develop a bigger capacity overall for ISKCON book distribution,” says Vaisesika Das, Global Duty Officer for Book Distribution.

With a unified target of 2 million Bhagavad-gitas, the BBT Marketing, Communications and Innovations team behind the campaign has been meeting virtually with GBCs, BBT Directors, temple presidents and leading sankirtan devotees in every continent to help set goals and share best practices.

“Our philosophy is that everything works better when we’re together, with a combined goal,” says Vaisesika.

As of December 10th, devotees in 30 countries were participating, while 1.47 million Bhagavad-gitas had been pledged.