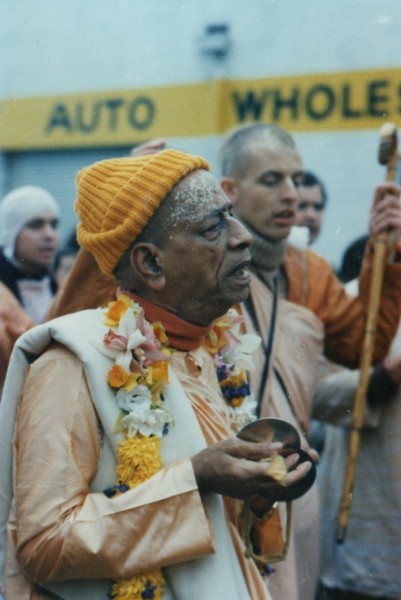 This is the 1974 Ratha Yatra in Melbourne, Australia. Prabhupada walked and did little dance steps the whole route without riding in the Ratha Yatra cart. On the evening of this day when I was mas saging Srila Prabhupada’s legs he remarked to me, “You were dancing nicely today”. His own dancing inspired me to dance and here I am yielding his cane while he plays karatalas. He is wearing flashy silk clothes, a white cadar and varied col­ored hat and turtle neck. A Gaudiya-matha san nyasi once cor­rected me for wearing a grey cadar with my san nyasa cloth. He said a san nyasi should wear all strictly drab brick-dyed saf fron clothes, even down to his cadar, jacket and shoes. Aware that Prabhupada varied his clothes he added, “Your Prabhupada can wear any clothes because he is a maha-bhagavata.” And it’s true Prabhupada didn’t strictly con form to only one shade of saf­fron in all the arti cles of clothes he wore. Here he looks hand­some and “dressed up” for the occa sion of the fes tival. He mostly didn’t choose his clothes but accepted the arti cles of clothes the devo tees made for him. He was a nat u rally stylish dresser. The cadar is draped in a neat column over his right shoulder, the knit cap is worn at a rakish angle and the turtle­neck jersey seems befit ting a young man. He was really “dressed to kill”, with his fore head smeared with san dal wood paste and a beau tiful, full gar land grace fully worn around his neck. He has silk cords wrapped around his karatalas and he is really absorbed in singing. The fact that he has aban doned his old man’s cane makes it even better. And what you can’t see in the pic ture is that he’s sur rounded by dozens of per sons keeping step with him and cel e brating the fes tival of the carts where Lord Jagannatha, Baladeva and Subhadra are led by Their pure devotee cel e brant and dance master. What a glo rious day!