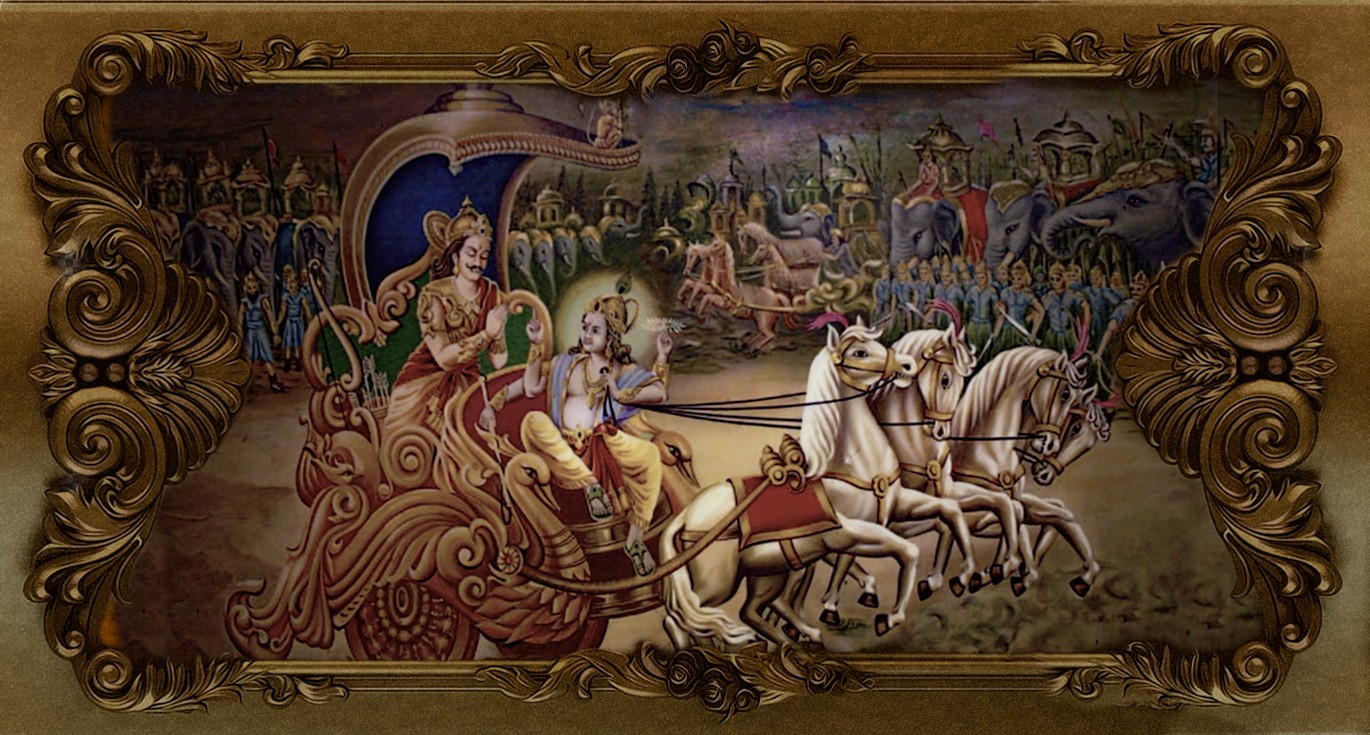 At the battlefield of Kurukshetra, Arjuna put aside his weapons and with tears in his eyes looked at Krishna expecting compassion. But in return he got chastisement. Tears of sorrow did not impress Krishna but rather it displeased him. If a child refuses to appear in an exam then his mother won’t be sympathetic although her child may give several reasons for not giving the exam. Mother being the best well -wisher of her child knows how important exam is for her child’s career.

Krishna being the best friend of Arjuna expected him to exhibit exemplary qualities befitting a great personality. Tears of lamentation, moroseness and reluctance to do once ordained duty isn’t appreciated by Krishna. These are the qualities of people in mode of ignorance. And devotees are expected to come to mode of goodness which is characterised by enthusiasm, hard work, patience and perseverance. Off course devotees of the Lord do their duties keeping Lord in the centre so they rise above goodness.

The celebrated devotees of the Lord are not those who gave up their responsibilities whimsically but are those who were highly dedicated and devoted in their duties. Victory or defeat never bothered them; they were just driven with a service attitude to please the Lord. Jatayu fought ferociously but lost the battle with Ravana but won the heart of Lord Rama.

We generally lose the crucial battle of life not because of lack of skill or any external circumstances but we lose because we are internally too weak or too tender hearted to overpower our emotions. We fail to take right decision at the right time. We prefer remaining captivated by our own reasoning or else remain more concerned about other people’s reactions to our decisions.
Arjuna gave various reasons not to fight:
How can I fight against my dear grandfather Bhisma, adorable gurus like Drona and Kripa, my relatives and friends.
If I fight and become cause of their death then I will incur sins.
Even if I am able to win the war then how will I enjoy the kingdom in absence of all my friends and family members?
War will lead to destruction of dynasty which will lead to overall devastation of family tradition which will give rise to irreligion.
Luckily Arjuna did not allow his own reasoning to subdue him but he without delay sought Krishna’s advice.
Krishna gradually and systematically removed Arjuna’s ignorance. He step by step took Arjuna to the path of righteousness and finally revealed the highest knowledge to achieve highest perfection.
First Krishna educated Arjuna about the science of soul. “You are not this body but a soul currently occupying a body, as a soul you are eternal and so are all the living beings. Soul never dies; it just transmigrates from species to species as per their karma.” (Bhagavad Gita 2.20- 2.25)
As a Kshatriya it is your duty to protect the religious principles, so you should fight. If you forego your duty then you will suffer the consequences. B.G. 2.33
There is no glory in not doing your prescribed duty. If you fight and win then you will enjoy the kingdom and if you lose and die in the war then you will attain heavenly kingdom and enjoy heavenly pleasures. B.G. 2.37
Perform your duty equipoised abandoning all attachment to success and failure. By doing so you will free yourself from the results of work in this material world and you can free yourself from the cycle of birth and attain and attain liberation. (B.G. 2.48 – 51).
And finally, Krishna imparted the highest knowledge to Arjuna – “Work for me and offer all the results of work to me. If you do so then you will surely attain me and return to my kingdom where there is no misery, no envy, no disease and no death.” B.G. 9.27 – 9.28. By this time Krishna had already revealed to Arjuna that he is the Supreme Personality of Godhead.

After speaking elaborately and eloquently, Krishna did not impose his will on Arjuna. He gave Arjuna a choice to follow him or not to follow him. Krishna said, “Thus I have explained to you knowledge still more conﬁdential. Deliberate on this fully, and then do what you wish to do.” B.G 18.63

Arjuna had cast aside his weapons, had refused to fight and with tearful eyes had asked for Krishna’s counsel. But now after hearing Krishna, he was thoroughly enlightened and without any doubt and hesitation, he picked his weapon and with renewed vigour and determination looked into Krishna’s eyes and said, “My dear Kṛishna, O infallible one, my illusion is now gone. I have regained my memory by Your mercy. I am now ﬁrm and free from doubt and am prepared to act according to Your instructions.” ( B.G. 18.73)

Arjuna’s tears were wiped by Krishna’s grace and he ultimately won the battle for Krishna. In our life too challenges will come bringing tears in our eyes but we should not get torn apart by any unpleasant circumstances. We may not have the fortune to have Krishna with us in his original transcendental form. But if we take shelter of Gita’s life transforming message then we would experience Krishna’s presence in our life and we too will find solutions to our problems and get tremendous strength to do our duty with grit and enthusiasm. And we also will then become competent enough to do something wonderful in this world to please Krishna, just like Arjuna.

(Purushottam Nitai Das is a member of congregation at Iskcon Kolkata. He blogs at http://krishnamagic.blogspot.co.uk/)