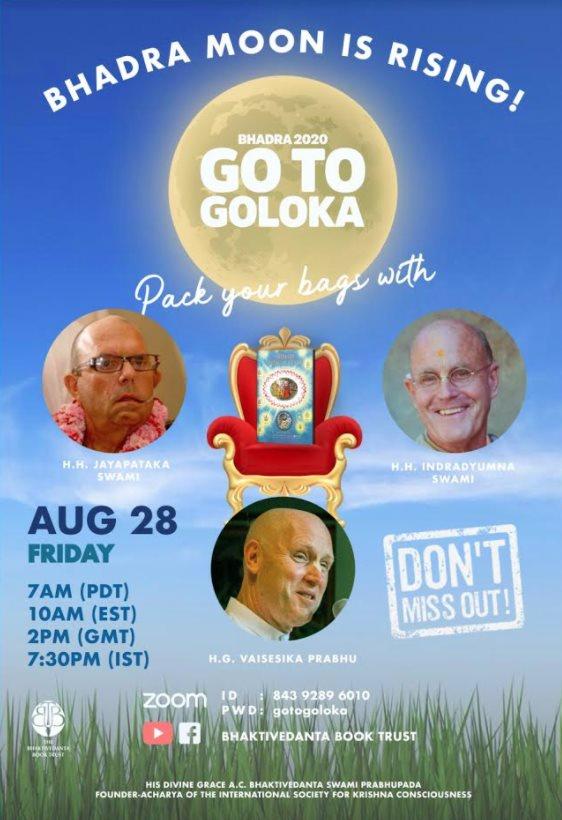 Something amazing happened last Sunday, 23 August 2020. More than 500 sankirtana leaders from across the world joined a global Zoom call* 1at 7:30 PM IST. The occasion? “Go To Goloka” – a concerted campaign for the upcoming Bhadra Purnima (2 September 2020) when more than 10,000 sets of Srimad Bhagavatam will be distributed and placed around the world, flooding these dark and turbulent times with the transcendental light of Srimad Bhagavatam.

Led by HH Radhanath Swami Maharaja, HH Bhakti Raghava Swami Maharaja, HG Bhima Prabhu, and HG Vaisesika Prabhu, the online meeting evoked great inspiration in the attending devotees for both relishing the Srimad Bhagavatam and for vigorously distributing it to others as part of the ongoing Global Bhadra Purnima Campaign 2020.

HH Bhakti Raghava Swami Maharaja highlighted the need for distributing Srimad Bhagavatam in every town and village. “When leaders come together in a heartfelt spirit of cooperation, the four movements of ISKCON can progress together.” His Holiness stated that placing Srimad Bhagavatam sets in villages is a powerful first step in re-spiritualizing them. He said that the Srimad Bhagavatam gives people a window to the Vedic culture and it teaches us how to live, and we should demonstrate the practical application of the Srimad Bhagavatam philosophy, especially in the context of our modern world. Pledging support to the Campaign, His Holiness announced that the ISKCON Daiva Varnasrama Ministry (IDVM) – India shall sponsor 108 sets of Srimad Bhagavatam to be placed in 108 villages across India, which His Holiness has toured through in the last few years.

HG Bhima Prabhu, a veteran sankirtan leader and current head of Bhaktivedanta Book Trust (BBT) – India recounted the fervor with which books were distributed in the times when Srila Prabhupada was personally present. He says “Last October, Vaisesika Prabhu and the team took a sankalpa to distribute 10,000 sets for Bhadra Campaign 2020. At that time, it seemed like the bar was set too high, and as the lockdown emerged, I wondered how this would be possible,” he said. Saying that, “As followers of Srila Rupa Goswami, we understand that there is no material impediment to pure devotional service,” he recounted how devotees in Northern Ireland once continued to distribute books even as a war raged on around them. By the inspiration of HH Gopal Krishna Goswami Maharaja and HG Vaisesika Prabhu, we at ISKCON Juhu are set to distribute more sets than we did last year. ISKCON temples in New Delhi and Mayapur temples have also set high goals. Now, it seems like the global goal of 10,000 sets will be met by temples in India itself! 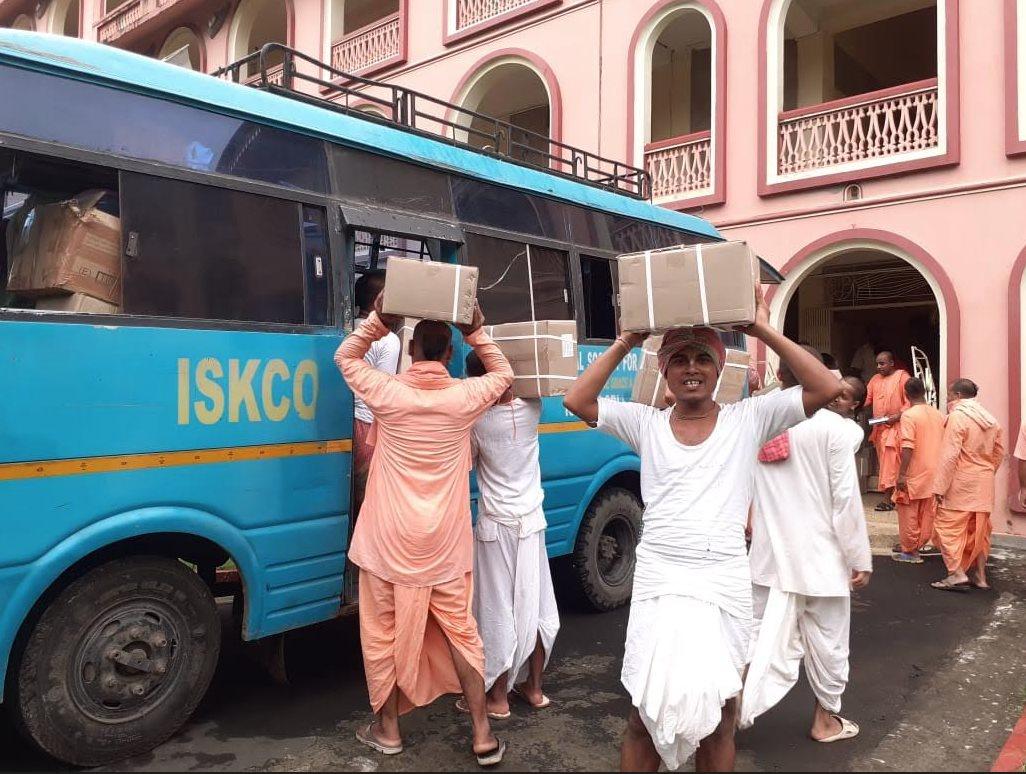 HG Vaisesika Prabhu, who leads the Global Bhadra Purnima Campaign, informed the audience that “a special Narasimha Sudarshana Yagna will be held at Ahobilam on behalf of all the participants who donate and distribute sets of Srimad Bhagavatam.” HG Vaisesika Prabhu appreciated HG Bhima Prabhu for his calm and steady service to the BBT-India and to the team of leaders across the world including HG Sri Rama Prabhu, HG Divya Nama Prabhu, and others who have been actively coordinating the global campaign. He also outlined four ways in which to participate in the campaign this year:

1. By purchasing one or more Srimad Bhagavatam sets.

2. By gifting one or more Srimad Bhagavatam sets to people you know.

4. By referring 5 or more contacts who will potentially purchase a Srimad Bhagavtam set.

To participate in the campaign and find useful resources, please visit the website www.bhadracampaign.com or write to info@bbtbooks.org

It is not too late! Jump on board now and attend the upcoming call on 28th August at 7:30 PM (IST) with HH Jayapataka Swami Maharaja and HH Indradryumna Swami Maharaja!